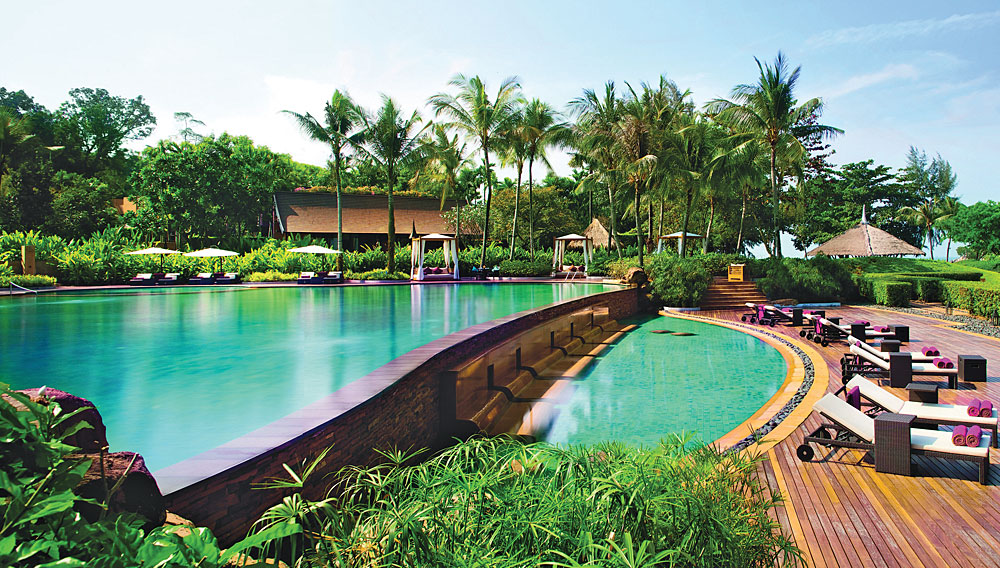 The fantasy that is Phulay Bay begins when you first set foot in the resort, where gigantic-scale architecture and a storybook color palette may have you thinking you have fallen down the rabbit hole with Alice. Opened in December on the Thai island of Krabi—where massive jagged limestone formations rise from the Andaman Sea just offshore—this otherworldly beach resort represents an equally dramatic step for the Ritz-Carlton brand.

Five years and some $100 million in the making, the 54-villa property is the Ritz-Carlton Hotel Co.’s first project in Thailand, and the first resort worldwide to open under its new Ritz-Carlton Reserve banner. This nascent collection of boutique, ecologically friendly resorts is intended to surpass even other Ritz-Carlton destinations in terms of service, dining, and accommodations, and emphasizes properties that are perfectly attuned to their surroundings.

To this end, Ritz-Carlton enlisted prolific Thai architect Lek Bunnag to fashion Phulay Bay, where a teak arrival pavilion appears to float above a reflection pool and purple-walled courtyards feature Moorish-style cutout windows. Bunnag’s most detailed work can be found in the resort’s 16 Reserve Villas, each of which is unique: One may offer a rooftop patio overlooking the surrounding karst-studded waters, while another might feature a sand garden (patterned daily by hand) and a fishpond bordered by betel-nut shrubs and bamboo. Inside the Reserve Villas, everything is larger than life, from the 13-foot-by-6.5-foot beds to the giant frangipani-shaped terrazzo tubs and the massive teak doors, the latter of which are decorated with Lanna-style murals painted by artists from northern Thailand.

Despite the proportions, Phulay Bay is as exclusive a resort as they come. The remote location—at the base of craggy hills, a 30-minute drive from Krabi Town—guarantees privacy on the resort’s small, rock-strewn beach. That there is an average of six staff members for every guest does not diminish the solitude. Quite the opposite: Service is as unobtrusive as it is thorough.

Personal butlers take care of everything from chartering a longtail boat for a sunset cruise to arranging bespoke spa treatments or a one-on-one yoga session in a coconut grove. The resort’s cooking classes can enlighten you on the secrets of Thai cuisine, but with six restaurants and bars at your disposal—including a chic lounge frequented by a baby elephant—you may not want to spoil the fantasy. ($600–$2,000)