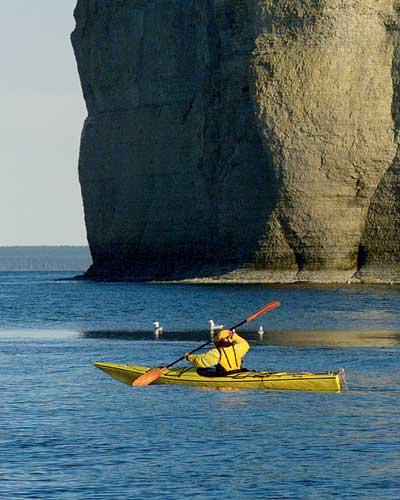 In the fall of 1975, bad weather forced Canadian Jean Gagnon, an experienced bush pilot, to land his plane on Anticosti, a Jamaica-sized island at the mouth of the St. Lawrence River. Long known as the Graveyard of the Gulf, Anticosti had claimed hundreds of ships along its 360 miles of coast, but Gagnon’s troubles turned out to be more bureaucratic than cataclysmic. First, the Quebec government, owner of the island, impounded his plane because he landed without permission. Then, while stranded, Gagnon realized the island’s potential and applied for a license to run deer-hunting trips. Ten years of negotiations with the government ended with Gagnon securing an outfitters license and purchasing 400 square miles of the island’s boreal forest, home to salmon-filled rivers and North America’s densest population of deer.

The main lodge at Anticosti Exclusive Domain, Gagnon’s island-based outfitting operation, is the hub of this sportsman’s paradise. Directly below the lodge’s deck, the Salmon River enters the Atlantic, and deer swim to a narrow spit of land beyond the mouth to feast on seaweed that has washed up on the beach. To the north, five precipitous limestone capes, reminiscent of the white cliffs of Dover, frame deep horseshoe-shaped bays where fishermen compete with seals for a variety of marine species. Inland, the Salmon River forms 16 pools that anglers reach by helicopter during the namesake fish’s spawn. The terrain also includes 500 miles of forested trails suitable for hiking, four-wheeling, or, in winter, snowmobiling.

Anticosti is not an entirely private property—a 250-resident village occupies a patch of coast on the opposite end of the 3,200-square-mile landmass—but given the difficulty of overland travel on the island, the resort offers seclusion practically unparalleled in the sporting world. Never is this more evident than during deer season, when each hunter roams his own fiefdom of 10 square miles in search of whitetail.

Strenuous outdoor activities demand hearty meals, and in the Anticosti kitchen, everything is fair game—even the meat of a freshly trapped beaver. Cut into cubes, marinated in oil and fine herbs for two days, and then baked slowly, the meat tastes like rich beef tenderloin, especially when paired with a Cabernet suggested by the lodge’s sommelier.

Fine Quebecois cuisine with a heavy French accent. Every dish, from

goose and salmon to venison and beaver, comes with a sauce.

Helicopter to one of the many waterfalls on the Salmon River and hunt for the 400-million-year-old marine fossils lining its shores.

A three-day rental of Anticosti Exclusive Domain costs $145,000 and includes exclusive use of the resort’s helicopter. Guests can also reserve individual rooms in the lodge, with prices beginning at $400 per night.