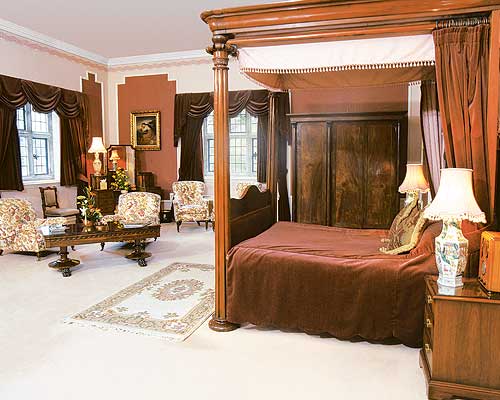 Returning from a day at Waterford Castle’s golf club—the only 18-hole,  championship-caliber course at a private island resort—the golfer who runs afoul of the hilly parkland terrain and subtly contoured greens notices not the brightly colored pennants atop the castle’s battlements, but the rooftop gargoyles and their mocking grins. Such a greeting, however, belies the castle’s many charms, which enable its guests to shrug off even the most dispiriting rounds.

Set on a 310-acre island in the Suir River, a five-minute ferry ride from Waterford, Ireland, the resort consists of the golf course and the castle, the latter of which was built in the 15th century for the Fitzgerald family, whose lords were, at the time, Ireland’s royalty in all but name. In the castle’s grand entrance, which now serves as a hotel lobby, a 25-foot vaulted ceiling towers over graceful arches and massive tapestries affixed to Portland stone walls. Standing with a glass of five-grained Irish whiskey in hand, you are inclined to follow custom and raise a toast to the founding family, whose stone-carved coat of arms holds the place of honor above the cavernous fireplace.

In the lounge adjacent to the lobby, enormous 19th-century oil paintings depict jockeys atop racehorses at full pace, and in the oak-paneled Munster Room, where dinner is served, miniature gold-shaded lamps illuminate menus well-stocked with seafood. A sweeping staircase leads to Waterford Castle’s five suites and 14 bedrooms, several of which offer views of the course from their king-size, four-poster beds. The beds are ideal spots for contemplating the next morning’s round and how perhaps the golfer, not just the gargoyles, will be grinning at the end of the day.

South of Waterford, Ireland, in the Suir River.

The 18-hole Waterford Castle Golf & Country Club is a two-minute stroll from the hotel. Other activities include hiking, birdwatching, tennis, and croquet.

Waterford serves full Irish breakfasts with, for the intrepid, black pudding, and seafood-centric dinners, several of which (including the broiled sea bass on a bed of soba noodles) are light enough not to interfere with an early tee time.

Take the ferry into Waterford for a tour of the city’s crystal factory or, for a truly Irish experience, grab a pint of Guinness and try your luck at the Tramore racetrack.