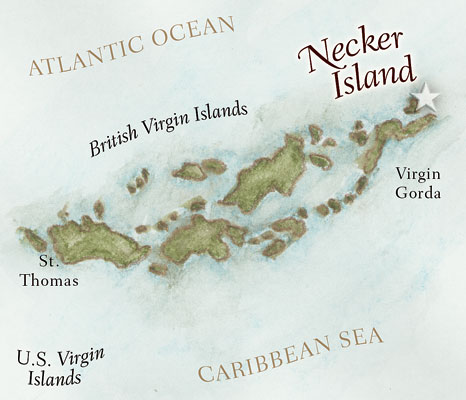 Necker Island, a Caribbean resort owned by Virgin conglomerate founder Richard Branson, is known for pampering privacy-seeking vacationers, but almost half of its 56 employees tend plants, not guests. While conducting a tour of the island, gardener Thomas James identifies the plants that Branson’s team imported: the palm trees, hibiscus, bougainvillea, flamboyants, and almost everything else on the 74-acre island that flowers or fruits. “Some hardwoods and cacti were already here when Branson came,” says James, “but he brought palm trees and flowering plants.”

Pausing before a tenuous-looking shoot, he identifies it as both a pineapple tree and an experiment. If it fails, James and the other gardeners still can count among their successes Necker Island’s breadfruit, avocados, sugarcane, mangoes, and almonds. Some island produce, such as the limes and coconuts, garnish drinks prepared at the bars, while passion fruit and aloe vera are used in treatments at the spa.

The island, which Branson purchased in 1982, is named for one of its few indigenous plants, the neckerberry tree, which produces reddish brown, inedible berries. The tree and its inability to provide any sustenance symbolize the work required to transform the island into Branson’s vision of paradise. Indeed, prior to his arrival, Necker Island lacked freshwater, rendering it uninhabitable until Branson added a desalinization facility. Although the island was barren, it did grant Branson a blank slate to develop as he saw fit.

Originally built for Branson and his family, the resort began accepting guests in the late 1980s and has evolved to accommodate their needs, says General Manager Martijn Brouwer, recalling that when a guest lost his wedding ring during a game of tug-of-war last fall, the resort purchased a metal detector. (The ring was found a week later.) “We don’t add for the sake of adding,” says Brouwer. “We add things as we think we need them.” With all that Branson has brought here, it is difficult to think of anything else that Necker Island would need.

The extreme northeast of the British Virgin Islands archipelago.

The 10-bedroom Great House and three Balinese cottages allow for a maximum occupancy of 26 people in 13 rooms. (The island typically rents

to a single party or group.) (Click image to enlarge)

Chef Steve Hitchings combines the flavors of Asia and the Caribbean in his cuisine. Ask, and he might give you the recipe for the chocolate chip cookies that are baked daily and dispensed from a tall glass jar in the Great Room.

On the stone balcony outside the Great House, convenient to the bar, snooker table, and bathroom in the Great Room, is slung the white

hammock that becomes Branson’s office during the 10 to 12 weeks he spends on Necker Island annually.