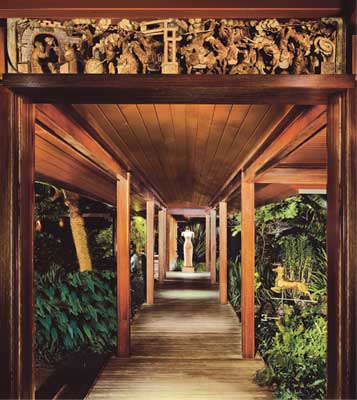 Early Fijians, perhaps while fleeing from cannibals, are believed to have jumped to their deaths from Chieftain’s Leap, a precipice some 600 feet above the Koro Sea on Wakaya Island. A few yards from the drop-off, pottery shards, rudimentary tools, and human bones mark the site of the ancient village of Korolevu. The remnants and stories of the civilization attest to the hardships of early island life, but today, at the Wakaya Club resort, all signs of inconvenience are buried well in the past.

The gentle beat of the lali, or Fijian drum, anchors daily life on this 2,200-acre island. The sound serves as a subtle reminder that lunch or dinner—dishes such as seafood paella or New Zealand lamb—is being served in the open-air restaurant. Guests come and go from traditional bungalows, called bures, located steps from the water’s edge. The units lack televisions and phones, but they are amply stocked with Fiji Bitter beer, Australian and New Zealand wines, oatmeal-ginger cookies, and, courtesy of resort owner David Gilmour, founder of the Fiji Water company, all the bottled water one can imbibe.

Set apart from the resort (but not from its privileges) is Vale O, a 12,000-square-foot villa originally built as a private home for Gilmour and his wife, Jill. The wraparound deck offers views of the whole of Wakaya and its neighboring islands to the east. A staff of six, including the Gilmours’ personal chef, attends to guests’ every whim.

Such care is the hallmark of the Wakaya Club. The staff members, many of them Fijians, orchestrate outings such as reef casting, snorkeling with parrot fish, or sunning on a private beach. The lovo, or traditional Fijian feast, is not to be missed. And when the time comes to depart, the staff is likely to bid a fond moce with a Fijian farewell song certain to draw tears.

In the Koro Sea, due east of Fiji’s main island of Viti Levu.

Nine air-conditioned bures with ocean or garden views, and Vale O (House in the Clouds), a three-bedroom, 12,000-square-foot villa with cliffside swimming pool and Jacuzzi.

The island’s nine-hole golf course offers views of Homestead Bay; a spa is slated to open in April.

as fresh mangrove crab, as well as mango and other produce harvested from the island’s organic gardens. A private chef caters to Vale O guests.

Let the staff be your guide on a predusk trek through an ancient village to the cliffs of Chieftain’s Leap.