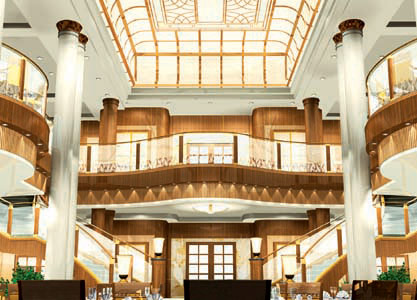 We were somewhere over the North Atlantic, halfway between New York and London, and so far our flight had been uneventful. The instruments on the bulkhead indicated an altitude of 60,000 feet and a speed of a little over Mach 2, or about 1,350 mph. We could see the curvature of the earth below; above was the darkness of space. All very pleasant.

Still, there was something unusual about British Airways Flight 2 this afternoon. It was not until we had begun our descent to Heathrow that I put my finger on it: We had been traveling three hours, and yet not one of the 100 passengers on board had put his seat back. Or perhaps this was understandable. After all, one does not sleep through the end of an era.

Some 30 years had passed since that day when a slender, delta-winged aircraft taxied into position on a remote airfield in England, while a Formula One car, its engine revving, waited on a parallel runway. The spectators covered their ears as driver and pilot throttled their engines, then, when the starter dropped his flag, accelerated to their top speeds. The racecar streaked out in front, but before the aircraft lifted off, it had captured the lead. “It had accelerated from zero to 250 miles an hour in 25 seconds,” says Mike Bannister, a British Airways captain and the general manager for Boeing, Airbus, and Concorde flight operations. “It blew the doors off the racecar.”

It hardly mattered that the aircraft would never again be called upon to drag race. The demonstration had nothing to do with practicality and everything to do with excitement, and in the early 1970s, nothing embodied excitement more than the Concorde.

When British Airways and Air France introduced their supersonic flights across the North Atlantic in April 1976, it was as though they had opened a window into the future. To be sure, the Concorde was expensive, costing 20 percent more than a first-class ticket on a standard flight, but everybody knew this would change once every airline had one. Then even more advanced aircraft would soon appear, carrying us faster and higher, and offering even more dazzling amenities. This was the space age, and there was no way to slow the march of technology.

On a more immediate level, however, the Concorde offered passengers the most valuable commodity of all: time. By cutting flight time between New York and London from seven hours to three hours and 15 minutes, the Concorde saved passengers almost a full business day on a round-trip flight. Over the course of a year, a weekly commute across the pond at Mach 2 yielded 46 extra business days or 16 full days that could be spent basking in the sun or expanding an empire, however one wished. It was a bargain Faust would have envied.

Not everyone welcomed the supersonic age. For ship owners such as Cunard, the advent of the Concorde underscored the decline of their industry. Until the 1950s, ocean liners dominated transatlantic travel to such an extent that when a Cunard executive was asked in 1954 if he was concerned about the competition posed by air travel, he responded, “Flying is but a fad. There will always be passengers to fill ships like the Queens.” That same year, 1 million passengers crossed the North Atlantic by sea and 600,000 by air. But by 1965, 4 million were flying across the ocean, while sea passengers had dwindled to 650,000. One of the Queens, staffed with a crew of 1,200, sailed with only 200 passengers.

The Queen Elizabeth 2, which Cunard launched in 1969, was the company’s first true liner since the Mauretania was introduced 30 years earlier. But however posh, the ponderous QE2 was out of step with the more youthful, less inhibited lifestyle of that era, and it was expected to be the last hurrah for ocean liners.

Against the backdrop of the times, it would have been inconceivable to suggest that within a quarter-century the age of supersonic travel would be drawing to a close, and that the latest thing in travel would be an ocean liner. However, the Concorde never lived up to expectations. Other airlines—citing the cost of fuel, operating expenses, and airport noise restrictions—failed to follow British Airways and Air France into the supersonic age.

By early 2003, a pall had settled over supersonic flight. The celebrities, titans of industry, and socialites were giving the Concorde the cold shoulder. The British and French flagships were crossing the North Atlantic with eight empty seats for every two that were occupied. In post-9/11 England, it became unseemly to fly the Concorde. Before that date, 13 of that country’s largest companies had specified the Concorde for flights over the Atlantic. Following the terrorist attacks, all 13 firms wrote the Concorde out of their travel policies.

On April 10, both airlines announced plans to retire their Concordes, with Air France hangaring its five Concordes on May 30. British Airways, with seven of the aircraft, is following suit on October 24. Once that final Concorde is towed to its hangar, there will be no turning back. With the cancellation of scheduled service, the plane’s entire support infrastructure will disappear. “Remember, this aircraft was designed in the 1960s,” says British Airways chief engineer Claud Freeman. “A lot of the original suppliers have gone out of business. It’s already like finding parts for a 1927 Rolls-Royce. With no succeeding aircraft in development, a lot of skills are disappearing, too, as engineers retire.”

Future generations of travelers, buckling themselves in for the tedious eight-hour overnight flight to Europe, may only wonder what it was like to travel at twice the speed of sound, crossing from the New World to the Old and back again the same day. Or what it was like to arrive in New York an hour before departure from London or Paris. Or why it ever had to end.

British Airways officials and engineers contend that the Concorde was profitable until an unforeseeable chain of events occurred. When an Air France Concorde crashed near Paris in 2000, what had been the world’s safest aircraft became statistically—by dint of its few numbers—its most dangerous. With that tragedy, followed by the 9/11 terrorist attacks, foot-and-mouth disease in Europe, SARS, the war in Iraq, and the downturn in the global economy, supersonic flight was bound to stall.

Others claim the Concorde was a high-flying white elephant, a noisy fuel guzzler that had little real purpose beyond national prestige—and an aircraft that was already obsolete before its maiden voyage. Bannister disagrees, pointing out that by 1967 more than a dozen other airlines had a total of 74 Concordes on order. “Then came the oil shortage of 1973, and every order was canceled. If we’d had more people flying Concordes it would have made all the difference.” Regardless of the reasons behind the Concorde’s demise, its final flight will bring us full circle. With the passing of supersonic travel, the future lies behind us. What lies ahead, with the January 2004 launch of the Queen Mary 2, is the past.

Or rather, a larger, more splendid, and far more costly interpretation of the past, for Cunard’s newest Queen is the largest ocean liner in history, an $800 million behemoth almost four football fields in length and one and a half times taller than the Statue of Liberty. “When we arrive in New York, people will swear we’re going to take out the Verrazano Narrows Bridge,” says Cunard naval architect Stephen Payne, the ship’s designer. “But we’ll have maybe 15 or 20 feet to spare.”

A computer-generated image of the QM2 sits on a bookshelf in Payne’s London office at the foot of the Tower Bridge, but he’s been carrying the vision of this ship since he was a boy. He was 12 when, in January 1972, a British children’s show aired a story on the Queen Elizabeth 2. “They said nobody would build another ship like it again.” The young naval enthusiast disagreed and set to sketching a design for a new ocean liner with unique features: a wraparound promenade, a central corridor leading through the ship, and an atrium. Thirty years later he has realized these features on the QM2. “The promenade is different from the QE2’s, whose forward end is unprotected,” says Payne. “There are usually ropes there to protect against high winds.” On the QM2, however, passengers will stroll the ship’s one-third-mile perimeter without fear of falling into the drink, thanks to a ring of windows shielding the walkways.

Payne created a central passage by providing the ship with two engine compartments instead of one, enabling him to design a corridor that runs through the ship’s core and connects all of her public rooms. As for the atrium with flowers blooming year-round, that idea was not original with him, Payne acknowledges. Rather, it dates to ships of the French Line in the 1920s. “It’s another of those ideas people forgot,” he says.

Payne expects longtime Cunard aficionados to scrutinize the ship with great interest. After all, the QM2 is not only the company’s first ocean liner in 35 years, it is also the first since the British firm—so redolent with tradition—was purchased by mass market operator Carnival Cruise Lines in 1998. “The biggest challenge,” says Payne, “lay in convincing Carnival to build a true ocean liner and not a cruise ship. A modern-day cruise ship is like a floating box. There is very little shape. Every square foot of the ship is used for revenue generation.”

By contrast, a liner is more like a pyramid, with the funnel in the center and the shape sweeping down to each end of the ship. The result is a loss of volume and potential earning capacity. The two types of vessels operate differently, as well. While a cruise ship is designed primarily for hugging the shore while sailing from port to port, an ocean liner is built to sail the high seas, using its greater speed to avoid storms. Given its more rugged construction and more powerful engines, a liner also costs about 40 percent more to build.

The investment appears to be a worthwhile one, says travel consultant Teddie Chapman, aka the Travel Goddess (www.thetravelgoddess.com). “Cunard has tapped into a broad demand for elegance among baby boomers. The people I’m booking want an experience that hearkens back to the great age of sailing.” A major selling point, she says, is that four of the transatlantic cruise’s six nights are black tie. “My customers tell me they can’t wait to make their grand entrance down that long staircase in the main dining room. I think the QM2’s going to cause a spike in the sales of taffeta ball gowns.”

Thus the Concorde era ends and the age of the QM2 begins. If there is any meaning to the apparent symmetry of the two events, it is simply that prophecies are proven wrong all the time. It may even be that in a year, or 10, or more, we will learn that these reports of the Concorde’s demise were premature. Still, any discussion that includes both the Concorde and the Queen Mary 2 does serve to underscore the notion that all time is relative. For those crossing the ocean by air, feeling their limbs become stiff while nibbling at a piece of flash-frozen and microwaved halibut, eight hours is far too long. For those making the same trip on the Queen Mary 2, playing paddle tennis in the morning, relaxing in the spa in the afternoon, then making a grand entrance into the Britannia dining room that evening, a voyage of six days will be far too short.