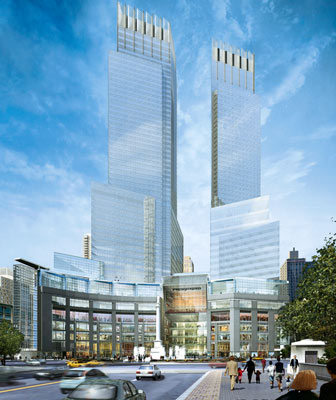 It’s All About View

There will soon be a refreshing new way to view the world’s most famous skyline. Scheduled to open in October, the Mandarin Oriental New York, located on the upper floors of the new AOL Time Warner skyrise at Columbus Circle, will include rooms with a tub at the window so that guests can take in the city vistas while enjoying a bath. Other aquatic views will be offered from the 75-foot lap pool and the 14,500-square-foot spa, both located on the 36th floor overlooking the Hudson River and Central Park. The spa promises to be an urban oasis with myriad Asian-style massages, including one designed to help ease jet lag. In addition to seven treatment rooms, the spa will include a private VIP suite—the first of its kind in the city—replete with a private bath, a sauna, and a fireplace, for approximately $400 an hour.

The hotel’s more formal areas—a ballroom with chandeliers and three walls of floor-to-ceiling windows, an adjoining lounge, and a posh French-Japanese restaurant—will show off the lights of New York City in style. And if auditory indulgences are your fancy, the new home for Jazz at Lincoln Center will be merely an elevator ride away.

Hotel amenities will include DVD/audio equipment, 24-hour butler service, and monogrammed pillow shams for returning guests. The presidential suite, priced at $12,000 a night, will have a kitchen, a dining room, a wood-paneled study, handmade Oriental rugs, and a corner view. Flat-panel plasma televisions are featured in all of the suites, and just in case the spectacular cityscape is not enough to hold your attention, smaller flatscreens will be in the bathrooms.

Berlin’s status as one of Europe’s most cosmopolitan cities will be enhanced in January 2004 with the opening of the Ritz-Carlton Berlin in the city’s newly fashionable Potsdamer Platz quarter, former site of the Berlin Wall. Guests of the hotel will be able to dine alfresco at an authentic French brasserie, which has been rebuilt piece by piece from the original structure that stood in Mâcon, France, circa 1875, or cozy up next to the fireplace in a mahogany-paneled library filled with books and photographs reflecting Berlin’s rich history.

The hotel will include 271 rooms and 31 suites, each equipped with the most up-to-date technological features, such as bedside control panels and heated bathroom floors. Some of the suites will feature an oversize marble bathroom with a sauna and a whirlpool. And in keeping with Ritz-Carlton tradition, a bath butler will be on call to draw your bath with salts, rose petals, or bubbles. Other butlers will be on hand for shoe shines or to answer questions about the hotel’s technology services. Concierge and secretarial services will also be available.

Music and art aficionados will applaud the November opening of the Le Meridien Vienna in the city’s Ringstrasse. Located across from the Viennese State Opera and other cultural institutions, the hotel is part of a 110 million–euro renovation project that is converting turn-of-the-century imperial apartments into luxury properties. Minimalist yet dramatic in its decor, the hotel will include 261 rooms and 33 suites, each equipped with a wall-mounted 42-inch plasma-screen TV. Guests will have access to a fitness facility, the area’s only full-service spa, a French brasserie, and a Viennese café.

Costa Rica should continue to gain popularity as a vacation destination with the opening of a Four Seasons in February 2004. The Four Seasons Resort Costa Rica at Peninsula Papagayo will be flanked by beaches that border a set of bays on the Pacific Ocean. All 153 rooms and suites and 20 villas in the complex will offer spectacular views from either a terrace or a treetop veranda, and many of the suites will include plunge pools. The villas, ideal for traveling families, will include a living room, a dining room that seats six, a fully equipped kitchen, either two or three bedrooms, laundry facilities, and a terrace or balcony with a plunge pool.

Arnold Palmer designed the 18-hole championship golf course, and the 16,000-square-foot spa promises “treatments inspired by the tropics” along with more traditional services such as massages. Eco-adventurers will be able to enjoy treks to nearby national parks and wildlife preserves, and sporty folk can hike, sail, surf, dive, fish, snorkel, and play tennis. Those who prefer to be as sedentary as possible on vacation can lounge on one of the resort’s two private beaches.

The resort town of Whistler, north of Vancouver in British Columbia, is one of the few places in the world where skiing can be pursued year-round. The Four Seasons Resort Whistler, opening in early 2004, will capitalize on this fact. The resort will lie at the base of Blackcomb Mountain, a quarter-mile walk from the Blackcomb ski lifts and a Whistler Mountain shuttle. The resort will also provide a ski concierge, who will tune equipment, reserve lift tickets, and arrange activities for skiers of all ages and ability levels.

Because no one spends every minute on the slopes, the resort will also feature a heated outdoor pool for dips in any season, access to three golf courses, a spa that includes a private suite among its 14 rooms, a restaurant with British Columbia vintages on its wine list, and a large wood-burning fireplace in the lounge.

Guests of the Inn of the Five Graces, which is scheduled to open formally in the spring of 2004 in Santa Fe, N.M., will not find chocolates on their pillows every night. Instead, the turndown staff will leave Native American handicrafts such as dream catchers, which are said to attract good dreams and filter out bad ones. Little touches such as this will heighten the experience of visiting the 22-suite inn. The doors will be hand-carved, the bathrooms will feature Mexican mosaic tiles, and the decorations will be drawn from a range of cultures. Pueblo and Navajo weavings, Native American and Mexican pottery, antiques of Hindu, Buddhist, or Islamic origin, and ethnic textiles such as Afghan dhurries and Turkish kilims will enliven the spaces. If you can tear yourself away from your well-appointed cocoon, you will find Santa Fe’s art galleries and fine restaurants within walking distance of the inn’s Barrio de Analco address.

Inn of the Five Graces