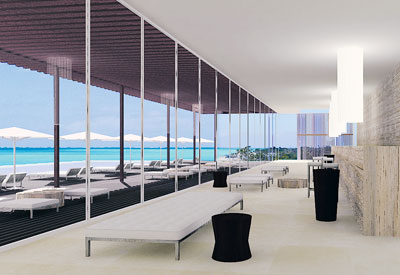 Amanresorts was among the first luxury brands to establish accommodations on Turks and Caicos, the British West Indies islands on the Bahamas’ southeast fringe. The firm’s Amanyara resort, an assemblage of lavish pavilions, soon will have as company the Ritz-Carlton Molasses Reef resort (in 2008) and the Fairmont Turks & Caicos (in 2009). But the well established are not the only entities setting up hotels on the Caribbean archipelago, as evidenced by the presence of the start-up O Property Collection.

The Vienna, Austria, company recently purchased 2.24-square-mile Dellis Cay, on which it plans to build deluxe residences and hotels. “We’re coordinating the world’s biggest luxury real estate project outside Dubai,” says the O Property Collection chairman and CEO Cem Kinay, noting that $1 billion will be the cost of the development’s completion, which is set for 2008. Homes and villas will be priced from $1.5 million to $10 million.

In 1990, Kinay left his position as a doctor at the General Hospital of Vienna to enter the real estate and hospitality realms. That same year, he and business partner Oguz Serim founded the Magic Life Group destination club. The two sold the company in 2004 and established the O Property Collection in 2005. They intend to bring the O to the Caribbean first and eventually to the Mediterranean region and Asia.

Kinay says his company plans to offer guests exceptional service in settings that display careful attention to design. Dellis Cay will feature what Kinay calls lifestyle zones—seven areas by different designers. Tokyo architect Shigeru Ban will create the South Beach zone’s residences; each will consist of a beach house and an over-water villa accessible by a floating bridge. Additional zones will include oceanfront estates and spa villas. Restaurants, boutiques, and a marina with 110 boat slips will afford ample diversions and recreation opportunities, and a Mandarin Oriental hotel will offer rooms, suites, and ownership residences.