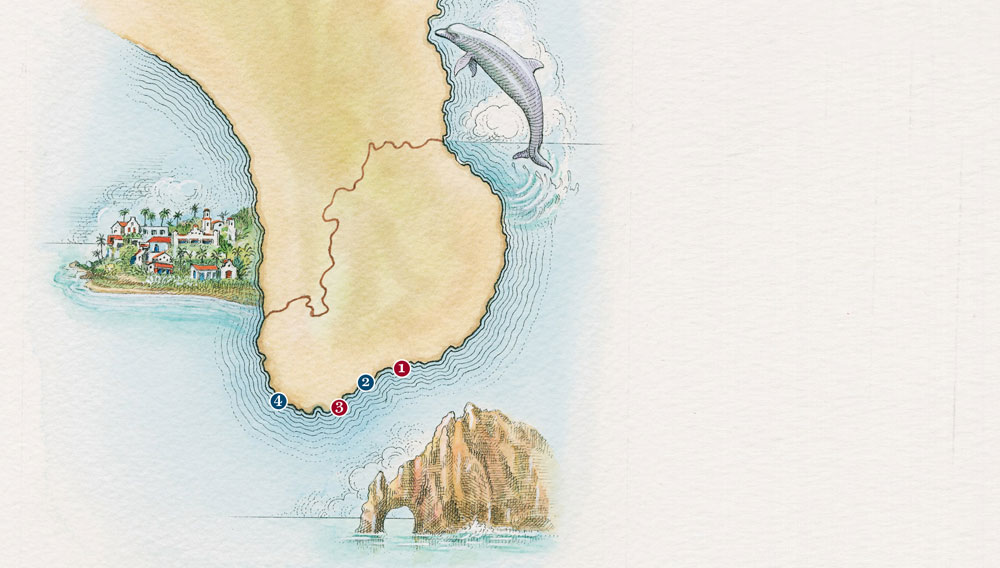 On September 14, Hurricane Odile slammed the southern tip of Baja California with 125 mph winds and torrential rains that caused an estimated $1 billion in damage. The popular Los Cabos corridor, which runs for about 20 miles from San José del Cabo in the north to Cabo San Lucas in the south, was closed to tourists for nearly a month in the storm’s aftermath, with no operative airport and few functioning hotels. The airport reopened on October 8, and the region’s resorts are gradually beginning to welcome guests again. Here we check in on the Cabo area’s four premier properties, all of which will be reopening in 2015.

The Palmilla’s location close to the water left the venerable resort more vulnerable than most, with significant damages including the loss of several of the palm trees for which it is named. An extensive repair and renovation process should be completed by early March, and the resort is currently accepting reservations from March 15. oneandonlyresorts.com

The beach in front of Las Ventanas was stripped of sand, and the interiors of the resort’s 12 extravagant new oceanfront villas were trashed. But the sand has returned to the beach, the villas and other damaged areas are currently being restored, and the hotel is expected to reopen in early 2015. rosewoodhotels.com

Esperanza suffered perhaps the worst damage among its peers, though none of it was structural. The resort has set a reopening date of March 1; the property’s residential section could be functional as soon as January 31. aubergeresorts.com

4 / The Resort at Pedregal

Known as Capella Pedregal when Odile hit, this resort just outside of Cabo San Lucas will reopen with a new name in early 2015. The hotel survived the hurricane in better shape than most, and changes to the property, aside from its moniker, should be minimal. theresortatpedregal.com