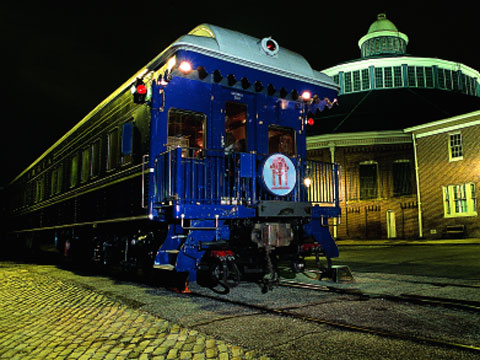 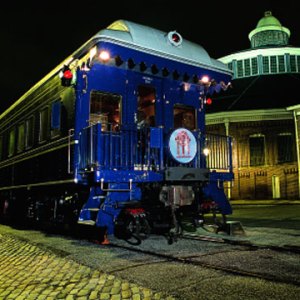 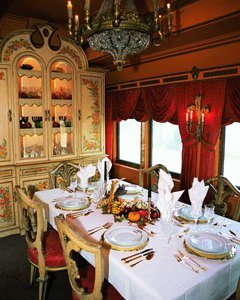 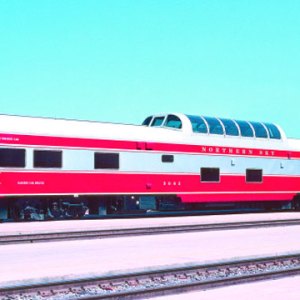 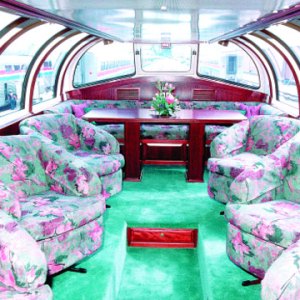 As the train rumbled north, the skyscrapers and bridges of Manhattan swiftly fell away. The steel rails unspooled beneath the car’s elegant carriage, scrolling out in parallel for miles toward the horizon. On the left, the Hudson River flowed lazily on, only feet away from the tracks, with the 500-foot cliffs of the New Jersey Palisades looming on the far shore. The train picked up speed, rushing past children playing in ball fields, past boats bobbing at anchor, past stations bearing names like Marble Hill and Spuyten Duyvil, where passengers awaiting Metro-North trains looked up from their newspapers and lattes to smile and wave at streamlined history roaring by in the shape of speeding iron and glass and varnished wood.

From the open, brass-railed platform of the New York Central 3, a 1928 Pullman business car, the present retreated with the haze and spires of the city, giving way to long-vanished decades that seemed to draw closer with the shifting landscape. The occasion was an appropriate one for nostalgia: The NYC 3 brought up the rear of Amtrak’s Lake Shore Limited to Chicago, joining the car in front of it—a 1926 Pullman observation car, the Ohio River—to mark the 100th anniversary of America’s most celebrated train, the 20th Century Limited. From 1902 to 1967, the 20th Century ran from New York to Chicago, up the Hudson River and then west along the shore of Lake Erie on “the water level route—so you can sleep,” as its slogan proclaimed. Flagship of the New York Central Railroad, the 20th Century’s posh appointments and professional staff were second to none (despite the claims of its arch rival, the Pennsylvania Railroad’s Broadway Limited). Even the train’s engines were special; the 1938 Century’s Hudson J-3a steam locomotive, streamlined by the great designer Henry Dreyfus, incorporated a steel shroud for aerodynamics, which proved a public relations bonanza for the railroad and was used in all of its advertising.

That the NYC 3 should follow the 20th Century’s route was fitting. The Pullman Co. built the car for Harold Stirling Vanderbilt—a three-time America’s Cup winner, the creator of modern contract bridge (NYC 3 owner Lovett Smith claims this cultural milestone was actually reached on the car itself), and the last of the Vanderbilt clan to run the New York Central Railroad. The line’s heyday coincided with that of private rail travel, spanning the period from the 1870s to the 1930s. Then, “merchant princes” such as Harold’s great-grandfather, Cornelius “Commodore” Vanderbilt, J.P. Morgan, and Andrew Carnegie traversed the nation aboard plush private cars that outclassed New York’s finest hotel rooms. This Golden Age began to wane by the 1940s, its passenger cars used during World War II for soldier transport. Yet the history and romance of the old railroads still holds its appeal for a small but avid group of travelers—owners and charterers of private railcars, many of which have colorful pedigrees. The Survivor, for instance, a private car once owned by F.W. Woolworth’s daughter Jesse (and later used by her niece, Barbara Hutton, reputedly during her courtship with Cary Grant), now serves as the Atlanta home of its new owner, Dante Stephensen. E.F. Hutton and his wife, cereal heiress Marjorie Merriweather Post, shared a private car until their 1937 divorce; the mahogany-paneled Chapel Hill, which sleeps eight, is still rolling today and available for charter.

“It’s one of the greatest secrets in America that the public can actually charter a private railroad car and take it anywhere in America that Amtrak runs,” says Patrick Henry, public relations representative for the American Association of Private Railroad Car Owners (AAPRCO, www.aaprco.com). According to Henry, there are between 30 and 40 private railcars in service that satisfy Amtrak standards for travel. Among other requirements, the cars must be rated for speeds up to 110 mph.

Proprietor of a Houston public relations company, Henry does not own a car, but frequently books them for his business. “Our business literally tripled since I started using private railcars for entertaining clients,” he says. Last year, he teamed with clients and chartered 10 private cars to travel from Chicago to New Orleans for the Super Bowl. “Everyone started out pretty formal,” he says, “but by the time we reached New Orleans the next day, we were all fast friends.”

Henry is not alone in using private railcars—or “private varnish” (PV), as they are sometimes called because of the glossy painted exteriors of the older cars—for business purposes. “We had one employer who used to take his entire staff to Reno each Christmas [on the Virginia City],” says Julia Pellizzer, who, with her husband, Wade, owns and operates their 1928 Pullman business car out of Redwood City, Calif.

Clients, of course, have hired cars for purposes other than business, including family reunions, special anniversaries and birthdays, gourmet trips, or as rolling hotels for big events such as New Year’s Eve in New York City. For many, the experience harks back to a more relaxed time, when travelers enjoyed fresh views of America from ground level, rather than from 35,000 feet.

“It’s the nostalgia, [yet it’s also a] new and different experience,” says DeWitt Chapple Jr., Ohio-based owner of the 1922 business car Chapel Hill. “Very few do it to get from point A to point B.”

Choosing points A and B is a distinctive pleasure of private railcar charter. You can opt for a planned journey, or you can design your own trip, deciding where you want to go—virtually anywhere that Amtrak and VIA Rail Canada reach.

The appropriate period and style of railcar will depend on the number of passengers and the terrain. The 1920s-era business cars, constructed mainly for railroad executives, offer a certain intimacy and charm, but have a limited capacity. If you are traveling with a larger group, a streamlined post–World War II sleeper or sleeper-lounge car might better suit your needs. If scenery is key, consider a post–World War II dome car, with 360-degree views—keeping in mind that clearance limits restrict such cars from entering some cities.

The average cost of chartering a car usually starts at $4,000 per day and up, depending upon distance traveled, number of days, number of switches to different trains, number of onboard staff (usually a chef and a steward), choice of food and beverage, and so on. Amtrak charges per-mile fees (usually $1.15 per mile), switching fees (generally a few hundred dollars), parking fees and more, all of which are passed on.

The cost of purchasing a used PV begins at about $200,000, but prices often climb much higher, depending on the condition of the car; significant renovations can add hundreds of thousands to the final tab. Maintenance costs range from $30,000 to $50,000 per year. As Chapple notes, owning a PV “is something that you have to be intensely interested in—in love with—or you have to have very deep pockets.”

When asked for tips on arranging a successful private rail trip, owners agree on one in particular: the more time allowed for planning, the better. Reserving trains and connections around the country can take months to coordinate with Amtrak. Flexibility on dates is also important; a connection a day earlier or later may help the owner save the client money. Also, keeping a sense of humor helps. Trains, like airlines, are subject to occasional delays.

Pellizzer offers another caveat. “A lot of times, people come on to take the trip of a lifetime, and find out it’s not enough,” she says with a laugh. About 80 percent of her customers are return business. “I should put a disclaimer on my paperwork saying, ‘Warning: Private rail travel can be highly addictive.’ ”

It was a hot June day in Bethel, Conn., when Lovett Smith III sat next to his 1928 Pullman business car, the New York Central 3, cutting away at a stubborn bolt. Attached to a brass wall lamp, the bolt’s length prevented the lamp from mounting flush with the wall. During the previous week, Smith and other workers had removed all the windows, scoured away any rust, repainted the exterior in original 1928 Pullman green, put a new covering on the roof, replaced the windows, and replaced the interior wall lamps with the heavier brass fixtures. This one was the last. “The lighter ones rattled too much,” he says. For Smith and many other car owners, no detail is too large or too small. Since he bought the four-bedroom car in 1992, the former Union Carbide executive has logged 102 trips and 175,000 charter miles. Like many car owners, Smith grew up in a railroad family. His father was an executive in Oregon for the Southern Pacific, and Smith caught the bug early. “From the time I was 15, [buying a railcar] was on the agenda,” he says. Contact Smith through his web site, www.nyc-3.com, or phone 203.775.9433.

Virginia City co-owner Julia Pellizzer cannot claim she didn’t know what she was getting into when she married her husband, Wade. The Redwood City, Calif., couple were married in 1989 with 50 guests in attendance on the Virginia City, attached to a train rumbling to Reno. Wade had bought the car five years earlier with a partner, whom he and his wife later bought out. They then set to work restoring the Venetian Renaissance Baroque interior of its previous owners. “Once you walk in, your jaw drops,” says Julia. “There are things you’d never expect on a railroad car.” Contact the Pellizzers at 650.369.5405, or check out their web site at www.vcrail.com.