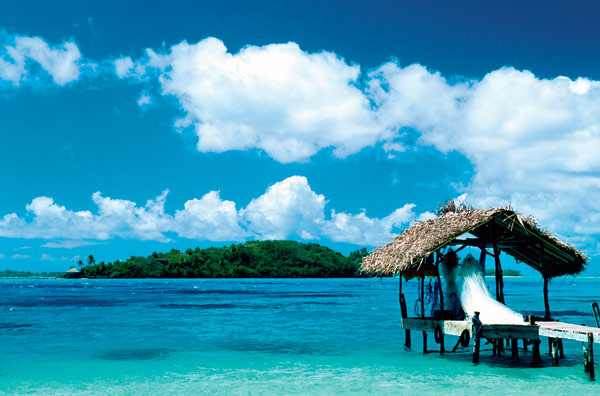 This was not going to be just any vacation for this family of 10 from California. Wanting to enjoy an experience unlike any they had ever known, the group, which ranged in age from 25 to 65, decided that together they would see the world, or as much of it as possible, in a span of 30 days. They could not have hoped for more than what they received.

When their monthlong journey concluded, they had visited four continents and eight different destinations. Abercrombie & Kent, a 41-year-old travel company based in Oak Brook, Ill., created an itinerary that took the family to Bora Bora, Australia, Vietnam, Botswana, Brazil, Peru, the Galápagos, and the Maldives. They traveled aboard a variety of aircraft, including a Cessna Citation II, a fanjet prized for its ability to run quietly and take off from short airstrips. “Our offices came up with different itineraries in each place, depending on what each person wanted to do,” says Pamela Lassers, Abercrombie & Kent’s director of media relations. The company selected a Cessna Citation II to ferry the group from one destination to another because of its versatility. “It can fly into smaller airports than most business jets can,” she explains. “In the case of the Maldives, having a private jet is a plus because it is so hard to reach.”

Abercrombie & Kent is among a handful of travel companies that offer scheduled trips to the world’s most exotic locations while also designing custom jet-based journeys on demand. Drawing on their experience and resources, these companies can create complicated, multistop trips to far-flung places, and some can even supply expert guest lecturers, tour leaders, and local guides. Generally speaking, anything that is offered through a scheduled trip can be had on a private trip.

Seattle-based TCS Expeditions, for example, designed an 18-day turn-of-the-millennium tour of Asia for a family group of 37 that ranged in age from 3 to 65. The vacation included stops in India, Nepal, Cambodia, and Thailand. Along with scheduling all of the flights (which included arranging multiple departures to India from various locations throughout the United States), TCS provided two tour directors who traveled with the group throughout the trip, and it planned sight-seeing excursions that were customized for the different age groups in the party. The company also supplied a wealth of amenities—including stationery kits, printed itineraries, and backpacks—that were branded with a personalized trip logo. In addition to all of this, TCS arranged a traditional Christmas turkey dinner in India and a New Year’s Eve celebration at the temple of Angkor Wat in Cambodia. During the course of the trip, several different aircraft, most notably a Boeing 737, transported the family members. “Trips like these require expert handling by knowledgeable people who will devote personal attention to every detail,” says Linda Wischmeyer, president of TCS. “[These trips] are extremely labor intensive because they are totally customized, and passengers tend to make numerous changes throughout.”

Some individual travel consultants are also building reputations for their ability to design custom private jet vacations. Sue Brown of Sue Brown Travel Consultants in Boca Raton, Fla., has more than 30 years of experience in the travel industry and has been arranging private jet charters for the past 10 years. “It’s exactly like picking a resort for a client,” she says of advising people on choosing a charter plane. “They have a comfort level that must be satisfied.” An increasing number of Brown’s clients have experience with private flight, either through outright ownership or fractional jet shares, and come to her with knowledge of the aircraft that are available. “Everyone loves the Citations and the Hawker 800s,” she says. “They’re comfortable aircraft with good range.” While she does not offer charters aboard Boeing Business Jets, she can arrange for Gulfstream V flights.

A skilled consultant stands ready to smooth out any wrinkles in a travel plan, and Brown is as adept at applying these skills to the flight experience as she is with earthbound arrangements. She always scrutinizes the interior layout of the jet and tweaks it accordingly. Brown once had the backseats removed from an aircraft to accommodate the two German shepherds that a client planned to bring on his trip. Catering is also crucial. “You have to know who you’re working with. Most upscale clients are very specific [about food],” she says, adding that it is essential to please the differing palates in the party. “The parents might want super gourmet,” she says, “but the kids better have their PBJ and milk and cookies.” Brown’s services extend to the selection of the plane’s staff: She can, and has, supplied specific flight crews requested by return clients. Most purveyors of custom jet vacations begin as high-end travel specialists and consequently develop expertise with private flight.

Private Jetaway took the opposite route, growing from an aviation charter company into a boutique travel business. “We did it for fun, to appease the clients of Air Royale, but it grew on its own,” says Wayne Rizzi, president of both of the Los Angeles companies. Air Royale International, which he founded in 1994, offers charters aboard privately owned aircraft (including Learjets, Gulfstreams, and Boeings) that pass its strict screening process. Rizzi noticed that an increasing number of his charter clients were inquiring whether his company could provide vacation services beyond aircraft charters—villa rentals and yacht charters, for instance. He routinely told them no, until one day in 1997 when he decided to say yes, and thus Private Jetaway was born.

While Rizzi’s clients knew they wanted luxurious, jet-based vacations, many needed help articulating the details. Realizing that he had created what he refers to as “a restaurant with no menu,” Rizzi set out to design a number of turnkey Private Jetaway options. He spent three years researching and designing his plans, liberally picking the brains of his charter clients and developing the travel infrastructure needed to fulfill the wishes and whims that seemed likely to arise. Yacht charters and villa rentals became primary components of Private Jetaway, and it adopted the Air Royale approach of enlisting only those vessels and properties that passed the white glove test.

Once he had established a core menu, Rizzi began promoting Private Jetaway and its offerings. The itinerary of a recent Las Vegas trip for four included limousine transfers, in-flight champagne and caviar, and accommodations in a two- bedroom penthouse suite at the Bellagio. The turnkey portfolio continues to grow and now includes safaris and skiing holidays.

Private Jetaway demonstrated its expertise with custom vacations by arranging a trip from Los Angeles to Necker Island, Richard Branson’s exclusive resort in the Caribbean. The clients, a family group of 26 ranging in age from 7 to 65, flew on a DC-9 that had been reconfigured from a standard commercial jet layout to an all-first-class, 42-seat layout with a bar/lounge area. Because Necker Island has no airport, the company arranged for the plane to land on a nearby island, where the resort’s yacht met the party. Rizzi recalls that the group had one idiosyncratic request for their flight: The adults wanted chocolate martinis. Because the customer is always right, the company fulfilled the request.

Rizzi also remembers a particular couple who frequently traveled with two small lapdogs. When they requested no catering service for themselves, the Private Jetaway representatives asked, “What about the dogs?”

Two years ago, a group of 12 golfers from Nashville, Tenn., played the Harbour Town Golf Links in Hilton Head, S.C.; Whistling Straits in Koehler, Wis.; and Shadow Creek in Las Vegas, where they also spent some time gambling. They did all of this in three days. Jet-Golf (888.946.4733, www.jetgolf.com), a golf travel company with offices in Kalamazoo, Mich., and Atlanta, arranged the tee times at each course and provided a Gulfstream V to fly the party, a group of friends who worked at the same company, across the country. “They got back in time for their company’s conference in Tennessee,” says Tim Ummel, principal of Jet-Golf.

Private jets are renowned for saving travelers time and helping them avoid airport inconveniences. Couple these benefits with travel companies that provide access to the world’s best courses while tending to details such as luggage wrangling, customs clearing, and hotel check-in, and you have an unbeatable combination. Jet-Golf is one such travel company. Wide World of Golf (831.626.2400, www.wideworldofgolf.com) and PerryGolf (770.641.9696, www.perrygolf.com) are two others.

Wide World of Golf strives to live up to its name, offering trips to courses in Africa, Australia, and New Zealand, as well as North America, Europe, and the United Kingdom. Clients travel aboard Falcon 900s, Challengers, and late-model Gulfstreams, and occasionally there is call for a Boeing Business Jet. “I’ve had days when I’ve slept in Scotland, played in Ireland, and flown back [to the United States],” says company president Bill Hogan.

PerryGolf’s private jet business focuses on golf’s sacred grounds in the United Kingdom.The company flies golfers to the destination country on a jet and often uses helicopters, such as Twin Squirrels and Eurocopters, to transport them to the courses. “The nice thing with helicopters,” says Gordon Dalgleish, PerryGolf’s cofounder and codirector, “is [that] you can land beside the first tee.”

Off the Beaten Tracks

Bushtracks Expeditions (650.326.8689, www.bushtracks.com) offers a different take on the custom private jet vacation. The company, which is based in Menlo Park, Calif., concentrates on a few specific areas of the world, most notably Africa, providing its clients with experienced guides and superior accommodations. Bushtracks can design custom air routes that fly over Africa’s most magnificent landscapes and supply expert bush pilots who are familiar with the different regions.

“One of the benefits of going on a private aircraft is flying over the wildebeest migration,” says company vice president Carolyn Hall Tett. “You get a feel for its expansiveness in the air that you can’t appreciate on the ground.” The same sentiment applies to flying over Ngorogoro Crater in Tanzania and Victoria Falls in Zimbabwe. “We always do a double loop over [Victoria Falls] so everyone on both sides of the plane can take it in and take pictures,” says Tett.