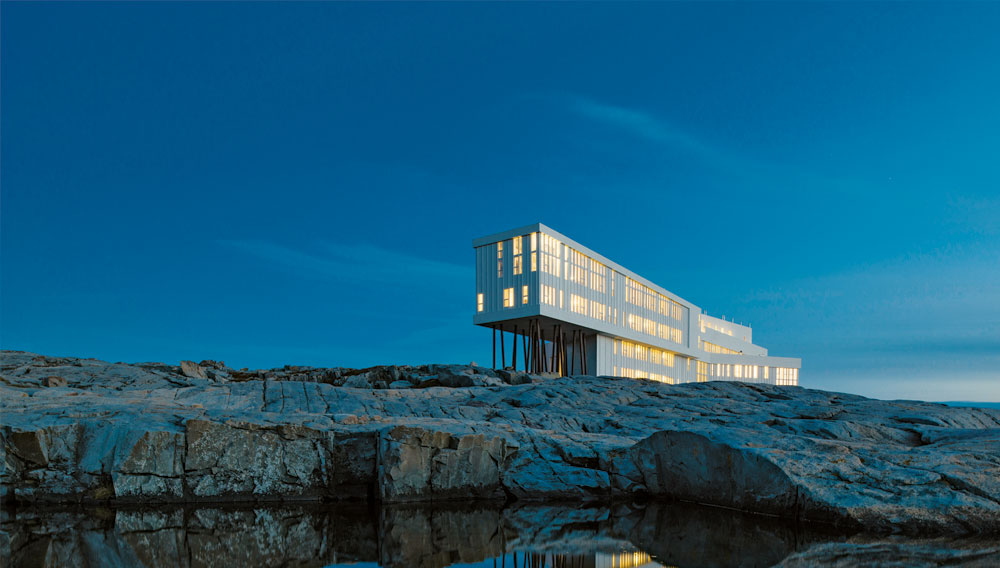 Sandy Cove is silent as I glide toward the sapphire-streaked icebergs in the distance. Slowly traveling south from Greenland, the behemoth blocks of ice glisten in the warm New­foundland sun, beckoning me to some imaginary finish line. I dip my wooden paddles down and pull, propelling the wooden punt across the surface with a powerful heave that for a moment disrupts the tranquility of the slow-moving scenery.

“Remember to use your body—not just your arms,” says Al Dwyer, a punting instructor on nearby Fogo Island. An avid kayaker, I am unaccustomed to the punt’s wide berth and double paddles, but I soon find the rhythm I need to keep apace with my leader. “You’re good,” Dwyer observes. “If I don’t have a partner for the race next year, you’re hired.”

Punting is a time-honored tradition on Fogo Island, a 92-square-mile island located off the northern coast of Canada’s Newfoundland and Labrador province. For centuries, the handmade wooden boats—which are large enough to battle the northern Atlantic currents yet small enough to be navigated by one or two rowers—served as workhorses in the region’s cod-fishing industry. Today, the punting tradition is alive and well, with artisans continuing to craft punts from local timber in the same manner as their ancestors. More than a pastime, punting has also become a spectator sport, with an annual 10-mile race stretching from the island’s Government Wharf in Joe Batt’s Arm harbor to Fogo Head Rock and back.

Last April, the Fogo Island Inn—a striking 29-room property that opened in 2013 in Joe Batt’s Arm—debuted the Little Boats of Fogo Island package to introduce guests to the art and sport of this enduring custom. Available year-round, the two-night package (priced from $2,990 for two people) includes a punt-building workshop in which guests can learn to carve the gangboards, bind the strakes, or shape the gunwale of the wooden boats. A lesson in punting follows, with participants learning to paddle and steer in deep water with an experienced punter such as Dwyer, who has completed the annual Fogo Island race four times.

Following a day at sea, guests return to Fogo Island Inn for cocktails splashed over glacier ice and dinners of grilled cod and Prince Edward Island beef. The modernist property’s interiors feature many a tribute to the punt, from the custom wallpaper depicting sketches of fishing stages and wooden boats to the bespoke spruce furnishings produced by local punt craftsmen. The inn also honors the tradition at its 37-seat theater, where regular screenings of Cranky—a documentary about Fogo Island’s annual race—offer inspiration for prospective punters.