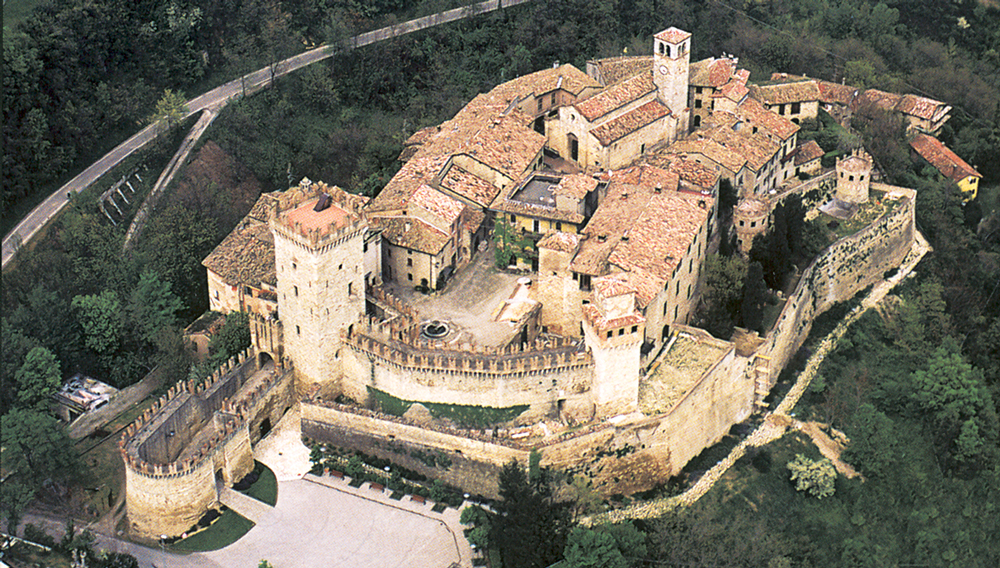 Italy’s storied Motor Valley is best understood from the seat of a vintage roadster.

Any moment now we will fire up our engines and go tootling out of the medieval courtyard of Castello di Vigoleno in Northern Italy and down the road toward Modena. But first, a few words of advice from the locals: Don’t forget, they warn, that the cars we will be driving —a 1962 Alfa Romeo Giulietta roadster and a 1972 Fiat 124 Spider—are vintage machines. Keep the revs up to avoid stalling and watch out for tractors and trucks loaded with farm produce on the back roads and in the villages. But otherwise, “don’t worry about the speed limits—you can drive 30 kilometers per hour over the posted speed limit without getting a ticket,” says Luigi Orlandini of Canossa Events, which provided the wheels for the trip, as he hands me the keys to the Fiat. “This is Italy.”

More precisely, it is Emilia-Romagna, a 13,950-square-mile pastoral swath between the Po River to the north and the Apennine Mountains to the south, a region better known to some as the Motor Valley. Less trodden by the tourist masses than Rome, Tuscany, or Venice, the region is irresistible for aficionados of high-priced, exotic cars. This is, after all, the birthplace of the automotive visionary Enzo Ferrari and home to factories building Ferraris, Lamborghinis, Maseratis, and the $3 million Pagani supercar—not to mention more than a score of car museums, the Ducati Museum, and the National Motorcycle Museum. As befits Il Commendatore, as Signor Ferrari was widely known, there are not one but two museums dedicated to the man and the machine; one, in Maranello, exhibits some 40 different models of Ferrari, while a second, the Museo Enzo Ferrari in Modena, celebrates the legendary carmaker’s life.

“Since the days of the Roman chariots, the world’s finest vehicles have come from Emilia-Romagna,” our guide, Marco Montemaggi, boasts. “And the world’s most exciting automobile races have taken place on our roads.”

The Mille Miglia is the most famous of the Italian road races. First run in 1927, it was subsequently limned in Federico Fellini’s 1973 classic, Amarcord. Originally, much of the race’s excitement was provided by the spectators, an estimated 5 million of whom would crowd the roads each year for a better view of the passing racecars. Drivers learned to keep going without letting up on the gas, leaving it to the fans to leap out of the way. Consequently the race was marked by frequent fatalities and in 1957 it was canceled, only to resume 20 years later as a rally for cars of pre-1957 vintage with motoring luminaries such as Stirling Moss, Phil Hill, and Jay Leno behind the wheels.

Our itinerary would lead us along a portion of the Mille Miglia, through Parma, Reggio Emilia, Modena, and Rimini. The Alfa and Fiat are just two of the cars in the Canossa fleet; the company maintains a stable of about 30 vintage vehicles, including Jaguars, Porsches, Ferraris, and Triumphs. In addition to providing cars for rallies such as the Terre di Canossa—the company’s 373-mile sojourn through Emilia-Romagna, Liguria, and Tuscany—Canossa rents vehicles for its Gran Turismo Italiano tours such as ours, for private clients.

Our plan called for driving at a leisurely pace, taking in the scenery, and visiting the area’s famous producers of prosciutto, Parmesan cheese, balsamic vinegar, and wine. And of course, we would also be exploring the Italian passion for motoring. Three years earlier, I spent a week in Tuscany behind the wheel of a new Lamborghini Gallardo Spyder. The sight of the low-slung, $200,000 exotic cruising along at less than breakneck speed seemed an affront to the national pride. “Piu veloce! Piu veloce!”—Faster! Faster!— some drivers would yell, as they pulled up next to me. This time, perhaps suspecting I was already driving about as fast as the car would go, the grown-ups waved and small boys cheered as our little procession rolled by.

My bright red Fiat Spider was in virtually mint condition. Wheeling it around the castle grounds, the feel of the short-throw, 5-speed gearbox and the 128 hp power plant took me back to the days when I first discovered the joys of double clutching into the chicanes of the Philadelphia suburbs. Back then, as an up-and-coming airline executive, I was tempted by a nearly identical Fiat convertible—but opted for a more level-headed coupe. I always wondered, what if I’d chosen the convertible? What adventures might have awaited me on the long road? Perhaps this was my chance to find out.

Here, the road twisted and turned lazily on the way to Piacenza and then Rivalta—just the kind of driving the little roadsters were made for. Indeed, our way was not measured so much in miles or minutes but rather by the sensations we encountered as we went—the sepia wash of the small villages, the barnyard smell of farms, the smiles from the shopgirls as we motored slowly through tiny medieval hamlets.

For epicures, Modena evokes the glories of the Italian table and is the source for some of the finest balsamic vinegar, prosciutto, Parmigiano-Reggiano, and more. But for us, Modena is also about the sleek, sensuous cars built by Enzo Ferrari, who was born here in 1898 and who is commemorated in the vast, eponymous museum on the edge of town. Clad in canary yellow, Modena’s signature color, the museum designed by Czech architect Jan Kaplický billows over an interior studded with plinths offering up Ferraris and Maseratis like sacred relics. The museum also commemorates Ferrari’s townsman, the tenor Luciano Pavarotti, born here in 1935, who is represented with the winged Ferrari F40 supercar that the heavyweight opera star once owned and which invariably prompts the question, “How on earth did he get into the car?”

For a closer look at Ferrari culture, we drove over to the marque’s assembly plant in Maranello, some 11 miles away. It was not hard to spot the factory: The wall facing the parking lot is painted with bright pictures of Ferraris of all sorts, giving the exterior the look of a race-going carousel. Once inside, the first thing to catch our attention was the display of sinuous sculpted sheet metal suspended at eye level. As we entered, a siren sounded and the floor began sliding by, carrying these embryonic supercars to the next assembly point. As inspiration, the factory floor is decorated with fully assembled Ferraris—here a 550 Maranello, over there an F50, and there a 575 M. If spirits are really lagging, a worker might wander over to the plant’s collection of Formula 1 racecars. “They’re sold two years after they’re retired from competition but their owners are required to keep them here in Maranello,” a factory guide explained.

For the owner, the fun comes when he stops by to visit his car and takes it out for a lap on the Maranello track. Factory visitors without a Ferrari of their own can experience the thrill—without the risk of a high-speed fender bender—via Formula 1 simulators where a 7-minute race costs about $30, helmet optional.

The stereotype of the manic Italian driver to the contrary, traffic in the towns and villages had behaved in a most civilized manner as our pair of vintage roadsters rolled by on the way to Reggio Emilia. Here, not Maranello, may be where the world’s most imitated wheels come from—wheels made not of metal and rubber, but cheese. “Our cheeses are made only from grass-fed milk, and the only additive allowed is salt, which the cheese absorbs while being submerged for 20 days in brine tanks,” says Paolo Zoboli, a master cheese maker, as he hefts an 85-pound wheel onto the table. “True Parmigiano-Reggiano cheese has a sharp, complex, fruity, nutty taste with a strong, savory flavor and a slightly gritty texture. Inferior versions can impart a bitter taste.”

Some cheese makers, he says, try to fool you: “They will give their products names that sound like Parmigiano, but the only way to be sure you are getting the real thing is by checking the outside of the wheel.”

Who could have known? By this time it seemed we were encountering revelations at every turn in the road. In Parma we discovered a rare species of black pig once thought to be extinct. Now, nourished on acorns and chestnuts and truffles, it provides the world’s most delectable hams. In Reggio Emilia we learned that Emilia and Romagna were separate regions first unified in 1946. Today, our guides told us, to learn which region you are in, knock on any door and ask for a drink: If you are given water you are in Emilia. If it is wine, it is Romagna.

In the tiny hillside village of Brisighella we discovered a medieval district whose second-story occupants were once served by donkeys climbing the stairs. In Bologna, the regional capital, we found the site of the oldest university in the Western world, founded in 1088. In the 13th century the city also boasted no fewer than 180 stone towers, some more than 300 feet high. It is usually suggested that the towers were built by wealthy families for defense, though today we wondered if it would have been hard to see advancing armies, with so many towers in the way. In Rimini, we explored the Via Aemilia, the road built by the Roman consul Marcus Aemilius Lepidus in 187 BC.

Our odyssey came to an end at the Grand Hotel Rimini, a property redolent of bygone eras and a clientele that included auteur Federico Fellini. Looking over the verdant grounds and sipping a glass of the local Sangiovese, it was easy to regret not acquiring the spider back when I might have lived up to its sporty promise. On the other hand, if I had the spider back then, I might not have had it now.