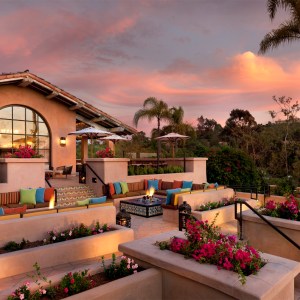 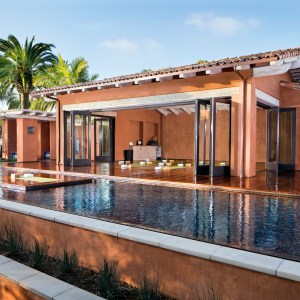 SAN DIEGO, CA (January 22, 2014) – Rancho Valencia Resort & Spa, the 45-acre luxury resort in prestigious Rancho Santa Fe, has been named a Forbes Travel Guide Star Award winner. Evaluated among 500 hotels and resorts, the recently renovated property and only Relais & Chateaux resort in Southern California, was hand-selected for excelling within the luxury travel market with its exquisite service and amenities by the esteemed organization.

“Our Star Ratings recognize the finest hotels, restaurants and spas in the world. These ratings serve as guideposts for consumers seeking exceptional travel experiences, and our primary mission is to serve the consumer,” said Michael Cascone, President of Forbes Travel Guide. “We’re proud to be associated with the new additions to our global list.”

In late 2011, Rancho Valencia closed its doors to undergo a massive $30 million property-wide renovation which comprised major updates including two new restaurants and a bar, Veladora and The Pony Room, an expanded fitness center, addition of the Serenity Yoga Pavilion, wine room, and a complete re-design of the 49 guest casitas and private three-bedroom Hacienda. Also included in the revitalization was the introduction of a brand new spa treatment menu and an enhanced range of more than 50 fitness classes offered per week.

“Rancho Valencia Resort & Spa is pleased to be recognized with this great honor, being named as one of the best hotels, spa and restaurants around the world from such a celebrated source,” says Jeff Jacobs, co-owner of Rancho Valencia along with his brothers Hal, Gary and Paul Jacobs.  “This recognition illustrates our team’s strong dedication to continually offering the finest luxury experience to our guests.”

In addition to achieving the Forbes Travel Guide Star Award, since the reopening, over the past year, Rancho Valencia has garnered several additional awards as a result of the renovation and its enhanced amenities and superior service level. A sampling of accolades earned in 2013/2014 include:

For a detailed explanation of how Forbes Travel Guide compiles its Star Ratings, visit www.forbestravelguide.com/about/ratings. To celebrate this award, Rancho Valencia is offering the “5 Star Classic” package February 1 to February 28. Guests will receive a $100 resort credit per stay. Rates start at $420 per night.

About Rancho Valencia: In October 2012, Rancho Valencia Resort & Spa reopened to guests after a 10-month, $30 million property-wide renovation. Since 1989, the award-winning Rancho Valencia Resort & Spa—Southern California’s only Relais & Châteaux property—has garnered a reputation as one of Southern California’s most sought after luxury resorts. Spanning 45 lush acres of gardens, trails, olive groves, casitas and more, this Mediterranean inspired, all-suite property offers the finest accommodations, service and programming that San Diego has to offer. Among the property’s offerings are 49 luxuriously appointed guest casitas with private patios, a three-bedroom Hacienda with a private pool and backyard, a world-class spa, fine dining restaurant and award-winning tennis program, as well as 12 residential villas.  For more information, please visit www.ranchovalencia.com or call (800) 548-3664.