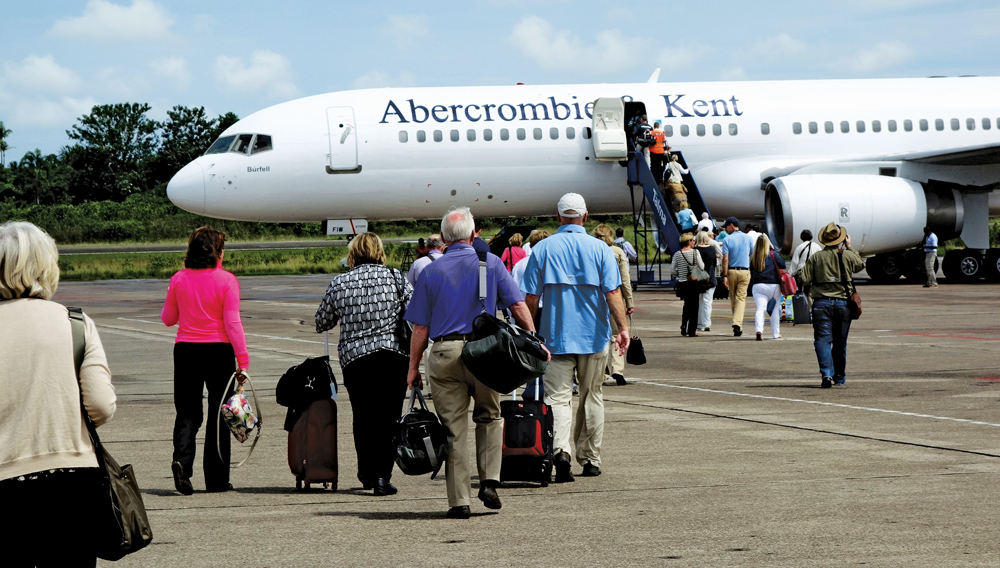 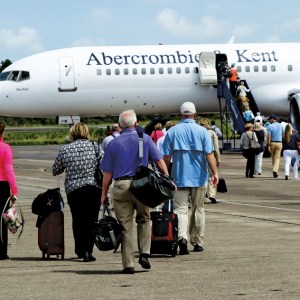 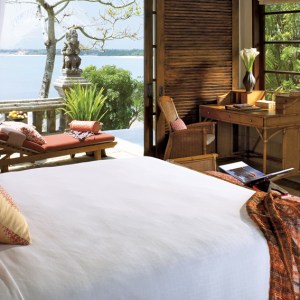 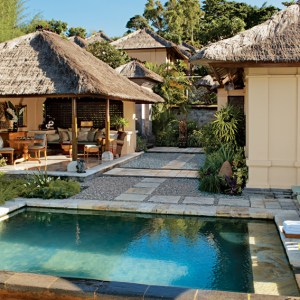 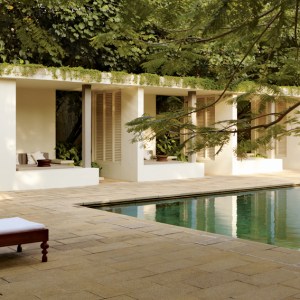 Abercrombie & Kent’s global journey touches down to one surprise after another.

In a lean-to standing just feet from the banks of the Karawari River in the Papua New Guinea jungle, a woman lay on her back on a platform, with her young niece face down on top of her and their extended family crowded around. The older woman made soothing, cooing noises as a shaman holding a double-edged razor crouched over the girl. Working swiftly, he used the blade to outline a pig in the middle of her back, and on each side he made incisions in the shape of a ladder. Blood oozed from the shallow wounds and streamed down the girl’s back. The wounds would soon heal, leaving scars on her sides resembling the paving-stone pattern of a crocodile’s hide and marking her as a woman of the river.

Along one side of the platform, a group of U.S. travelers stood ashen-faced; they were close enough to read the Gillette logo on the man’s blade. When the shaman had finished, members of the girl’s immediate family lined up so that he could cut shallow half-moon incisions on their upper arms. “I would have thought that we were intruding,” said one of the travelers, who received the surprise invitation to witness the ceremony while aboard a jet boat en route to another village. “But they treated us like guests of honor.”

The scarification is a rite of passage for members of this community, which had remained uncontacted by the outside world until 50 years ago. For the U.S. guests, it was the unsettling highlight of day 12 of the 2014 edition of Abercrombie & Kent’s 26-day excursion called Around the World with Geoffrey Kent by Private Jet. The experience of witnessing an ancient initiation ceremony only hours after disembarking from a custom Boeing 757-200ER was shaping up as a defining moment of the trip.

On day 13, the travelers were back in the Boeing, leaving behind the bugs, fetid heat, and rustic lodges of the Papua New Guinea jungle. The jet whisked them to Bali, where they quickly passed through customs before a police motorcycle escort led their coaches through bumper-to-oxcart traffic. They were headed to the Four Seasons Resort Bali at Jimbaran Bay and its king-size canopy beds, frosty air-conditioning, broadband Wi-Fi, and private plunge pools. The ride to the hotel was fast, but it provided enough time to click phones on and check the Dow Jones and the World Series scores.

Skipping airport lines and scooting through traffic are typical of the planning that makes it possible for a group of four dozen travelers to speed-date the globe. From Miami, the A&K jet hopscotched to nine thrilling destinations—the Peruvian Amazon, Easter Island, Samoa, Papua New Guinea, Bali, Sri Lanka, Madagascar, Kenya, and finally Geoffrey Kent’s home in Monaco—before returning to New York. Each visit lasted at least 48 hours. Travel aboard the A&K jet is supremely comfortable: Passengers enjoy broad seats that recline flat for snoozing, a movie-packed iPad at each seat, and a larder of snacks, drinks, and hot meals. On the flight from Papua New Guinea to Bali, the cheerful, attentive Icelandic crew served tea, cucumber sandwiches, and little squares of cake.

A&K will largely reprise last year’s itinerary for its 2015 Around the World journey, which has already sold out. But places are still available in a similar 50-guest experience called Wonders of the World by Private Jet, which is priced from $108,000. This trip will take place over 24 days in September and will also be accompanied by Kent. It will head from Miami to Peru, Easter Island, and Samoa, with stops in Australia, Cambodia, India, and Turkey, on the way to Morocco.

Even the most widely traveled among the passengers on last year’s Around the World trip—A&K’s founder, Geoffrey Kent himself—sounded unusually excited when discussing the itinerary: “This trip is a chance for me to revisit some of my favorite less-known destinations and to discover some of the places I’ve never been.”

Bali was the midway stop of the trip. The A&K travelers had eased into their journey aboard two riverboat hotels on the Peruvian Amazon, where each stateroom looked out on the wilderness through big picture windows. Skiff excursions plunged them into the teeming world of the Amazon. A few of the guests cast lines into the murky river and pulled up fierce little piranhas that flapped about the bottom of their skiff. Farther downriver, one guide spied something rippling the surface and impulsively plunged into the water after it. He emerged wrestling a 10-foot anaconda, which he draped over the shoulders of his passengers—to the amusement of some and the repulsion of others.

A day after their encounters with piranhas and anacondas, the travelers were on Easter Island, nearly 3,000 miles from the Amazonian jungle, sauntering along the beach or riding horses among the emplacements of moai, the famous towering stone statues. Easter Island gave way to a laid-back day in Samoa, and Samoa preceded the intense experience in Papua New Guinea.

The Four Seasons in Bali provided a brief but much-needed respite for the travelers. From Jimbaran Bay, the group flew at dawn to Flores, about 600 miles east. There, they boarded Dunia Baru, a new 170-foot sailing yacht that resembles a traditional Indonesian schooner, and spent a day cruising among the Lesser Sunda Islands on their way to Rinca. On that island, Komodo National Park rangers led the A&K travelers along a circuitous forest-edge trail that was uphill from the patches of shade where giant Komodo dragons, the world’s largest lizards, dozed in the midday heat. A few deer, the main prey of the dragons, stirred nervously in the grass a hundred yards away.

The second day in Bali featured an exploration of the country’s spiritual side. Another police escort led the group to the holy spring at Tirta Empul Temple, where they donned sarongs as a show of respect and joined hundreds of Balinese Hindus streaming into the temple complex. Some of the visitors bore little more than the clothes on their backs as they waded into pools to be ritually cleansed in the flowing waters. Others marched in disciplined groups and prayed en masse in white robes. Still others carried offerings of fruit or flowers to Vishnu, the deity to whom the temple is dedicated. Incense wafted through the air while chanted prayers created a steady hum.

“You see how people live, and it helps you learn how you might live your own life,” said one of the A&K travelers. “I’m impressed how their spirituality helps them. I’ve grown much more understanding since I have been traveling.”

From the temple, the travelers withdrew to a nearby private Hindu religious retreat, where they knelt before an altar as they were instructed in the forms of prayer and then blessed with a baptism of coconut water. After that ritual purification, they crouched around straw mats and learned to weave a proper Balinese flower offering. Before leaving the temple, each traveler consulted individually with an astrologer and palm reader, whose forecasts of the future generally spoke of continued health and freedom from financial worries. On the final evening in the country, a Balinese prince hosted an outdoor feast that included the performance of a traditional dance depicting the unending battle between the evil witch Rangda and Barong, the lion-dragon that represents good.

The scene next changed to Sri Lanka, a country whose civil war discouraged tourism for decades. A&K took over the entire Amangalla resort, which is located within the ramparts of the 17th-century Galle Fort, a touchstone of Sri Lanka’s colonial tradition. It is a three-story structure that was built as the Dutch governor’s mansion and became a hotel during 19th-century British rule, when Sri Lanka’s vast tea plantations were established. At the Handungoda White Tea Estate (a producer of one of the world’s priciest and most delicate teas), white-gloved and masked workers snipped tea leaves. Some of the A&K group spent a few hours in Galle shopping for the sapphires that are mined nearby and have been famous since Ptolemy praised them in the second century AD in his Geographia.

Adventure was calling, and on day 18 the group boarded helicopters to fly a little more than 150 miles into the country’s central highlands, to Sigiriya, a 5th-century fortress turned monastery. The structure, which sits on a barren mountain rising from the surrounding jungle, is one of the great artistic and engineering achievements of Sri Lankan antiquity. Entering through the massive gateway of brick and stone called the Lion’s Mouth, Kent led the way up stairs cut into the 600-foot-high rock wall, pausing along the way to survey rock paintings of voluptuous women. The climbers were huffing and puffing after a one-hour ascent under the midday sun. When they reached the summit and the ruined walls of the palace that once stood there, they were rewarded with a view of the jungle for miles around.

Many members of the group remained at ground level, choosing to inspect holy caves or climb onto elephants for a lakeside amble. They were husbanding their energy for the next stops: spice plantations and lemur colonies in Madagascar, wild-game drives in Kenya’s Maasai Mara savannah, and then a glamorous reentry into Western life in Monaco.

For some, the experience that would leave the most lasting impression had already taken place, in Papua New Guinea. “I think the point of this kind of travel,” said one of the guests of the scarification ritual, “is to startle us into the realities of the world.”