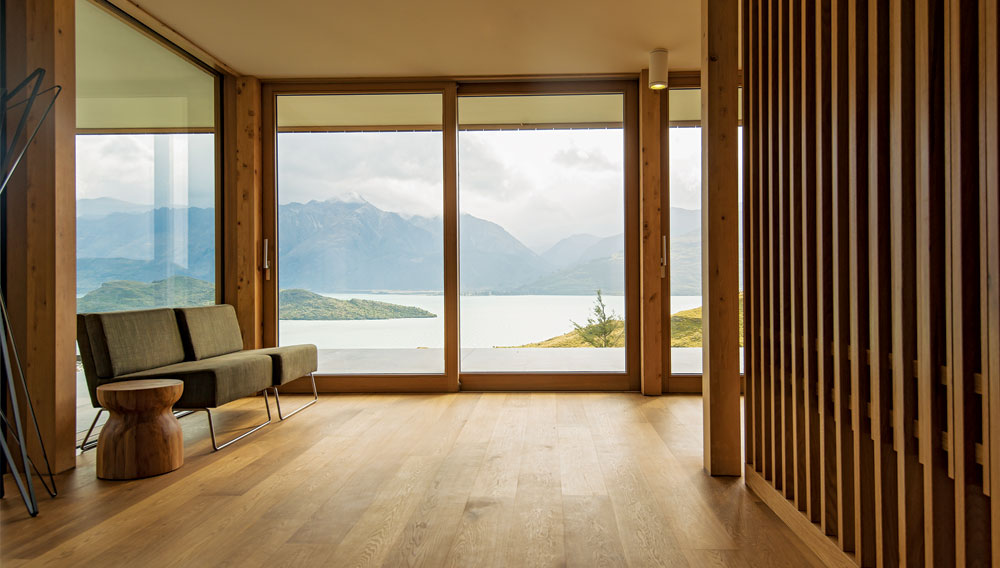 Set along the edge of Wakatipu Lake, Aro Hā offers a Malibu-influenced wellness experience in the heart of the Southern Alps.

A new wellness adventure retreat in the Southern Alps serves up physical and mental makeovers.

The soaring granite peaks of Mount Judah surge above the sapphire water of New Zealand’s Wakatipu Lake. I am traversing a zigzagged trail, twisting up and down the Southern Alps’ undulating grasslands, with every turn affording a new angle from which to study the snow-dusted crests above me. My mind, however, is not on the Lord of the Rings surroundings, but rather on the torn cartilage in my right knee. Creaking and aching, winded and weakened, I stop to catch my breath, feigning a sudden photographic interest in the jaw-dropping views.

With a long-standing knee injury and an even longer-standing dislike for yoga, I had come to dread my first day at Aro Hā, a new holistic resort near Queenstown on New Zealand’s South Island. Opened in January, the 20-room retreat offers five- and seven-day all-inclusive wellness adventures that combine fitness with meditation and nutritional education. My five-day Invigorate and Enrich program (priced from about $4,000) promised to improve not only my physique and mental state but also my “direction of life.”

My skepticism upon arriving at Aro Hā might seem familiar to Chris Madison, the U.S. entrepreneur who cofounded the retreat. In 2005, Madison was a reluctant guest at the Ashram near Malibu, Calif., persuaded by a friend to check in at the well-established health spa in order to rebalance his workaholic lifestyle. The experience proved life changing, and after nine more visits Madison partnered with the Ashram’s wellness guru, Damian Chaparro, to create a retreat of his own.

Three years and about $26.5 million later, Aro Hā (which loosely translates to “life force” in the native Māori language) sits on 20 acres of subalpine terrain, its timber structures blending unobtrusively into the pristine landscape. Guests awaken at dawn every morning for sunrise yoga followed by three- to four-hour hikes; afternoons consist of cooking classes, massages, and more yoga. The property’s vegetarian meals might include vegetable-filled rice-paper rolls topped with edible flowers and microgreens, or tasty raw pad thai with coconut-and-pine-nut broth.

After five days on the Aro Hā regimen, I indeed feel invigorated and energized. My clothes are looser, and I am a few pounds lighter. Most of all, much of the pain in my knee—which feels strengthened, stretched, and remarkably sturdy—is gone, and with it, all of my skepticism.