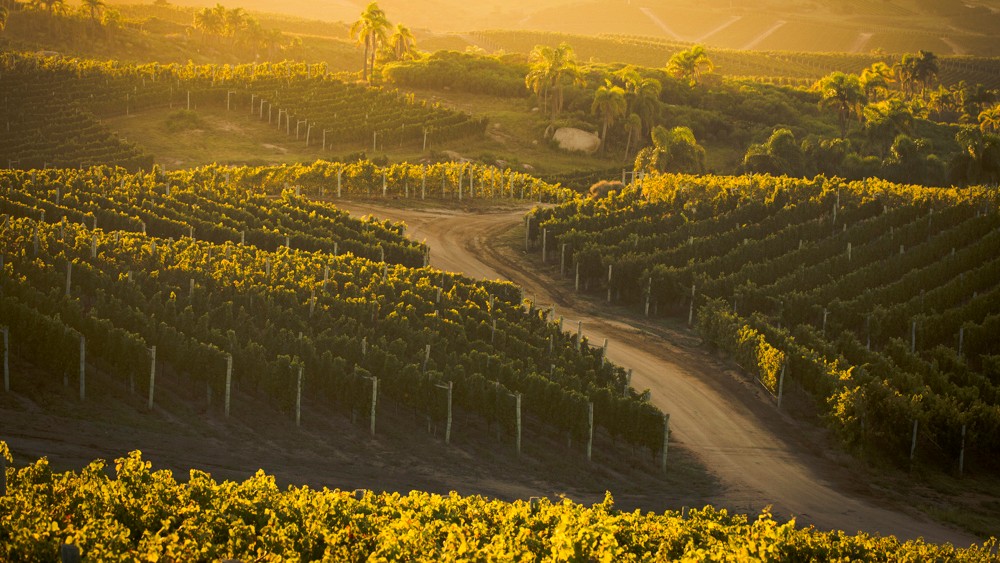 As a fan of Argentina’s wines, and of visiting its wine country destinations like Mendoza and Salta, I had long been hearing about the burgeoning wine scene in neighboring Uruguay. Upon finally visiting the country’s southeastern beach town of Jose Ignacio (a low-key getaway that attracts guests with last names like Zuckerberg and DiCaprio), and the nearby Bodega Garzón vineyards and winery, one thing was clear: judging by the experience at Garzón, things are well beyond burgeoning. Visitors can see this for themselves with the Garzón Premium Experience, which include a private tour of the vineyards, guided tour of the winery, tasting of the most iconic Bodega Garzón wines by your personal sommelier, and lunch with wine pairings at The Restaurant at Bodega Garzón, which is manned by culinary director/celebrity chef Francis Mallmann and his team.

Opened in 2016, the state-of-the-art winery (as well as the members-only, wine-and-golf-centric Garzón Club, which opened to a limited number of members earlier this year), is owned by Argentinean billionaire Alejandro Bulgheroni, who envisioned the place as a “little Uruguayan Tuscany.” (Bulgheroni also has wineries in multiple parts of Italy, California, Argentina, France and Australia.) To bring this to life, influential winemaker and viticulturist Alberto Antonini (which comes with decades of experience making wine from Italy and South Africa to Portugal and California) and winemaker Germán Bruzzone collaborated to create a premium estate-grown, limited-production series of sparkling, white, rose and red varietals that combine old-world elegance and new world energy.

During the Premium Experience, you’ll get to stroll through some of the 2,000 lush acres, 524 of which are vineyard parcels that have been divided into over one thousand individual blocks that follow the distinctive topography. Next is a tour of the incredible, 205,000-square-foot winery, a haven of elegant design, modern technology and sustainability designed by acclaimed Argentina-based architects Bormida & Yanzon, with interiors by Bay Area-based Backen Gillam Kroeger (who also worked on project for Harlan Estates and Ovid.) A private, sommelier-led tasting will feature premium Garzón wines, including icon Balasto, an award-winning blend that is the first Uruguayan wine to be sold at La Place de Bordeaux. Then more wine will flow at a paired meal at the on-site The Restaurant at Bodega Garzón (named one of 2019’s Top 10 Winery Restaurants in the world), which, under the direction of renowned chef Francis Mallmann, celebrates the art of open fire cooking.

If, like me, you can’t bear to leave this idyllic temple to wine, there’s always membership in The Garzón Club, which includes the opportunity to craft your own wines with the vintners (and store them in a private cellar); access to all Bulgheroni wine properties worldwide; VIP access to the winery for food pairings, wine tastings, and educational, recreational and social events; private dining privileges at The Restaurant at Bodega Garzón; and access to an exclusive, private championship, PGA Tour Preferred 18-hole golf course, Los Tajamares Golf Club, located on the estate and designed by Masters and US Open Champion Angel Cabrera. Future club plans include the opening of a Wellness Lodge and Spa, Jose Ignacio Beach Club, Equestrian Club and private residences. The four-hour Garzón Premium Experience is approximately $250 per person.