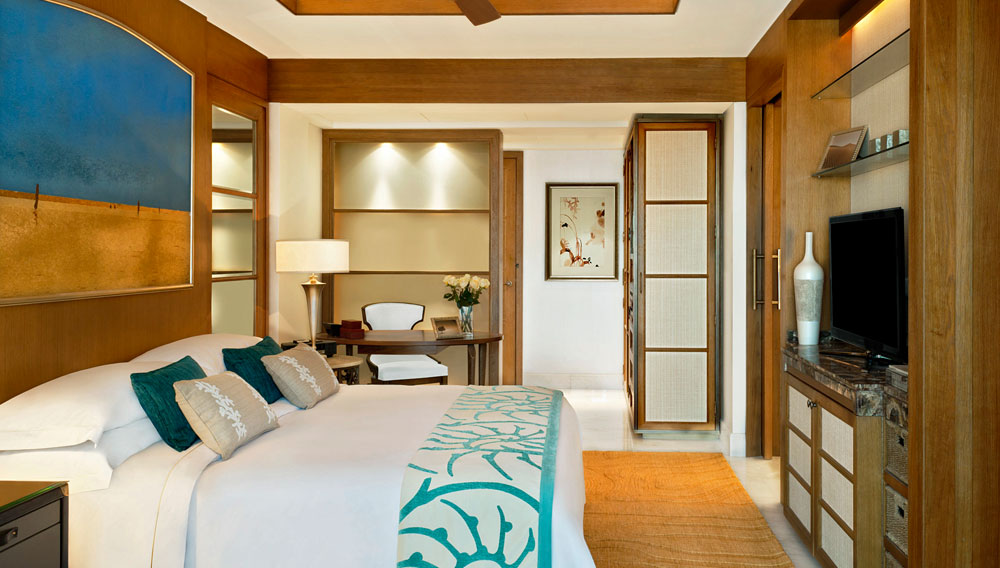 A year and a half old, this 377-room beachfront city resort is set within a larger residential development with expansive spa facilities and a shop-filled plaza resembling a Mediterranean village. While the hotel’s decor is Arabian-meets-Mediterranean, its buzzy restaurant 55&5th, The Grill, reflects the St. Regis’s New York City origins. ($350–$3,000) www.stregis.com

Opened in 2009 in the elegant Beirut Central District, a former battleground, this 87-room hotel offers Mediterranean views from its rooftop pool and open-air restaurant. Try the Cigar Lounge for single malts paired with rare smokes from the humidor. ($350–$5,500) www.campbellgrayhotels.com

Though it is now an 11-room hotel, the elegant Cape Town mansion of the late British shipping magnate Sir John Ellerman retains the ambience of a private home. Rather than checking in at a reception desk, guests are warmly greeted at Ellerman House’s entrance and escorted into a breathtaking estate that is perched above Bantry Bay and bathed in the continual whisper of waves breaking against the rocky Atlantic coastline below. The guest rooms, lounges, and library are decorated with Georgian antiques and a noteworthy collection of South African art; ironed linens smell as if they were hung on a line to dry. The pleasure of candlelit dinners on one of the many terraces—in near solitude, as Ellerman House is not open to the public—is enhanced by a menu specializing in local ingredients and a 7,500-bottle wine cellar rich with South African vintages. The hotel more recently added a dramatic contemporary villa (a second villa will open in December) that seems to hover over the sea. As remote as Ellerman feels, however, it is merely a 10-minute drive to the center of Cape Town in the hotel’s private car. ($500–$9,575) www.ellerman.co.za —Michalene Busico

Giorgio Armani personally detailed everything from the bespoke Maseratis to the hand soaps for this sleek 160-room hotel at the base of the Burj Khalifa, the world’s tallest tower. The Armani-branded spa is a highlight at the hotel, where lifestyle managers ensure that the guest experience is as comfortably elegant as a tailored suit. ($1,100–$10,900) www.armanihotels.com

A magical mix of history and hedonism, this 233-unit, 83-year-old landmark has played host to presidents and prime ministers. The hotel’s top-floor rooms, opened in 2011, are the best options. Outdoors, the vast swimming pool set amid lush gardens strikes a tropical tone. ($400–$4,750) www.danhotels.com

A quiet, contemporary hideaway in the suburb of Sandhurst with 53 suites, some tucked away villa-style amid 6 acres of indigenous gardens. Spa rituals reflect the South African setting, as do the fine-dining options, which include private dinners with city-skyline views. ($900–$3,700) www.saxon.co.za

Since ascending the throne in 1999, King Mohammed VI of Morocco has invested heavily to boost tourism in his country. The crown jewel of his efforts is Marrakech’s Royal Mansour hotel, an extravagant tribute to Moroccan decorative arts that is partly owned by the king himself. He spared no expense when building the nearly 3-year-old property, for which more than 1,000 Moroccan artisans collaborated over four years to craft a regal retreat that seems to be carved from the adjacent medina. A kaleidoscope of zellige mosaics, tadelakt plaster, and iron latticework unfolds throughout the 8.7-acre grounds, where 53 one- to four-bedroom riads feature opulent marble baths and silk wall coverings. Also on hand are a spa, a hammam, and a fitness center; two restaurants with menus by the revered French chef Yannick Alléno; and a subterranean system of tunnels and lifts that is used by the staff of 500 to attend discreetly to guests’ needs. ($1,875–$47,000) www.royalmansour.com —Scott Getz

The urban-loft ambience of this 137-room hotel adjacent to the U.S. embassy attracts the creative and political elite. Nearly 1,000 works of African art fill the contemporary property, which includes a 10,000-square-foot spa. The largest Maasai marketplace in Kenya occurs weekly in the adjacent Village Market. ($300–$1,500) www.tribe-hotel.com