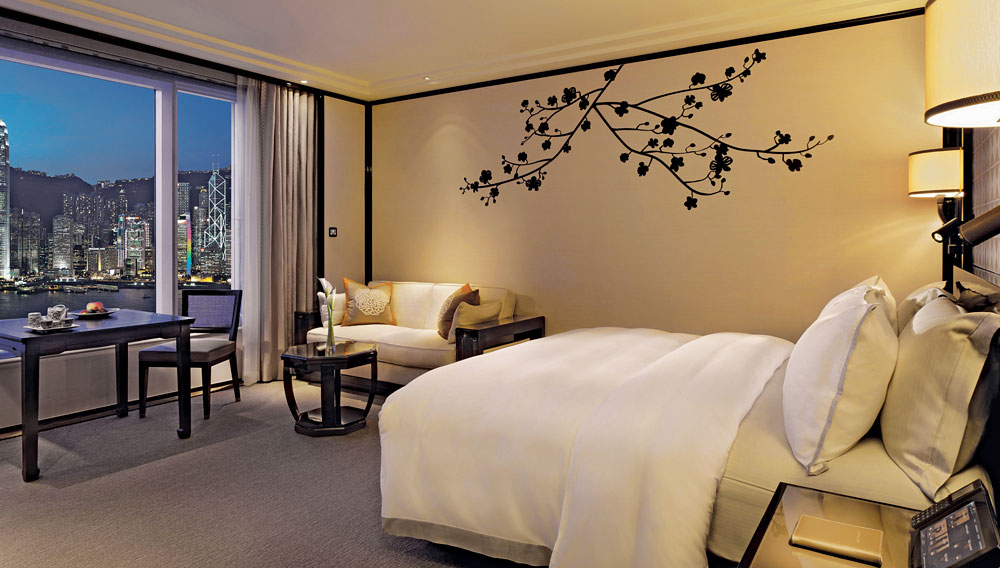 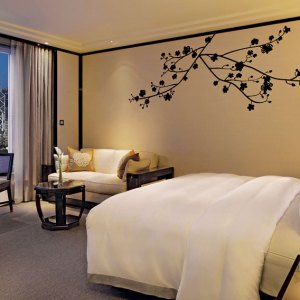 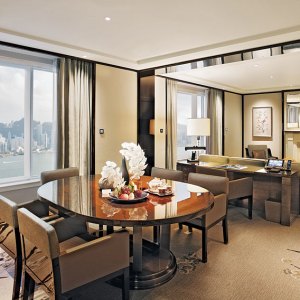 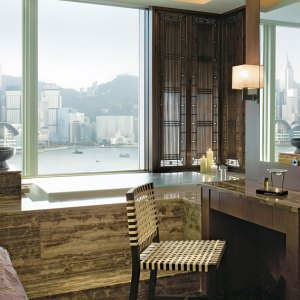 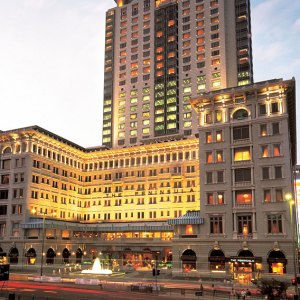 Just 2,000 feet from the Taj Mahal, this respite from tourist-overrun Agra is surrounded by 9 acres of terraced gardens, fountains, and reflection pools. Each of the 95 rooms and seven suites faces India’s most famous monument, which glows in the moonlight. ($750–$975) www.oberoihotels.com

A throwback TO the golden age of travel, the Siam sits on the shores of Bangkok’s Chao Phraya River, in the leafy district of Dusit. Guests can arrive at the year-old hotel by speedboat, bypassing Bangkok traffic en route to a 1920s-inspired escape from the city’s chaotic center. Veranda-like corridors connect the hotel’s 39 high-ceilinged suites and 10 art deco–style waterfront villas, the latter of which are outfitted with private plunge pools and river-facing rooftop decks. A century-old, wing-tipped teak house—originally transported from Ayutthaya to Bangkok by the silk tycoon Jim Thompson—accommodates the Siam’s Chon restaurant, where guests dine on authentic Thai cuisine while river barges float past. The hotel owner’s collection of museum-quality antiques and art—Burmese Buddhas, vintage French travel posters—are sprinkled stylishly throughout the hotel, from the private cinema and Opium Spa to the bakery, gym, and barber shop. ($550–$1,550) www.thesiamhotel.com — Cynthia Rosenfeld

Former Chinese Imperial courtyard dwellings have been reborn as 51 guest rooms with exposed wood beams and opium beds. A private door leads to the thousands of pavilions and gazebos at the Summer Palace, best seen at sunrise. Thirty minutes by car from Beijing’s city center. ($750–$4,000) www.amanresorts.com

Opened last November amid the embassies and businesses along the Liangma River, this serene yet central 313-room hotel features high-tech amenities, exceptional regional fare, and an infinity pool with panoramic city views. ($275–$15,900) www.fourseasons.com

More Zen retreat than bustling city hotel, this property with 78 rooms and three villas is set along the banks of West Lake, just minutes from downtown Hangzhou. Resort-style amenities include a spa and verdant grounds filled with gardens and lily ponds. ($425–$9,200) www.fourseasons.com

Nestled in one of the city’s two French Quarters, this renovated colonial grande dame is lined with  green-shuttered windows that look out to a lush courtyard. Two wings (one colonial and one contemporary) house 22 suites and 342 rooms, all steps away from Hanoi’s Opera House. ($250–$3,000) www.sofitel.com

Louvered windows, ceiling fans, and four-poster beds set a colonial tone in the 244 guest rooms at this property on Ho Chi Minh City’s historic Lam Son Square. The English-speaking staff is exceptional, as is the cuisine that comes out of the five dynamic show kitchens at Square One restaurant. ($275–$2,575) www.parkhyatt.com

Responding to formidable new competition and with the hotel’s 85th anniversary in mind, the Peninsula Hong Kong last year embarked on a long-overdue renovation. Now completed, the makeover has transformed all 300 guest rooms in both the tower and the original 1928 building into high-tech havens, where multilingual tablets on the desks and night stands control everything from the entertainment systems to the in-room printers. The hotel’s preeminent French restaurant, Gaddi’s, last year welcomed a new Parisian chef, Rémi Van Peteghem, and the property’s underground bar remains one of the best in Hong Kong. Upstairs, the lobby lounge can be as crowded and chaotic as the surrounding streets of Tsim Sha Tsui, but the rest of the hotel is a true oasis, particularly the two-story spa, whose sublime relaxation lounge offers an unobstructed view of Victoria Harbour. Avoid the frenetic lobby and front-desk scene altogether by coming and going via air transfer from the rooftop helipads, an amenity no other Hong Kong hotel can match. ($750–$16,400) www.peninsula.com — Brad A. Johnson

The pool at this 2-year-old, 312-room hotel offers vertigo-inducing views from the 118th floor of Hong Kong’s tallest building. Tin Lung Heen, on the 102nd floor, is one of the city’s finest Chinese restaurants. ($925–$16,750) www.ritzcarlton.com

This 32-acre urban oasis—complete with parrots and peacocks—is an ideal escape from the Pink City’s frenetic bazaars. Air-conditioned tents and pool villas are among the 71 accommodations, where four-poster beds and sunken marble bathtubs exude contemporary Rajasthani opulence. ($750–$6,150) www.oberoihotels.com

The Malaysian capital’s futuristic skyline fills picture windows in many of the hotel’s 643 rooms. Arabian melodies fill the tropical air at the Casbah, one of 10 restaurants and bars on the property. ($175–$9,675) www.mandarinoriental.com

From a prime location in the 12,000-foot-elevation city of Lhasa, the 162 butler-served accommodations at the St. Regis all look out to the Himalayas. Amenities include one of the world’s highest luxury spas, the world’s first gastronomic Tibetan restaurant, and Tibet’s first wine bar. ($325–$600) www.stregis.com

A 20-story oasis of refinement amid the neon bling of the Cotai Strip, this 360-room retreat on the quiet side of the Venetian casino fuses neoclassical decor with Chinese accents. There are five pools plus five restaurants and bars, with menus that reflect Macao’s Portuguese and Chinese heritage. ($725–$8,000) www.fourseasons.com

The Villas at Crown Towers

A lavish, ultraexclusive hotel-within-a-hotel at what is already Melbourne’s finest address. The hidden entrance for the Villas directs guests to the 30th through 38th floors, where butlers cater to every whim. ($2,025–$29,575) www.crowntowers.com.au

Tucked within the treelined Diplomatic Enclave, this 260-room tower opened in 2011 with a two-story Espa facility and Le Cirque and Megu restaurants. The butler-serviced presidential suite is equipped with a gym and private elevator, and comes with a chauffeured Rolls-Royce. ($250–$4,500) www.theleela.com

A sleek glass skyscraper in the glitzy Gangnam district with 185 rooms with floor-to-ceiling windows. Highlights include a top-floor lounge, a whisky bar with Korea’s largest premium collection, and a Park Club Spa with an indoor infinity pool. ($375–$4,975) www.parkhyatt.com

High-tech conveniences stand out against a backdrop of 1920s China at this 4-year-old, 235-room hotel, which looks out from Shanghai’s iconic Bund to the Huangpu River and across to Pudong. Walk to trendy clubs and restaurants or be chauffeured in a vintage Rolls-Royce. ($550–$16,800) www.peninsula.com

Sitting on stilts above Marina Bay in the former immigration terminal of Clifford Pier, this 100-room hotel has gracefully merged the past with the future since opening in 2010. The five Thames Suites are the most coveted rooms in Singapore.

The 24-floor facade of the hotel resembles the glowing lightness of a Japanese lantern. Inside, 267 spacious guest rooms and 47 suites overlook the Imperial Palace gardens and showcase a sampling of the hotel’s thousand-piece Japanese art collection. ($650–$21,000) www.peninsula.com