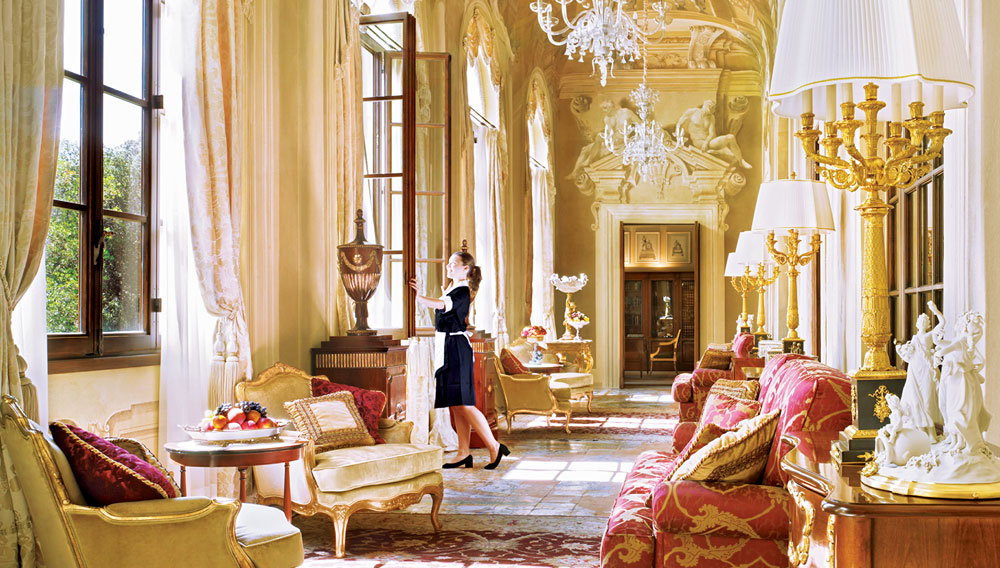 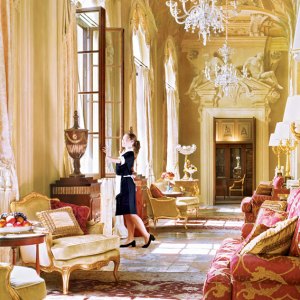 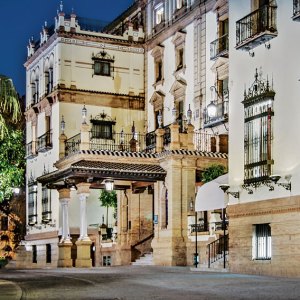 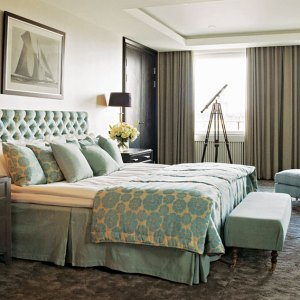 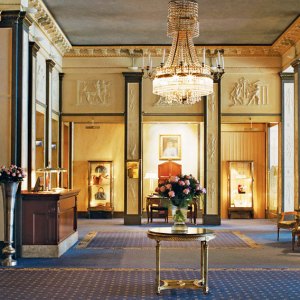 Travelers have any number of hotel ratings systems at their disposal, offering stars, diamonds, and even crowns to compare properties from Dubai to Des Moines. More often than not, however, such rankings fail to address the basic issue of which property is the single best place to stay in its given location. For this year’s Robb Report 100, our editors, writers, readers, and expert travel consultants all weighed in on that fundamental question to create a one-of-a-kind compendium of the top hotels in 100 cities worldwide. Sometimes the decision was unanimous; other times it was not so clear—in some cases leading us to declare a tie (see London, Paris, New York, Las Vegas, and Hong Kong for examples). Still, whether for business or leisure, if your travels take you to any of the 100 cities featured on the following pages, Robb Report has a singular spot for you.

A 19th-century grande dame overlooking the Amstel River at the center of the city’s bustling markets and canals. The 111-room hotel, which completed a nearly $80 million renovation in 2011, offers Michelin-starred dining and the classic Freddy’s Bar, honoring the hotel’s former owner, Alfred Heineken. ($825–$2,825) www.leurope.nl

This stately 320-room hotel on Constitution Square grants easy access to the Acropolis and the charming Plaka neighborhood beneath it. GB Roof Garden offers cuisine by the Michelin-starred chef Asterios Koustoudis and direct views of the Parthenon. ($325–$19,000) www.luxurycollection.com

A 44-story tower built for the 1992 Olympics and overlooking the city’s vast beachfront. Decorated in the manner of a private home—one with more than 500 original works of contemporary Spanish art—the 483-room property includes a Six Senses Spa and a modern Mediterranean restaurant. ($375–$15,575) www.hotelartsbarcelona.com

Across from the main train station in the heart of the charming Swiss capital, this 150-year-old hotel reopened in 2011 following extensive renovations. An old-air elegance still pervades the property, from the Cigar Lounge to the 99 guest rooms. ($350–$2,050) www.schweizerhof-bern.ch

A former jail just steps away from the city’s most famous landmarks: Manneken Pis and the spectacular Grand Place. Belgian chocolates and images from the Adventures of Tintin seriesanchor the sense of place in the 173 bright and comfortable rooms. ($300–$6,500) www.roccofortehotels.com

Facing Tivoli Gardens—the world’s second-oldest amusement park—this 17-room boutique hotel has a Taj Mahal–like exterior that could be mistaken for a carnival ride. Five restaurants and bars include Vinotek, which features one of the most extensive wine lists in Scandinavia. ($425–$3,475) www.nimb.dk

In Dresden’s cobblestoned historic center, this 18th-century baroque castle has been rebuilt to its prewar opulence. The 182 rooms are large, the 32 suites palatial. Reserve the blue-mosaic indoor pool for a midnight swim. ($200–$12,300) www.kempinski.com

Like staying in a family member’s 1760s Dublin townhouse with a first-rate chef, a white-gloved dining staff, and a museum-quality art collection. Each of the 142 high-ceilinged, tall-windowed rooms in the meticulous hotel incorporates Irish fabrics and antiques. ($625–$4,350) www.merrionhotel.com

This 188-room baronial landmark looks up to the city’s hilltop castle. Contemporary interiors inspired by the moors, mists, and heathers of the Highlands pair well with the 12-year-old Glenallachie Speyside Single Malt Whisky offered at turndown. ($640–$3,450) www.roccofortehotels.com

Part 15th-century palace, part 16th-century convent, the Four Seasons Hotel Firenze offers a modern luxury experience in a Medici-style setting. The property, which opened as a hotel in 2008, is planted within Florence’s largest private garden, 10 minutes by foot from the city center. The grounds and the two meticulously restored structures are home to 116 guest rooms and suites, a 90-foot lap pool, the Michelin-starred Il Palagio restaurant, and a 10-treatment-room spa with products from Santa Maria Novella, Florence’s oldest pharmacy (known to have been a favorite of Catherine de Medici). Airy accommodations amid the palace’s frescoes, friezes, and bas-reliefs include the Royal Suite (della Gherardesca; pictured), with its grand piano in the living room, and the Presidential Suite (de’ Medici), which features an elongated balcony looking out to centuries-old trees in the 11-acre Giardino della Gherardesca. ($350–$20,100) www.fourseasons.com — Meg Nolan van Reesema

A four-building complex with 163 rooms, including a huge presidential suite, in continental Europe’s financial hub. The four-story Villa Spa is equipped with extensive fitness facilities and an indoor pool. ($325–$15,625) www.roccoforte​hotels.com

This 115-room hotel has graced the shore of Lake Geneva since 1834. Renovations completed this year encompass 18 contemporary-styled rooms and suites, three presidential suites, and a rooftop spa and fitness center with a glass-enclosed swimming pool. ($675–$15,900) www.fourseasons.com

Kempinski’s German flagship property rises castle-like from the shore of Lake Alster. Refurbished in 2012 with an eye toward the contemporary, the century-old building has 245 rooms (many with lake views) including the spacious Atlantic Suite. ($200–$4,800) www.kempinski.com

The exalted lobby of this 19th-century wedding cake of a palace drips with crystal, marble, and precious metals fit for a sultan. Highlights of the 170-room hotel include three modern hammams and 25 opulent suites, many with privileged views of the Bosphorus. ($700–$9,775) www.fourseasons.com

Dominating the city skyline, this 10-story, 282-room hotel offers uninterrupted views through to the Tagus River. The service-driven property features an authentic Portuguese restaurant, an intimate bar, and a rooftop jogging track around a glassed-in pool and spa. ($550–$10,600) www.fourseasons.com

This discreet, 121-room retreat in the heart of gilded Mayfair is the epitome of English elegance. Highlights include a pair of popular bars, a fine-dining venue from the French chef Hélène Darroze, and a spa by Singapore’s Amanresorts. ($1,250–$18,275) www.the-connaught.co.uk

Refreshed, reconfigured, and redesigned in 2011 for $200 million, the Four Seasons now features fewer guest rooms but more suites (147 and 46, respectively), and, unlike any other hotel in London, a rooftop spa with unbeatable city and Hyde Park views. ($675–$18,900) www.fourseasons.com

The Lanesborough, a St. Regis Hotel

This 93-room London landmark drips with the grandeur of an English country home. At the Michelin-starred Apsleys, the chef Heinz Beck purveys some of the city’s finest Italian cuisine in one of its best dining rooms. ($750–$27,425) www.stregis.com

Built in 1910 to suit King Alfonso XIII, this 167-room hotel has since been revived to its gilt-and-brocade majesty by Orient-Express. As a counterpoint to formality, the lush Terrace and Gardens is one of the most cherished spots in town for tapas. ($800–$7,375) www.ritzmadrid.com

Long a favorite of royals and celebrities, this 1864 structure on the main square, adjacent to the city’s iconic casino, features 182 guest rooms and suites, an Alain Ducasse restaurant, and a prime vantage for watching the Monaco Formula 1 Grand Prix. ($575–$13,500) www.hoteldeparis​montecarlo.com

Steps from Red Square, the 334-room palace dazzles with marble-inlaid floors, crystal chandeliers, and silks. Swim in the pool lined with Swarovski crystals or take in panoramic views of the Kremlin from egg-shaped Fabergé chairs in the futuristic rooftop lounge. ($675–$16,400) www.ritzcarlton.com

The terrace atop this 73-room neo-Renaissance gem in Old Town’s Marienplatz district originally served as the city’s dancing house. Inside, contemporary Asian design is complemented by neo-Biedermeier cherrywood furniture. During winter, find Bavarian cuisine, music, and dancing at the rooftop Wooden Chalet. ($800–$20,775) www.mandarinoriental.com

A legendary address off the Champs-Élysées in the most fashionable quarter of Paris, with 244 impeccably appointed, light and airy guest rooms—including a new pied-à-terre-style penthouse suite—and a Michelin two-star French restaurant. ($1,050–$25,825) www.fourseasons.com

Formerly Prince Roland Bonaparte’s palace, this 117-year-old structure opened as a hotel in 2010 after four years of restorations. Many of the 81 rooms offer views of the Seine and the Eiffel Tower. Home to a Pierre-Yves Rochon–designed spa and two Michelin-starred eateries, including the Shang Palace Chinese restaurant. ($1,200–$26,000) www.shangri-la.com

Perched over the port-aging lodges lining the Douro River, the 3-year-old, 82-room Yeatman manages to be themed entirely around the wines of Portugal without resorting to kitsch. The restaurant earned a Michelin star in 2011, and the Caudalie Vinothérapie Spa uses soaking tubs fashioned from oversize port barrels. ($275–$1,150) www.the-yeatman-hotel.com

A 99-room enclave of modern and centuries-old structures surrounded by the Malá Strana district’s cobblestones and spires. The spa is located in a former Renaissance chapel; the 14th-century Charles Bridge is two minutes away by foot. ($375–$2,850) www.mandarinoriental.com

Famously perched above the Spanish Steps, this 96-room boutique hotel has honed its style over generations of family ownership. Imàego, the sixth-floor restaurant, affords wraparound views of the Eternal City’s magnificent cupolas and monuments. ($525–$19,475) www.hotelhasslerroma.com

The Astoria celebrated its 100th birthday last year with a redesign of its 188 guest rooms and suites, which are now accented with colorful Volga linens and stills of Sean Connery in From Russia with Love. Try the luscious pelmeni (Russian dumplings) at the hotel’s restaurant overlooking St. Isaac’s Cathedral. ($375–$25,500) www.roccofortehotels.com

This classic 113-room hotel in Austria’s most beloved small city carries on the family-owned Sacher tradition with friendly and personal service. Offers views across the river to one of the most beautiful old towns in Europe. ($400–$4,900) www.sacher.com

Ideally situated on the Urumea River, this 100-year-old belle epoque landmark reopened in October following a $25 million face-lift. Fin de siècle features now pair with a muted palette of grays and pastels in each of the 136 eclectically furnished rooms. ($225–$2,950) www.luxurycollection.com

The brainchild of the French restaurateur Jean-François Régis Cadier, Stockholm’s Grand Hôtel opened in 1874 in the presence of King Oscar II. The brick-red grande dame, which overlooks the Royal Palace on Stockholm’s lively waterfront, hosted the inaugural Nobel Prize ceremony and banquet in 1901 and today remains the official host of Nobel Prize winners. Occupying three interconnected buildings, the 368 guest rooms and 37 suites are distinct in design, though each stays true to its classic confines. More contemporary is the Nordic Spa & Fitness center, where visitors can enjoy a Swedish massage and sauna followed by a swim in the indoor pool. Two of Sweden’s most acclaimed restaurants—the more relaxed Matbaren, with one Michelin star, and the formal Matsalen, with two—build on the Grand’s culinary roots, offering modern Swedish cuisine by the celebrity chef Mathias Dahlgren. ($375–$10,925) www.grandhotel.se — Alexander Kulish

This 82-room palazzo completed a two-year, head-to-toe renovation in February. The hotel’s enviable location on the Grand Canal, minutes by foot from St. Mark’s Square, is best appreciated at the waterfront Club del Doge restaurant. ($550–$15,625) www.luxurycollection.com

Founded in 1876 and run since 1934 by the Guertler family, this 149-room property completed an expansion and renovation led by Pierre-Yves Rochon in 2011. Delectable pastries and Champagne offer a true taste of Viennese life. ($600–$7,125) www.sacher.com

On the lake and at the foot of one of the world’s great shopping streets, this five-story, 120-room stone hotel offers a thoughtful and traditional luxury experience led by the same family that opened the property in 1844. Four restaurants include the year-round garden retreat Pavillon. ($925–$3,850) www.bauraulac.ch