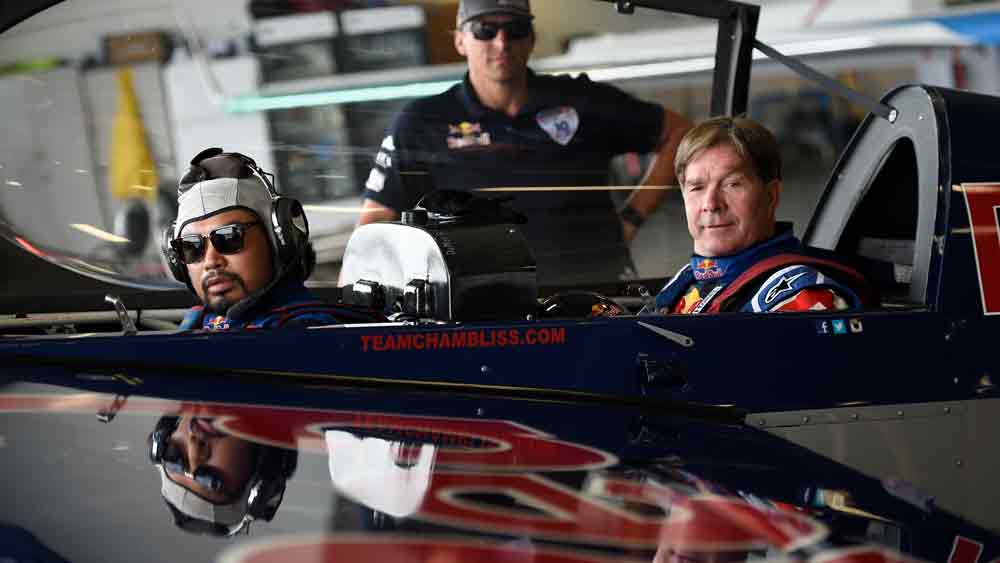 The morning I was scheduled to fly with world-champion aerobatic pilot Kirby Chambliss, I was a bundle of nerves. I have never been a fan of heights. I don’t love flying. And yet, there I was, hydrating in the waiting room of a small airport in western Indianapolis, about to board a Zivko Edge 540T two-seater in which Chambliss would perform the kind of gravity-defying tricks that have made him an icon in the world of air racing.

Admittedly, I’m more adept at activities like devouring sushi omakase and sipping cocktails, but a call from Chambliss to twirl through the air like a drunken bird seemed like the perfect opportunity to push myself out of my well-preserved comfort zone. Anyway, I had always been a fan of gymnastics; perhaps this was my chance to feel like Simone Biles (without the flexibility or years of training, of course).

As I waited in the airport, however, I overheard a conversation that challenged my well-intentioned optimism. Chambliss’s team—an unsurprisingly fearless bunch—was engaged in a roiling debate over whether it was better to vomit or pass out during a flight. They also considered the unpleasant scenario of being made to experience both at the same time. Surely they knew I was listening, I thought. Surely this was an initiation that all of Chambliss’s passengers went through.

I pondered their conversation—and regretted the heavy breakfast I’d had a few hours earlier—but ultimately shelved the idea of quitting. After all, I was already outfitted in my one-piece Red Bull aeronautics suit, and I wasn’t about to throw away this once-in-a-lifetime opportunity. So I got on the plane, put on my flight cap, and we were off.

Once in the air, Chambliss was like the perfect gentleman on a first date—he assured me he wouldn’t do anything I didn’t want him to do. Before each swoop, twist, or turn, he explained to me through our headsets what he was about to do. It was oddly reassuring to hear exactly how he was going to lean the plane side to side, and then, seconds later, feel my body tilt nearly parallel to the earth.

The flight shifted from that smooth joyride to an adrenaline-fueled whirlwind when Chambliss announced that he was going to test our safety belts by turning the plane upside down. This gives his passengers the opportunity to tighten their strappings should they not feel secure enough. As soon as the plane flipped, I slid toward its roof. Time to tighten those straps.

What followed was a series of turns, barrels, and flips—so many unrecognizable movements, yet somehow, with Chambliss calmly at the helm, my fears began to wane. As I was tossed around in the sky, sustaining the intense g force, I struggled to keep my eyes open and my head up. We shifted up and over, and my stomach dropped down to my knees. At the urging of Chambliss, I forced myself to squint my eyes open. There, just ahead, was the unmistakable grid of Midwest farmland below, twirling around in front of us, the nose of the plane pointing straight toward the earth. I hadn’t passed out or vomited, I thought, triumphantly recalling Chambliss’s team’s conversation. With a trembling hand, however, I reached for a plastic bag—just in case.