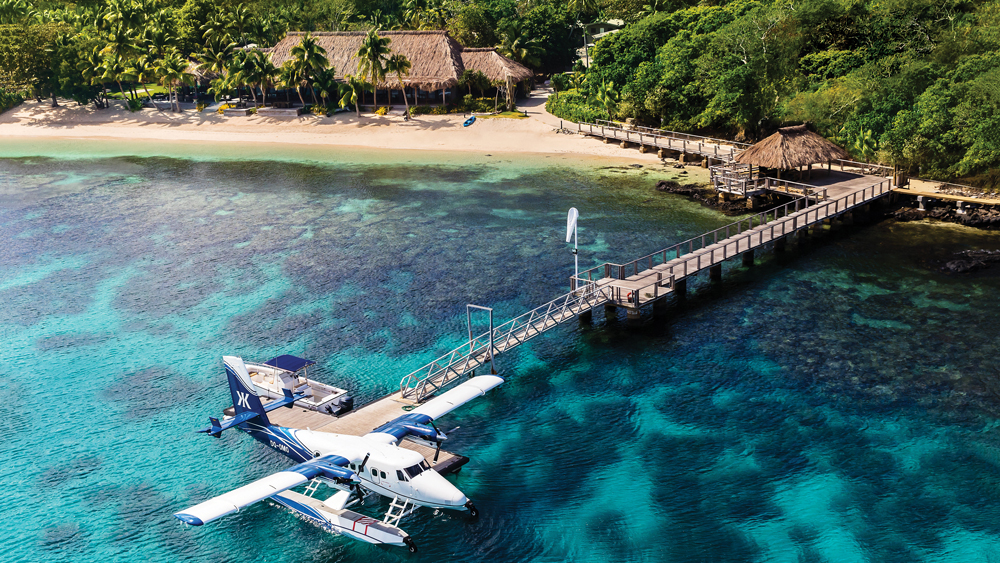 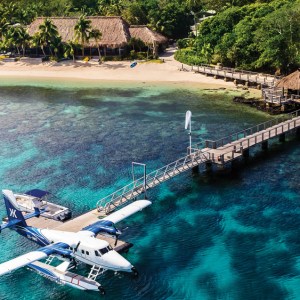 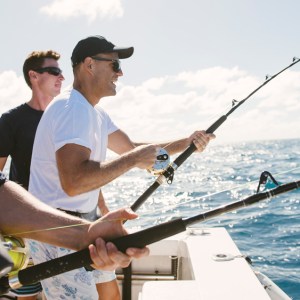 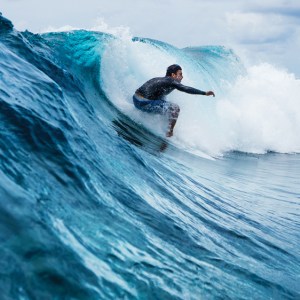 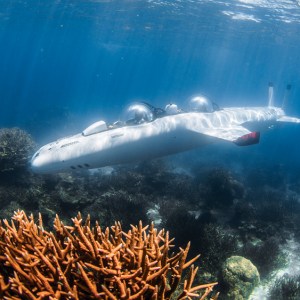 Charles’s flippers are growing smaller and smaller as he descends deeper and deeper into the Pacific Ocean—and I’m floating on the surface of the water. “Wait here,” he had said with a wink, before taking a deep breath and free-diving into the sparkling blue. So I wait, counting the seconds he’s under. Bobbing like a buoy, peering down through my goggles, I watch him—now some 30 feet below, gripping his long spear gun at his side—disappear beneath an overhang of ashy coral reef. Suddenly I’m all alone out here in the open water. The nearest landmass is miles away.

Without warning, a snap ricochets through the water, and a cloud of tiny bubbles scuttles up from the reef. Then, through the fizz, Charles emerges victorious, gun in one hand, giant leopard coral trout in the other, and a streak of red trailing behind.

“Easy, right?” he says at the surface, holding up his brilliant orange catch. Easy for Charles, anyway. The native Fijian has spearing in his blood: He’s been doing it for decades, since he was barely old enough to walk. Whereas he once collected as many as 50 catches per day to bring back to his village, he now shares his aquatic prowess with the guests at Wakaya Club & Spa, a private-island resort east of the Fijian mainland.

It wasn’t long ago that spearfishing simply wasn’t something you did at Wakaya. Like most other resorts in Fiji, the island was the kind of place where guests were expected to do a whole lot of nothing. Holding hands, lying on hammocks, and dining over candlelit tables in the sand were considered worthy pastimes. Holding your breath as long as you can while you lie in wait to spear your next dinner was not.

But then something happened: A new generation of resorts began to arrive, and with their shining suites and unspoiled beaches they brought to this land of leisure a fresh thirst for adventure. First came Laucala Island, Red Bull CEO Dietrich Mateschitz’s private-isle wonderland where guests can explore the depths of the ocean aboard a Super Falcon submersible. Then it was Nanuku, Auberge Resorts Collection, whose menu of activities ranges from shark diving to rugby lessons. Vatuvara Private Islands came next; the passion project of Oakley sunglasses founder Jim Jannard has fast become a mecca for anglers in search of Fiji’s famed dogtooth tuna.

It’s a bit of a wonder that, until recently, the Fiji experience was so largely devoid of, well, Fiji. Since the first luxury resorts opened in the 1970s, outsiders had been scooping up the nation’s tiny islands and turning them into exclusive hideaways where the biggest attraction was that there was absolutely nothing at all to do. Save for the occasional sip of kava and the traditional tapa textiles in the rooms, little truly represented the spirit of this country. But this new school of resorts has lured guests out of their languid holiday daze, offering a connection to Fiji’s customs and culture like never before.

Wakaya might not have been among the new breed were it not for a disaster. First opened in 1990, the resort—owned by Canadian billionaire David Gilmour, who made one of his many fortunes as the founder of Fiji Water, which he reportedly sold for $50 million in 2004—was one of Fiji’s most famously isolated retreats and a chosen escape for privacy-seeking celebrities and CEOs. But in 2016, Cyclone Winston, the most intense tropical storm ever to hit the Southern Hemisphere, tore through Fiji and damaged most of the nation’s 333 islands, Wakaya included. Facing the prospect of a costly rebuild, Gilmour sold the resort to a group of investors that has spent the last two years restoring the island— and improving it with more ecologically sound practices (including a vital coral-protection program) and culturally rooted experiences (such as Charles’s spearfishing adventures).

Winston served as a wake-up call for others, too. As more properties rebuild and new ones put on the polishing touches, the local experience continues to emerge front and center. Six Senses Fiji, which debuted in April with one of the islands’ most sophisticated green programs, is sending its guests out into the water with seasoned surfers in search of epic waves like the legendary Cloudbreak. And Nanuku has expanded its native excursions to address the Melanesian nation’s fragile ecosystem. In addition to dives with the resort’s resident marine scientist to help rebuild coral reefs, guests can also raft through wild mangroves on a traditional bilibili boat to hunt for crabs with a local fisherman.

Of course, Fiji’s layabout allure remains an ever-present temptation. When I check into Kokomo, a new private-island resort at the edge of the Kadavu Group of islands, I find my sprawling villa and infinity-edge pool almost too welcoming to resist. But stretched out on a chaise longue next to the pool is something even more enticing: a wet suit. Hooked by the adrenaline rush of Charles’s triumphant catch, I’ve already made plans for another spearfishing expedition.

That outing takes me to the Great Astrolabe Reef. My guide, Jaga, points to the bright waters ahead as the engines of our speedboat begin to die down. It’s the fourth-largest coral reef in the world and, according to Jaga—an expert fisherman who has hauled in some of Fiji’s biggest catches, including a record-breaking 125-pound wahoo last year—the perfect spot to send a soaring spear through the water.

But once in the water, it’s immediately obvious that, unlike Charles and Jaga, I do not have spearfishing in my blood. “Hold your arm out long and strong,” Jaga says. “Swim slowly so you don’t scare the fish away. And never let the spear pierce the reef.” It’s a lot to remember while holding your breath, but I suck in a deep lungful of oxygen and dive down.

The reef teems with fish, but they move dizzyingly fast. I steady myself to a gliding swim, smoothly moving my fins up and down, and chase a school of bright yellowfin goatfish until they twirl into a dark alcove out of sight.

I glimpse a handsome—and, more importantly, slow-moving—parrotfish. He’s on the edge of the reef, so my angle is perfect. I extend my arm out in achingly slow motion, thrusting the long lightweight gun against the resistance of the water, until I’m pointing it straight at my prey. But suddenly I am out of breath, and the primal fear of running out of oxygen begins to scream its way through my body.

I pull the trigger. The snap of the firing spear is surprisingly loud, causing the fish around me—including my unharmed parrotfish— to frantically flit away. I push to the surface and gasp for air.

Jaga and I continue on like this for hours: him watching me from behind and critiquing my aim; me trying to remember it all and hold my breath. “One more try,” Jaga says after each failed attempt. “This is the last one,” I respond every time. Until finally, patience and luck align.

The silver biddy weighs no more than 10 pounds, and it’s rather ugly— but it’s mine. And an hour later, when I stroll through Kokomo’s lobby, dripping wet, barefoot, and gripping my slippery catch by its jaw, I feel like a Fijian warrior. I slap my prize down on the counter of the open-air kitchen for the chef to inspect.

“It’s just barely big enough for dinner,” he says with a smile. But what a sweet meal it makes when it’s presented at my candlelit table in the sand.