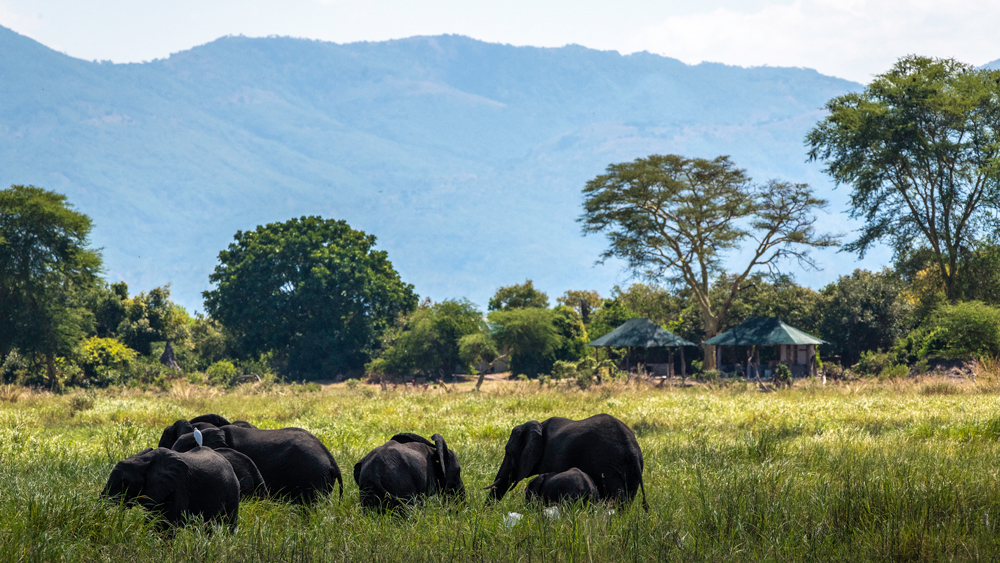 Visitors have long flocked to Malawi for its friendly people, relative ease of travel, and the country’s namesake lake’s glimmering turquoise water. That said, for decades the sliver of a nation wedged between Zambia and Mozambique (and known as “the warm heart of Africa”) was not considered a safari hotspot – poaching and habitat loss decimated major wildlife populations, including big cats, elephants, and rhinos. But now all that’s changing. With a range of personalized tours, Robin Pope Safaris’ new Kuthengo Camp—opened earlier this spring in Liwonde National Park—gives guests a front-row seat to the country’s conservation wins.

Malawi’s animals are making a major comeback thanks to an impressive collaboration between conservation non-profit African Parks and the British military in an effort to protect wildlife and sustainably curb poachers. And Liwonde, which stretches along the eastern shore of the Shire River as it cuts a lazy, 402-kilometer ribbon between Lake Malawi and the Zambezi, is at the center of these efforts. Throughout 2016 and 2017 a massive effort was undertaken to move some 300 of the park’s elephants to reserves in other parts of the country to help populations struggling to recover from poaching, but there are still plenty of opportunities to spot the four-legged giants. The park is also home to the critically endangered black-horned rhino, making it one of the only places in the world to see the rare species. But most exciting for visitors and conservationists alike is the recent reintroduction of lions and cheetahs—both previously extinct in Liwonde—and upcoming plans to bring leopards back into the park’s boundaries.

Though not the first luxury accommodation to settle in at Liwonde, what sets Kuthengo apart is intimacy. With just four tents and a maximum of ten guests, truly bespoke experiences are the norm. In addition to both day and night game drives led by expert guides tailored to your tastes and interests, you can expect to listen to the gurgling roar of snorkeling hippo families on a seasonal boat tour, or scout for cheetah tracks on an adrenaline-pumping walking safari. Better yet, for a wide-angle look at Liwonde’s renaissance, try all three.

After a quick flight from the capital, Lilongwe, an hour-long drive to the lodge through the park offers up the first glimpses of wildlife among the baobabs, mopane woodlands, and Euphorbia candelabrums—a tree-shaped cactus plucked straight from Dr. Seuss’s imagination. Once at Kuthengo, and between adventures, sink into the comforts you’ve come to expect from Robin Pope Safaris. Ensuite bathrooms feature tubs, sinks with views of the palm-studded floodplains, and outdoor showers. An eco-friendly “Evening Breeze” cooling system keeps beds comfortable under the mosquito netting. And private wildlife viewing decks offer an exclusive vantage from which to ogle the life teeming along the river, sundowner in hand.