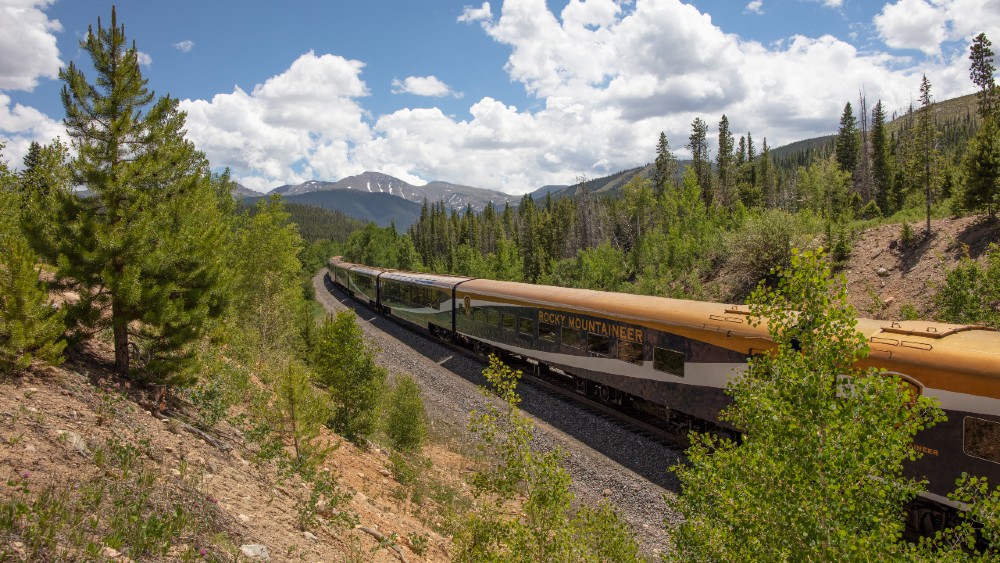 All aboard for a rocky adventure! The five-star train company that helps riders take in the Canadian Rockies in style is gearing up for the first full season of its new route through the American West.

Rocky Mountaineer, a family-owned Canadian luxury train outfit, has for years been bringing guests up close to the spectacular scenery between Vancouver and mountain towns like Banff, Lake Louise and Jasper in Western Canada. Last year, however, the outfit branched out to new territory with its first-ever US rail route, running between Denver, Colorado, and Moab, Utah. The “test launch” only ran for a couple of months, so this April will mark the kick-off of the itinerary’s first full season.

Dubbed the “Rockies to the Red Rocks” route, the experience is based on a core two-day, one-night trip between Denver and Moab (or vice-versa), with the overnight stop being in Glenwood Springs, Colorado—known as the home of the world’s largest mineral hot spring pool. (Note that there are no sleeper car accommodations on the train, so you’ll bunk down in a hotel.) Along the way, you’ll travel alongside the Colorado River and through Byers Canyon and Core Canyon, taking in views of mountains, desert cliffs and rock formations. Unlike the trains used on the Canadian trips, this one doesn’t have full glass domes topping the cars, but as the windows do curve up the sides and onto part of the ceiling, you’ll still get those breathtaking panoramic views.

In addition to the scenery, you’ll also savor multi-course breakfasts, lunches and dinners served at your seat and made with Southwestern-sourced ingredients; menus will change, but might include dishes like roasted pork tenderloin or ale-braised short ribs, paired with wine, beer and spirits. To kick things to another level, upgrade to the SilverLeaf Plus package, which features an elevated dining experience (such as additional courses), premium spirits and access to the lounge car, where you can enjoy signature cocktails, cushy seating and a small outdoor viewing platform.

Opting for SilverLeaf Plus also gets you overnights in higher-level hotels during the mid-trip stopover (such as Glenwood Hot Springs Resort), as well as in Denver and Moab, should you choose to stay in either. For those that would like to extend the fun past two days, packages are available that include pre- and post-train activities; you could do an eight-day, seven-night roundtrip itinerary (with four days on the train), for example, or go for the Rockies to the Red Rocks Explorer Las Vegas with Flightseeing option—new this year—that includes a two-hour sightseeing flight between Moab and Vegas.

Packages for the classic two-day journey start at $1,375 per person, while the Explorer option starts at $3,722 per person. Through the end of February, Rocky Mountaineer is offering discounts up to $825 per couple on select trips departing in the coming months. Find details on all the packages and the SilverLeaf Plus upgrades here.