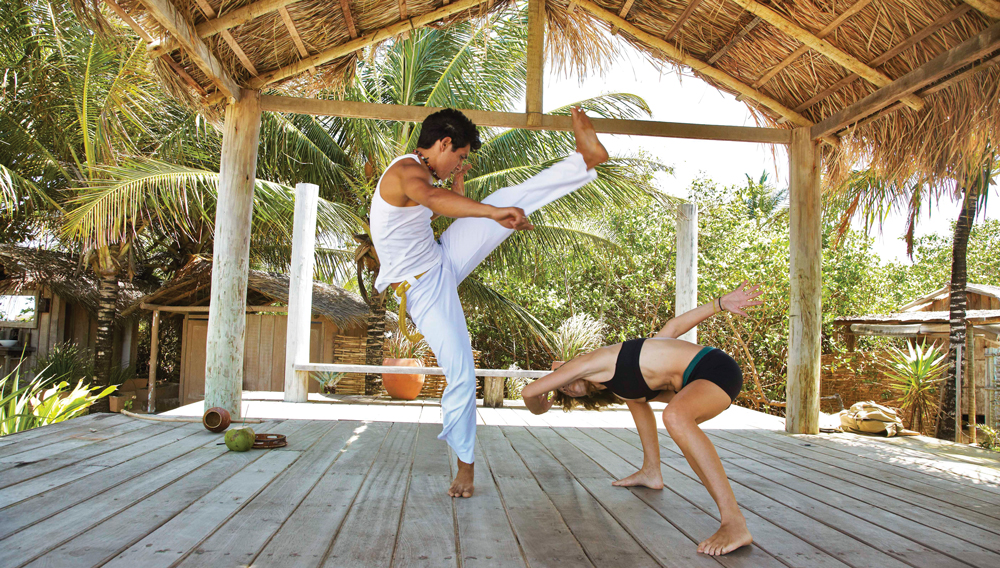 A Brazilian beach resort woos guests into the friendly world of capoeira.

When the one-string berimbau finds a rhythm, the roda comes alive. Players stand in a circle, singing and clapping as the pandeiro (tambourine) and atabaque (conga drum) join in. Two boys crouch in front of the musicians, shake hands, and cartwheel into the center to begin their jogo (game). They lunge and kick without touching, in rhythmic reaction to one another. Minutes later, a young woman and a brawny man twice her age move into the center as the boys exit and rejoin the circle.

“I don’t know any other sport where it’s normal for a small girl to play a tall, muscular Rastafarian,” says Wilbert Das, the Dutch co-owner of Uxua Casa Hotel & Spa in the Brazilian coastal village of Trancoso. “The players are very social and easy to connect with, especially here in Bahia.”

Bahia is often credited as the birthplace of capoeira, Brazil’s dance-like martial art that dates back to the early 17th century. In 2009, Das, the former creative director of the Italian clothing company Diesel, moved to the northeastern Brazilian state to open his beach resort, where everything from the lanterns hanging from the tamarind trees to the colorful textiles in the 11 villas is the handiwork of the village’s flourishing community of artisans. An immediate adopter of the region’s culture, Das also funded a capoeira school where locals can practice for free. Last year, he launched a new capoeira experience at Uxua aimed at introducing his guests to the graceful sport.

Uxua’s three- and five-night capoeira packages (priced from $3,000 per person) include daily classes with a private instructor in the resort’s studio or among local players at Das’s school. Daily massages at Uxua’s spa, lunch at its beach lounge, and public classes at Trancoso’s Casa da Cultura are also included.

My introduction to capoeira begins with an hour-long session at Uxua, where my instructor, Diney Lima, and his son Paulinho teach me the basic jogo moves: a rocking lunge, a kick, and a duck. Paulinho adjusts my arm as I swing it over my face to block a would-be opponent. The young Brazilian speaks no English—and I no Portuguese—but we manage to communicate through gestures, and after just a few exchanges, my heart is pounding and my thighs are burning. Fortunately, a water break leads to an impromptu jam session when Diney picks up his berimbau and passes me the pandeiro.

The next night, I arrive at Trancoso’s capoeira school to find a proper roda under way. The players gesture for me to stand among them, swaying from side to side while watching jogo after jogo. First come two players in low-waisted white pants who spar with such force that their braided belts whip through the air. Next, an attractive woman and her handsome opponent flirt their way through a dance. It is suddenly my turn when a young man with a crew-cut motions for me to join him in the circle. Following his rhythm, I duck down as he swings his leg over my head. Then he takes a defensive position and I give a kick. As we move, every muscle in my body engages and my heart rate quickens, but the pounding beat of the atabaque urges me on, fueling the thrill of my very first jogo.