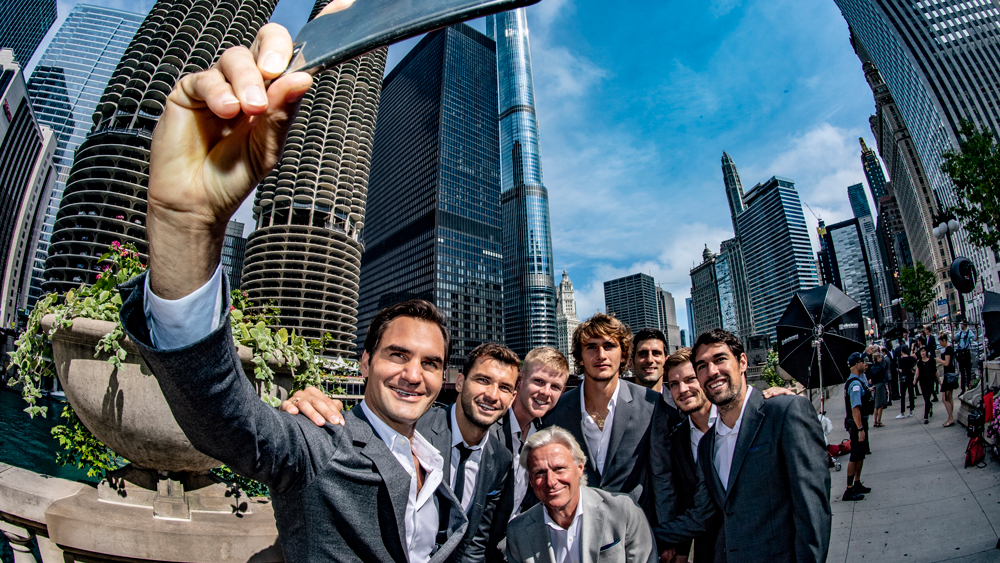 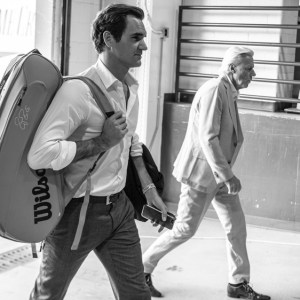 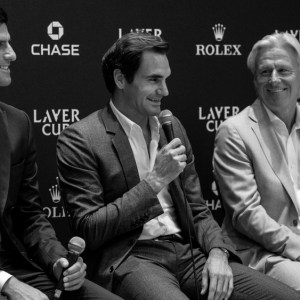 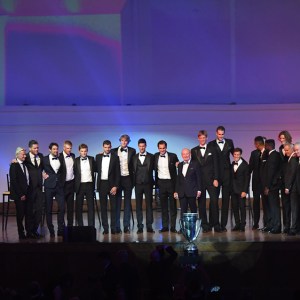 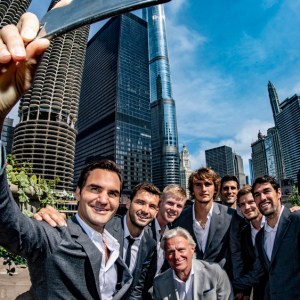 Roger Federer hosted the opening gala for the Laver Cup—his personal tennis tournament pitting European players against those from the rest of the world—last night at Chicago’s Navy Pier. The Champagne-fueled event kicked off the start of the second annual competition, which will take place this weekend at the United Center.

Dressed in a slick Gucci tuxedo, Federer sipped Moët & Chandon while socializing with his teammates, which this year include Novak Djokovic (winner of both this year’s U.S. Open and Wimbledon), Grigor Dimitrov, and Alexander Zverev. Also in attendance were the players from Team World, which is captained by retired American player John McEnroe and includes promising young stars like South African Kevin Anderson and American John Isner.

At the beginning of the three-course dinner, the tournament’s players gathered on stage in front of a crowd of hundreds of well-heeled tennis fans, all clamoring for a picture with their heroes. Tennis greats like Chrissie Evert and Rod Laver, for whom the tournament is named, were also in the audience. “It’s a hard thing to do,” Federer said of creating the new tournament. “Tennis doesn’t change, but here we are with a trophy . . . We will leave one another inspired and motivated.”

McEnroe, Federer’s competitor for the weekend, publicly agreed. “Anybody who saw this or watched it last year saw how incredible it was, and this year we are hoping for better. I’ve been around the sport for 40 years, and it would be tough to come up with anything better.”

But last night’s opulent affair was just the start. Here, tennis greats—including Federer himself—give Robb Report the inside scoop on what’s to come for this year’s Laver Cup.

How it was conceived: Federer offers a simple explanation for how he came up with this tournament—he was bored. “We have a lot of time in between rides from hotels to tournaments, and I was talking to my agent and I said I thought it would be nice to honor the legends in some shape or form,” he said. He convinced Rolex to become a founding partner (Federer is a brand ambassador), and the Laver Cup was born.

What to look out for: Federer and Djokovic are playing together in the doubles tournament. Two of the best players of all time, they’ve never been on the same side of the court. “It’s going to be very special for both of us,” said Federer. “We have to see who is going to dominate.”

“There is the opportunity that it will be tricky, and there is the chance it will be incredible,” said McEnroe. “You’re talking about two of the four or five best players who ever played tennis on the same court. From that standpoint alone it will be truly interesting to check it out.”

How it is scored: Every player who wins in a singles or doubles competition amasses points for his team, and they are added up at the end. As the tournament progresses, points become more valuable: Day one victories are worth one point, day two victories are worth two points, etc. “That’s what makes the event unique,” said Patrick McEnroe, a co-captain of Team World along with his brother. “There is a lot of strategy about who plays when, and it makes it more fun.” Do you save your best players for later days when the wins are worth more? Or do you put them at the beginning to get an early lead?

Where to watch: If you’re going to watch history being made, you have to do it in style. Head to the Rocket Club, the United Cecnter’s VIP suit, which serves unlimited Moët & Chandon and offers access to seats that are so close to the action, you might just have to dodge a stray tennis ball or two.