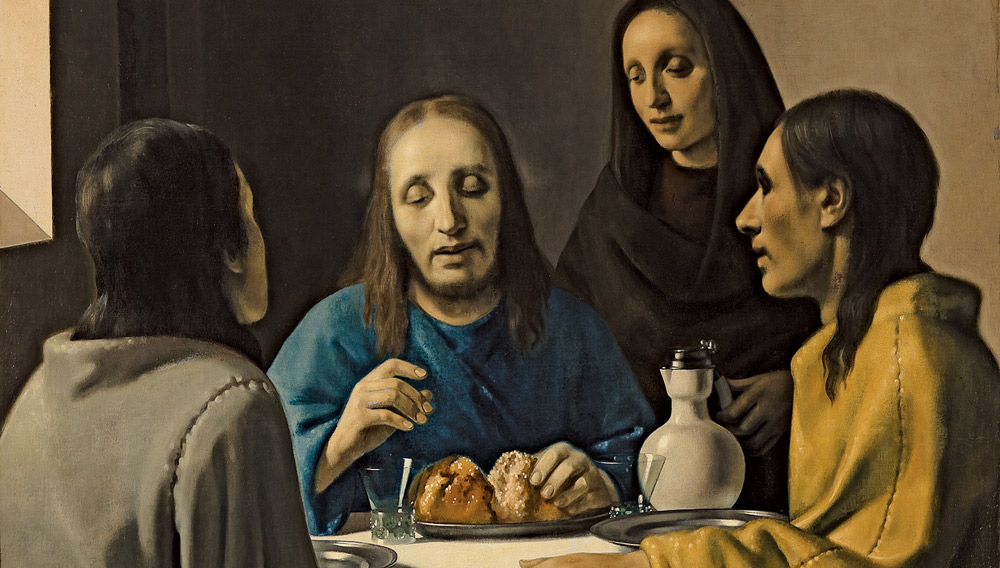 Between the artist and the collector there sometimes exists a special intimacy—a sympathy of spirit that entwines fates. Such was the case with an obscure 20th-century Dutch painter and his most famous admirer, whose patronage secured the virtuoso’s place in history.

Born in the Netherlands in 1889, Henricus van Meegeren developed a lifelong fascination with old-master pictures thanks to his mentor, the painter and instructor Bartus Korteling. Indeed, while studying in the Hague, Van Meegeren won a medal for executing an interior rendering of Rotterdam’s Church of Saint Lawrence in a curiously 17th-century style—a tribute to the influence of Korteling, who considered such modern artistic movements as impressionism and cubism depraved. On graduating, the ambitious Van Meegeren accepted a teaching position, and in 1917 he presented the first exhibition of his work. Yet despite praising his technical skill, critics rejected his work as largely derivative.

Disappointment gnawed at Van Meegeren, who determined to ruin the reputations of these experts. Schooled by Korteling in centuries-old methods of mixing pigments, he practiced making diligent copies of works by the most revered Dutch masters, including Frans Hals and Johannes Vermeer. He discovered that he could carefully remove the layers of paint from unimportant pictures of the 1600s, leaving a blank yet authentic canvas on which to practice his own dark art. Aware that many academics believed that Vermeer had traveled to Italy, Van Meegeren resolved to manufacture an “early” Vermeer with a religious subject.

In 1937, a lawyer presented The Supper at Emmaus (pictured) for evaluation by the foremost authority on Vermeer at the time, Abraham Bredius. Not only did the picture support prevailing theory, thereby softening suspicions, but its departures from canon were readily explained as youthful experimentation. Bredius’s published verdict, to Van Meegeren’s delight, rapturously proclaimed the work “the masterpiece of Johannes Vermeer of Delft.”

Although Van Meegeren initially intended to discredit Bredius publicly, the painter had second thoughts when a consortium of wealthy benefactors paid a sum equivalent to more than $5 million to acquire his fake Vermeer for a Rotterdam museum. He thus kept silent and used this unexpected windfall to set himself up in a luxurious villa on the French Riviera, where, amid palms fanned by scented Mediterranean breezes, he pursued his new career as forger in comfort.

When the impending German invasion of France forced him to abandon his seaside idyll, he packed up his brushes and oils and moved to Amsterdam. There he continued to discreetly peddle his seemingly precious wares, even during the German occupation of the Netherlands; in fact, the Nazis proved eager marks for his inventive swindles. Under the supervision of Vice-Chancellor Hermann Göring—a self-proclaimed connoisseur of fine art with a penchant for wearing theatrical uniforms accented with jeweled decorations—the Germans systematically plundered the capitals they conquered, removing trainloads of art treasures, many of which found their way to the Carinhall estate outside Berlin that served as Göring’s private museum. A Vermeer to crown his collection, however, eluded him—until, that is, he persuaded the Dutch dealer Alois Miedl, with whom Van Meegeren had dealings, to part with an “early” example of the artist’s oeuvre, Christ and the Woman Taken in Adultery. So smitten was Göring that he happily traded some 150 other priceless paintings for this single canvas.

Less than two years later, in 1945, Van Meegeren and his admirer both found themselves on trial. At Nuremberg, Göring, who faced charges of mass murder, glibly admitted his thefts: “During war,” he said, “everyone loots a little bit.” Yet Van Meegeren, to whom the Allies traced Göring’s prized Vermeer, proclaimed himself innocent—at least of selling cultural treasures to the enemy. To save himself from the consequences of this higher crime, he confessed to the lesser one and, to allay the doubts, painted a new Vermeer for the court. His conviction as a forger was a personal triumph for the unknown Dutchman, who, as one biographer notes, was “in reality, one of the most [commercially] successful artists alive in Europe.” The revelation, however, had quite the opposite effect on the incredulous Göring. According to one official, on hearing the news, he “looked as if for the first time he had discovered there was evil in the world.”