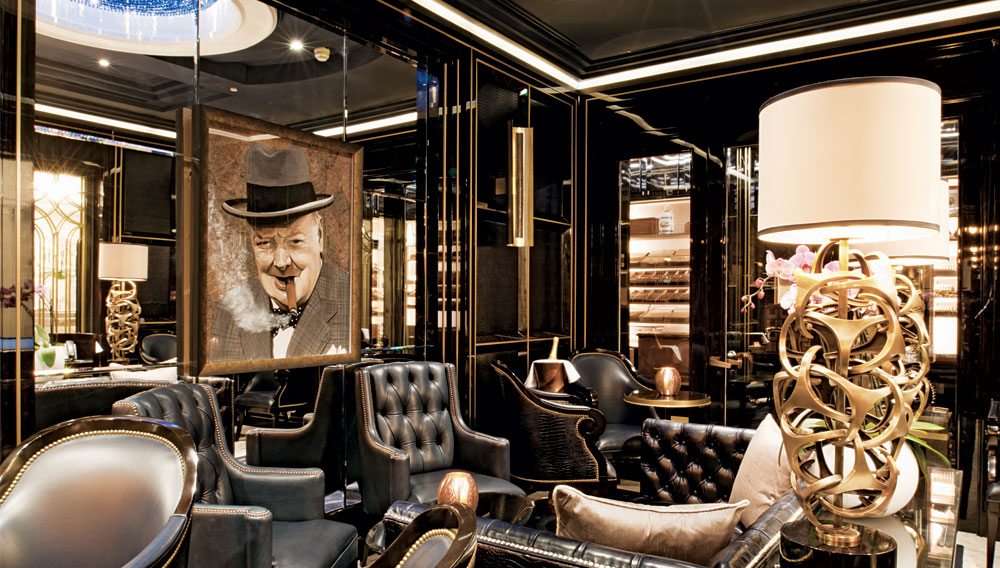 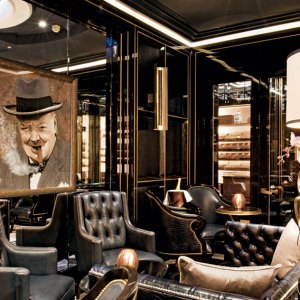 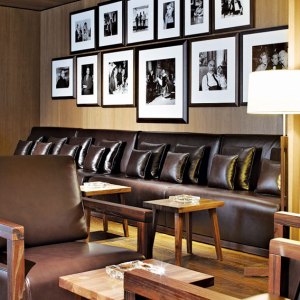 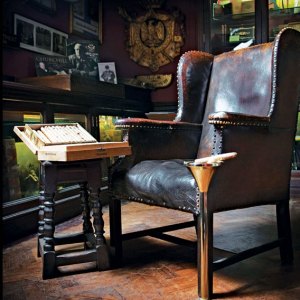 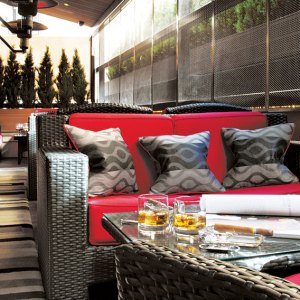 Beneath the awning at the entrance to the Wellesley, a new boutique hotel built on the original site of the Hyde Park Corner tube station, there are still vestiges of the old red subway tiles, and it is not difficult to imagine the many cigars puffed by waiting passengers so many decades ago. Just off the lobby, inside the hotel’s stylish cigar lounge, the sweet, thick smoke of well-aged Havana leaf proves that cigars are still very much a part of the city’s present-day culture.

Just seven years after “Black Sunday”—the day on which Parliament enacted a ban on indoor smoking—London has improbably evolved into a haven for cigar connoisseurs of all tastes. It is possible to visit some of the city’s oldest tobacconists, in shops that serve as portals to the Victorian era, or to soak in the ambience at a cutting-edge cigar lounge in a fashionable hotel. The law provides just enough flexibility for both to carry on: Tobacconists are allowed to have patrons “sample” their smokes on the premises, while the hotels have cleverly created legal outdoor smoking areas that are as inviting and well designed as any indoor space. Indeed, the city that invented the cigar lounge in the 19th century is reinventing it in the 21st.

We smoked and sipped our way through London’s most elegant cigar terraces and shops, from Oscar Wilde’s old haunt on St. James’s Street to a clubby terrace that serves a daiquiri infused with a Montecristo No. 4 to a luxurious lounge boasting the world’s largest selection of rare Cuban cigars. Most have a minimum charge of about $40 per person, which is approximately the price of one Cuban cigar. Any of these establishments would inspire connoisseurs to eagerly light up in a city where the historic smoke of a good cigar will not dissipate.

This art deco–style hotel located in Knightsbridge, which opened in 2012, is paradise for cigar connoisseurs. The lounge’s walk-in humidor is lined with a marble floor inlaid with a map of Cuba; a gold star marks the Vuelta Abajo, Cuba’s premier tobacco region. Its shelves display what is most likely the largest selection of rare Cuban cigars in the world, from a $1,320 Flor de Cano Diademas to a 2005 Cohiba Behike 40th Anniversary for $6,500.

On the outdoor terrace (although one would hardly know it is outdoors), the fanciful tables and upholstered chairs are warmed by both hanging heaters and heated floors. The chairs have been designed with armrests at the same height as the tables, to make sitting and smoking a cigar almost effortless. Custom-made copper cigar ashtrays, deep enough to prevent ashes from blowing away, are close at hand. The outstanding spirits collection in the adjacent Crystal Bar includes selections such as a 1767 Cognac. Even the hotel’s penthouse suite is outfitted with a 300-cigar humidor, as well as a private balcony and separate ventilation system. “We’re a small hotel, but one thing’s for sure: We’ve got the biggest cigar collection, the best Cognac collection, and the finest whiskey collection in the world,” says Khalid Affara, the Wellesley’s owner. “And if there is someone or something out there that’s better, then we will get something that will be even better than that.”

That attitude explains why Affara, unsatisfied with the superhot flame of most butane cigar lighters, is having a lighter designed exclusively for the hotel by S.T. Dupont. And not surprisingly, the Wellesley has its own Cuban cigar, made with the finest tobaccos rolled by Cuba’s top torcedors. Full flavored yet mellow, it is an ideal match for the Wellesley’s cedar- and honey-tinged private-label Hermitage 1975 Chez Richon Grande Champagne Cognac.

The Churchill Bar and Terrace

Although it has its own entrance on Portman Square, this spacious indoor bar and outdoor cigar terrace is best accessed by walking through the Hyatt Regency’s Montagu restaurant and continuing down a short corridor. At the end, one discovers the new Churchill Bar and Terrace with the pleasant surprise of bumping into a rejuvenated old friend. The plush royal-blue couches and soothing neutral woodwork are nothing like the gloomy paneled decor of the hotel’s previous Churchill Bar and Cigar Divan.

The 2012 edition of the lounge is meant to celebrate the young Churchill; bookcases hold family photographs and a curated selection of reading material. The long lava-stone bar serves the Churchill Martini, made with a citrusy craft gin distilled for the bar and, as Churchill preferred, absolutely no vermouth. The humidor is stocked with 28 popular cigar brands, 21 of which are Cuban—including Romeo y Julieta, Churchill’s favorite, plus rarities such as the Cohiba Behike 56—and it is a pleasure to light up on the pillared cigar terrace. Its hedge-lined perimeters and glass-topped tables have the ambience of a country garden, albeit one with heaters overhead and a life-size bronze sculpture of Churchill by Lawrence Holofcener.

The May Fair hotel in the city’s West End takes a speakeasy approach to its Cigar Room: A private dining room just off the hotel’s signature restaurant, Quince, contains a humidor and a clandestine door. Those who venture through it find a stairway with handrails aglow, leading to what used to be an open rooftop. In 2011, the hotel  set about transforming it into a quirky cigar room with the help of one of the city’s leading designers, Graham Cox. The space is filled with soft textures and ethereal pink and purple lighting. Steel mesh forms the walls and a “ceiling” overhead, and gas fireplaces beckon visitors to chairs, basket swings, and curtained daybeds.

The small but impressive bar displays premium spirits such as 1983 Glenlivet French Oak Finish single malt and Le Voyage de Delamain Cognac, while the four-page cigar menu lists brands by strength and includes the Cohiba Behike 52 and the Trinidad Robusto Extra. Cocktails, priced at $33 each, are decidedly cigar friendly. Of particular note is the Montecristo Daiquiri, made with Havana Club rum infused with a Montecristo No. 4 cigar and topped with Perique Tobacco Liqueur.

Robert Lewis began as a tobacco trader in London in 1787. His business merged with James J. Fox Tobacconist in 1947, making this shop the oldest tobacco purveyor in the city. Entering its wood-paneled confines is like stepping back in time, although the large walk-in humidor holds an impressive array of current Havanas, including limited editions made just for the United Kingdom such as the Bolivar Gran Británica. Even Dominican and Nicaraguan cigars can be found here—rarities in London, where Havanas rule. The really oldcigars are discreetly kept in the basement, where some of London’s most illustrious families have stowed their Havanas for generations.

The basement boxes are off-limits, but patrons may visit a small museum downstairs, which includes artifacts such as two boxes of the world’s oldest Havanas (from 1851), a chair that was regularly occupied by Winston Churchill (who had an account here for 64 years), and Oscar Wilde’s unpaid bill (43 pounds, 7 shillings, and 3 pence).

An antique wooden staircase in the main store leads up to a new smoking lounge, a plain but spacious perch overlooking St. James’s Street. Here customers may smoke their just-

purchased cigars and enjoy a dram or two—while the store is not allowed to serve alcoholic beverages, customers may bring their own libations.

Just up the street from James J. Fox is Davidoff of London, a more contemporary but equally rare cigar-smoking oasis. Its long, walk-in humidor is amply stocked with Cuban cigars and the complete Davidoff range from the Dominican Republic. The store’s congenial proprietor, Edward Sahakian, has owned the shop since it opened in 1980 and is well versed on every Cuban cigar and Dominican-made Davidoff he carries, including one exclusive to the Bond Street store: the Davidoff London 25th Anniversary, which was blended by Sahakian and Eladio Diaz in honor of the store’s 25th birthday. Sahakian readily invites customers to pull up a chair, relax, light up, and perhaps sip one of the exclusive single-malt whiskies he also imports. The Sovereign Strathclyde 36 Year Old 1977 would make a fine complement to the underlying sweetness of the 25th Anniversary cigar.

When Bulgari Hotels opened in Knightsbridge in 2012, the amenities included a stylish cigar lounge from Edward Sahakian, of Davidoff of London, and his son Eddie. A gray-carpeted stairway off the main restaurant and bar leads up to this lofty hideaway decorated with sleek leather furniture and black-and-white photography. The humidor is well stocked with cigars from Sahakian’s private collection, including rarities such as a Cuban Davidoff Dom Pérignon and a Cohiba Sublimes Ltd Edition 2004, as well as classics such as the Hoyo de Monterrey Epicure No. 2 and the Romeo y Julieta Churchill. The lounge seats 25 and is managed by Mike Choi, the winner of the 2013 UK Habanos Sommelier Competition. No one is better qualified to offer customers a choice of cedar spill, wooden matches, or butane lighter with which to light their cigars.

Home to the best martini in London (see sidebar), Dukes also offers a small and charming cigar lounge. The St. James’s Place hotel has cleverly converted a patio by surrounding it with latticework and hanging pleated white draperies and an assortment of vintage mirrors and other curiosities. Indoors, a cocktail lounge beckons with three candlelit tables, comfortable couches and armchairs, and an antique display cabinet filled with cut-crystal bar accessories. A modest humidor holds a basic assortment of cigars, including the Montecristo No. 2. Once selections are made, it is off to the garden for a smoke.

Cigars at No. Ten

Located on a residential street in Marylebone, the chic Ten Manchester Street hotel contains one of the city’s top cigar lounges. The clubby indoor tasting room and humidor-lined hallway lead to a comfortable outdoor cigar terrace. The impressive selection of Havanas includes the Partagas 165th Anniversary humidor’s Double Corona 109, which is rarely sold individually. The hotel attracts a regular afternoon and evening clientele of men and women seeking a retreat in which to also enjoy a cocktail or a bite from its modern Italian restaurant, Dieci’s. There is full-service cutting and lighting, and at the hotel’s monthly cigar nights, $75 purchases a Cuban cigar and drinks that complement it. One recent evening, a 12-year-old Marolo Barolo grappa was paired with a Montecristo 520 Limited Edition 2012. It is good fun until 11 pm, when Cigars at No. Ten shuts down in order not to disturb the neighbors.