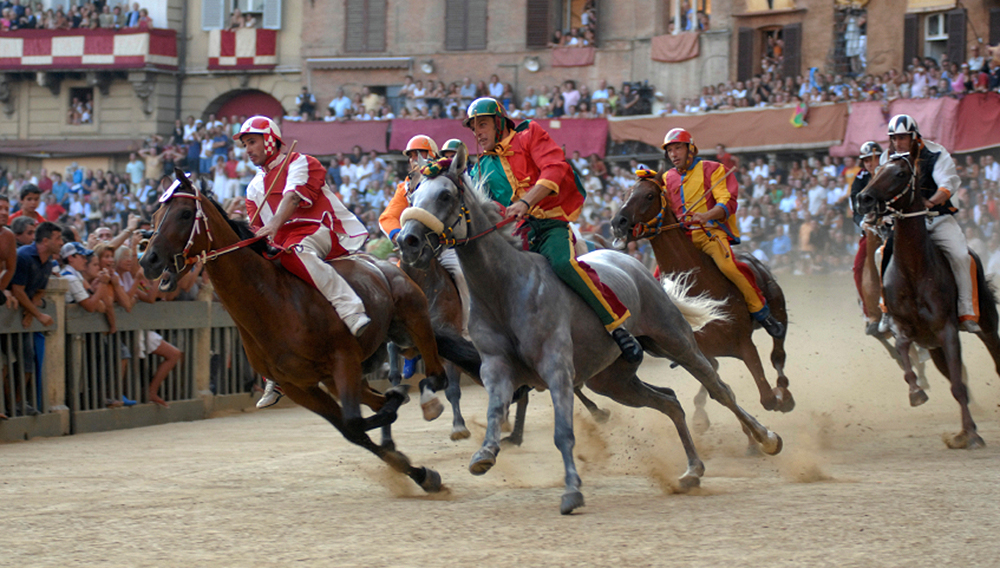 Rosewood Castiglion del Bosco, the elegantly rustic retreat located in a UNESCO World Heritage Site in Tuscany, does not horse around when it comes to providing traditional and authentic Italian culture. The ancient resort features an 800-year-old estate, a medieval church, and a historic village set on 5,000 acres. For the second consecutive year, the Rosewood hotel is going beyond its impressive amenities, which include an onsite winery and a cooking school, by offering an exclusive way to experience one of Italy’s defining events: Il Palio di Siena—a horse race that dates to the Renaissance.

Held twice a year, on July 2 and August 16, in the Tuscan city of Siena, the fiercely competitive cavalcade pits the city’s 17 contrade (teams representing the districts within the medieval city) against each other for pride, bragging rights that culminate in raucous late-night parades, and a large payout for the winning fantino (Italian for jockey)—although there are several counter deals struck in secret to make sure opposing contrade do not win.

The race takes place in Siena’s public square, Piazza del Campo. The cobblestones are copiously covered with dirt, and 10 fantini (contrade not represented participate the next time) on bareback mounts ride the circumference of the shell-shaped piazza with hundreds of spectators crammed shoulder to shoulder in the middle of the course. The contest consists of three free-for-all laps around the makeshift track, which features two dangerous 90-degree turns, and it resembles karate more than the Kentucky Derby. Sportsmanship is spurned as fantini are encouraged to knock each other off using their nerbi (Italian for whips) and nearly any other means necessary—despite the treacherously tight terrain.

But a fallen jockey does not eliminate a contrada. The horse is viewed as the real talent (each contrada brings its horse into church to be blessed before the race), and a horse without its rider can still win as long as it crosses the finish line first. Opposing contrade also encourage and celebrate the crushing defeats of their rivals (whether or not they themselves won) in parties that are sustained for a full month.

Participants of Rosewood’s three-night Palio package (available for both race dates) will be allowed to watch training runs and qualifying trials taking place the day before the race, and will finish the evening with a gourmet dinner in the piazza. For the main event, guests will be seated in a safe (course-side viewing is characteristically rambunctious) and fully catered private palace above the piazza. From the vantage point, guests will have a prime view of the Corteo Storico costume parade, which features percussion performances and the flags and traditional garb of each of the contrade, and all of the horse-powered action. Guests can also experience firsthand the semiannual post-race partying during a private tour of Siena. Pricing starts at $3,028 per person. (rosewoodhotels.com)