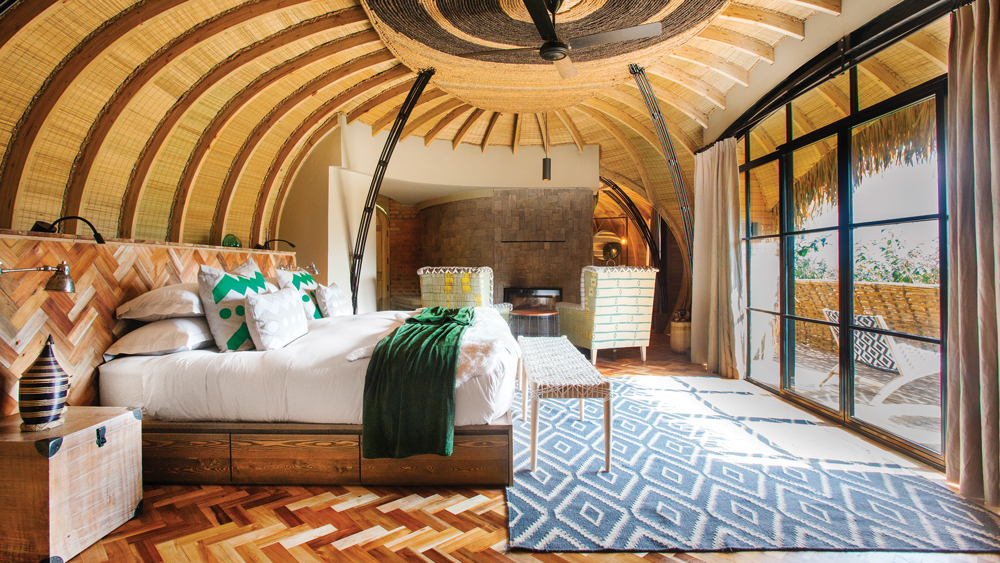 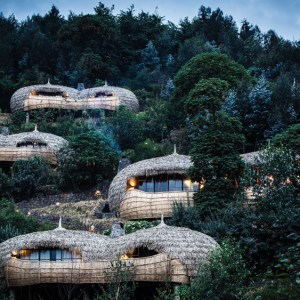 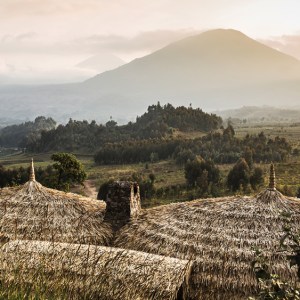 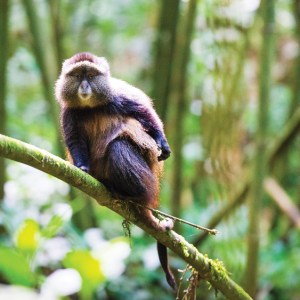 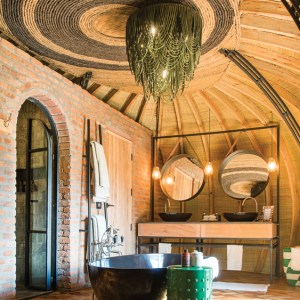 The valley looks like it’s spun from gold. Lush from the season’s rains, the vibrant expanse shimmers in the afternoon sunlight, a secret garden guarded by the majestic Mount Bisoke to the west and tumbling hills to the north. Climbing the emerald peak to the east, though, is the set of unbearably steep stone steps on which I currently find myself standing—and panting. Perhaps it’s the altitude, or all of that unfiltered golden light, that has me gulping for air.

“Every single stone on these steps was carried up by human hands,” says Ingrid Baas, the manager of Rwanda’s new Bisate Lodge (available through Alluring Africa) as she guides me up, up, and up farther still. I nod and give a tight-lipped smile in response—a fatigued gesture that I hope communicates a combination of “wow” and “tell me more.” “Men were carrying hundreds of pounds on their backs up this hill. The physical effort was unbelievable.” I answer with a silent, humble nod and wonder how much farther we have to go.

At last we arrive at the main lodge—and what an arrival it is. The fruits of 9 months of human labor are clear: Bisate is unlike any safari camp I’ve ever seen. The dome-like space bears little resemblance to the traditional tented lodges common throughout sub-Saharan Africa. Gone are the canvas chairs and vintage trunks. In their place are modern low-slung chairs covered in fur throws, sparkling chartreuse chandeliers composed of thousands of tiny bits of glass, and sweeping billowy curves everywhere. One look at the views from the terrace—a panorama over the valley and the mountains and those terraced hills—and I’m breathless all over again.

Indeed, Bisate is worth the effort, both to get there and to build. The six-room lodge is the result of nearly a decade of research and planning by the Botswana-based safari outfitter Wilderness. Set on the edge of Volcanoes National Park—where Dian Fossey famously carried out her research of the region’s primates—the camp is an aesthetic masterpiece as well as a magnum opus of sorts for Wilderness. “I’ve never walked away from a project feeling so rewarded,” says the company’s CEO, Keith Vincent. “Every part of it has blown me away, from the efforts the local population put into making it happen to the sense of pride it has brought to the surrounding villages.” That the hillside camp was constructed almost entirely by human power is nothing short of a miracle.

Spend a bit of time in Rwanda and you’ll find that almost nothing comes easy for travelers here—but it’s always worth the effort in the end. I arrived in the capital of Kigali two days earlier to discover a modern metropolis booming with progress. Hardly the mere pre-safari pit stop I had envisioned, the city is a testament to the strides this country has made in the quarter-century since a tragic genocide tore it apart. The atrocity—a 100-day slaughter that ended with nearly 1 million dead at the hands of their own neighbors, friends, and families—is still clear in the memory of every Rwandan above a certain age. And yet a collective optimism about the country’s future clearly prevails.

“The president has given us a new hope,” says my driver, Emmanuel Gasana, as we zip past the cutting-edge Kigali Convention Centre, an all-glass orb-like structure that was completed in 2016. “He’s making sure everyone gets an education, and creating jobs for people who have never worked before. And he’s bringing investors into the country to create new opportunities and wealth.”

Rwanda is still a work in progress—for instance, last August’s reelection of President Paul Kagame with 99 percent of the vote raised questions of political oppression—but recent improvements are readily apparent. We pass a pristine shopping center and an ultramodern hotel wrapped in colorful ribbons of metal before turning a corner flanked by billboards showing a pair of shimmering residential towers. A new airport, the dramatic cantilevering Kigali Art & Culture Centre, and Norman Foster’s first-of-its-kind “droneport” (a hub for cargo delivered via drone) are also in the works.

Kagame is leading his country into an unprecedented tourism boom, too. The Virunga Mountains have long held allure for travelers, offering the rare opportunity to see the same endangered mountain gorillas and other primates that Fossey studied during the 1960s and ’70s. But the Rwandan government has a broader ambition, one that will lure travelers beyond the Virungas. “There’s so much more to Rwanda than simply cherry-picking the gorilla-tracking experience,” Vincent says. “The long-term goal is to open up new destinations, too.”

To that end, Wilderness is planning to open its second Rwandan camp in the northeastern Akagera National Park, which offers the country’s only Big Five safari experience. In the southwestern Nyungwe Forest National Park—home to chimpanzees and monkeys—the luxury-resort brand One&Only opened a lodge last year.

Bisate’s thatched villas are burrowed along a verdant hill in the shadows of Mount Bisoke.  Photo: David Crookes

Luxury travelers are clearly a focus for Rwanda, particularly in the Virungas, where the government recently doubled the price of gorilla-tracking permits to ensure a more exclusive experience than that of neighboring Uganda. In addition to Wilderness’s Bisate, visitors to the region will soon be able to choose from lodges by both One&Only—which is scheduled to unveil its reinvention of the historic Gorilla’s Nest later this year—and Singita. For now, however, the talk of Rwanda is Wilderness’s rarefied new retreat in the heart of the Virungas.

With Gasana at the wheel, we set out on the 3-hour drive from Kigali. It’s only a matter of minutes before the city streets give way to winding mountain roads, and as we weave past sloping fields lined row after row with Irish potatoes and wide expanses of wispy golden wheat, rural Rwanda comes alive. Gasana, who lost his mother in the genocide, tells me that the mud farmhouses to our right remind him of his youth, when he’d visit his grandmother in the countryside.

Two hours later, Bisate comes into view, its woven structures sprouting from the hillside like giant birds’ nests wedged into a mound of ferns. Baas is waiting to show me up the steep stone steps to my room, which turns out to be a fantastical cross between an enormous woven basket and a geodesic dome. Designed by Garreth Kriel of the South African firm Nicholas Plewman Architects, the thatched villa is a reinterpretation of the old king’s palace of Nyanza, once the seat of the Rwandan monarchy. But this modern version brims with chic details: In the bathroom, the deep-soaking tub looks as if it were carved from slick onyx. Above it, an elegant chandelier is composed of tiny strips of leather. In the bedroom, colorful patterns covering the wingback chairs and pillows are contemporized versions of traditional kitenge fabrics. And the bed is the most comfortable I’ve slept in since arriving in Rwanda.

At over 8,500 feet, I’m naturally a little bit lightheaded, but the views from my private terrace are downright dizzying. I step out into the sun to find a pair of black-and-white rattan chairs that have been positioned in such a way that when I sit down, I find myself quite nearly face to saw-toothed face with Mount Bisoke. The floating effect is utterly magical. You don’t go on safari to spend all of your time in your room, but my, is it tempting.

“Mmmmmm,” Patrick Magirirane growls. “Muhhh-mmmmm.” Our group of eight trekkers is clinging to the side of Mount Karisimbi, catching our breath, and getting a crash course in gorilla-speak from our guide. Of the 20-plus vocalizations used by gorillas, the one Magirirane has just taught us roughly translates to “Hello. We come in peace.”

It is 10:30 am and we’ve been ascending this trail-less incline for more than an hour. The air is getting thinner and thinner—or maybe it’s the careful work of treading through an indecipherable grid of bamboo that has me feeling dazed. Everywhere, mossy reeds shoot this way and that; it’s like wading through a giant game of pick-up sticks. At the front of our group a trio of gorilla trackers slashes at the maze with their machetes, and we inch forward, with nettles latching onto our pant legs and tangles of lianas grabbing at our ankles as if trying to hold us back.

When we reach a muddy depression bridged by a fallen tree trunk, my porter—a sturdy woman named Pauline whom I hired only to carry my backpack filled with cameras and lenses—reaches for my hand. I timidly take it and allow her to hoist me over the impasse. Minutes later she reaches for me again, this time to help me navigate a slippery crevasse. A few minutes after that, I hit my head on a low tree branch. I swallow my pride, reach for Pauline’s hand, and decide not to let go until we reach less hazardous terrain.

Then, suddenly, we’ve arrived. Just beyond the thicket of bamboo ahead, Magirirane tells us, is Pablo’s group, one of the gorilla families Fossey habituated during her 18 years among these mountains. One by one we cross the threshold, emerging from the dark forest into a brilliant sloping meadow. And there, lounging in the midmorning sun like a Bacchus feasting on grapes, is Gicurasi, the group’s massive silverback of 400-plus pounds, munching on wild celery.

Anyone who has encountered gorillas in the wild will emphatically remind you that we share 98 percent of our DNA with the black-furred beasts. This fact carries significantly more weight when you’re actually standing in front of a silverback. Gicurasi’s nimble fingers—and his fingernails—look so human, I can’t help but glance down at my own for the sake of comparison. When he finishes his snack, he rolls over onto his stomach and rests his chin in his hands, as if posing for a pin-up calendar. And when a rowdy adolescent tumbles past, plucking a shoot of celery for himself, Gicurasi slowly lumbers away, every bit the grumpy dad in search of just one moment of peace.

For their part, the gorillas meet our awe with impassive disinterest. As we navigate the meadow around them, gracelessly tripping over the knotted vines that cover the ground, they go about their business utterly unmoved. We coo over a 3-week-old baby, laughing at the wild mess of hair atop his head. We chuckle when a blackback—the group’s second eldest male—groggily stumbles out of the brush like a hungover frat boy. And we gasp when a rowdy juvenile cartwheels into the middle of the clearing, nearly knocking over one of his human intruders. Meanwhile, they doze in and out of sleep, pick gnats off each other, and occasionally glance in our direction and let out a halfhearted mmmmm.

All too soon, our time with Pablo’s group comes to an end, and Magirirane leads us back into the forest where Pauline waits with my backpack. The long trek back down Karisimbi is still ahead. The stabbing nettles and the trenches of mud and the mess of bamboo are all waiting to be navigated once again. But however arduous the journey home, the effort will be worth it.