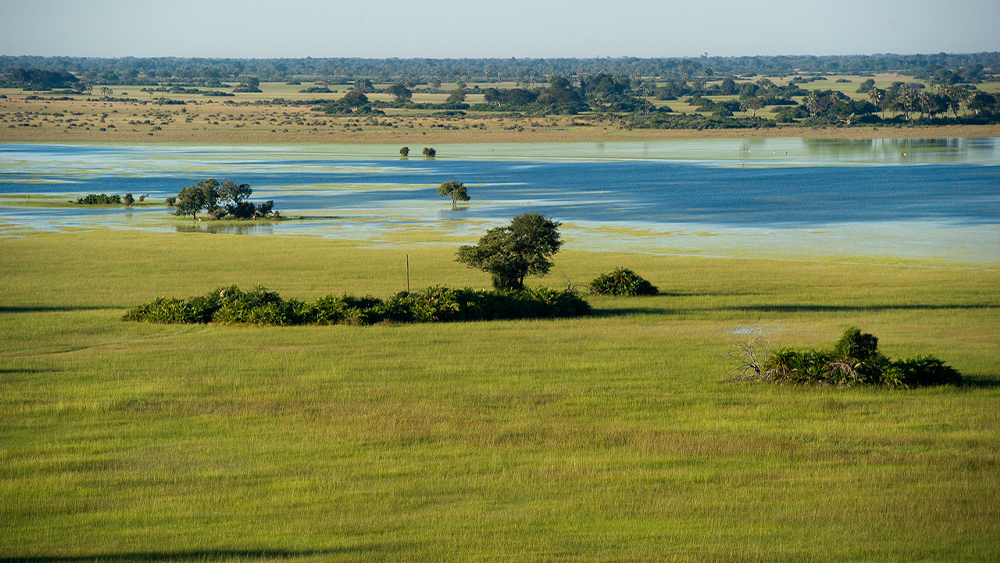 It’s the smells that linger. The faint, elusive scent of a nighttime water lily, or the acrid punch of fresh dung. The aftermath of morning rains that deeds a damp freshness to the air, or soothing wafts of wild sage as the heat of the day eases. The African bush in summer’s wet season, which stretches roughly from November to March in the south of the continent, fires every sense, but most of all, smell. It’s a drastically different experience from a visit during the arid heights of winter, July or August perhaps.

Most in the industry tout its appeal pragmatically: cost. Rechristened “green season,” it’s much cheaper to visit over this period thanks to the ever-present threat of rain. It may be true that skies will likely thunder sometimes, but it’s a mistake to think of a wet-season safari as a cheapskate’s choice or a lesser experience. Instead, it’s safari lovers’ time to sneak onto the continent, a period whose appeal only seasoned insiders recognize. In green season, visitors can experience a version of the bush that bucket-listers, checking off that one-time trip in July, never will.

“Wet season is the best time to be out in the bush,” says Alexander Mavros, scion of the jewelry-making dynasty from Zimbabwe which now runs a namesake luxury safari outfit, “If it’s not going to be your only trip to Africa, you should come now. It’s a time of rejuvenation that makes you appreciate it more, when nature has this joyful energy.”

He’s right. In the bush, green season is celebration, dry season desperation. If dry season during the northern summer were a movie, it would be a Tarantino-esque bloodfest: the land is hostile with little nutrition, and water is scarce. Animals are desperate: Hungry and thirsty, they’re ready to do anything, predators primed for brutal kills. Meanwhile, the African bush in wet season would be a romcom romp directed by Richard Curtis—Love Actually in the veldt. Now, the bush is full of babies, born just when food is at its most plentiful. There are young antelopes, of course, but also zebras—foals are concealed amid the herd, as their legs reach adult length soon after birth, allowing them to stand behind an adult or two, unobserved. Young lion cubs are plentiful, and small elephants huddle by their mothers, who bristle preemptively at the sound of a jeep.

Fauns and other baby animals are a common sight during the wet season.  Wilderness Safaris

In areas where water safaris are possible, levels will be usefully high, as in Botswana’s Okavango Delta, where visitors can ditch noisy, bumpy four by fours and scull over the surface in mekoros, a punt-like canoe used for fishing here, or perhaps cover longer distances in motorboats. Come dry season, what water remains is mostly lifeless, as the lilies which bloom in the water like weeds are quickly gobbled up by elephants, a tasty snack when the bush offers little. But in wet season, vast surfaces like the basin near the camp of Duma Tau in Linyanti are covered in blossoms, like nature’s confetti—half the lilies opening in daytime, the others blooming as the sun sets. Mavros says that the lushness of greenery now reminds visitors that there’s more to safari than spotting the Big Five. Think insects, flowers, plants and birds—again, they flock here in greater numbers in the local summer.

Of course, that lush greenery makes it easier for animals to seek camouflage—yet conversely, they can be easier to track. Lions and leopards, like any house cat, are leery of water, and tend to avoid wet grasses, which soften their claws. Instead, they’ll prowl along dirt roads, leaving fresh prints as they do. Nightly rains wash clean those paths, eraser board-style, so you can be sure the cats were recently nearby, too. “The bush is thicker, but what you do see makes you appreciate the animals more,” Mavros adds, noting too that the dust clouds which wreathe jeeps as they stop in winter aren’t a problem after morning rains, either.

When the heavens open, as they might do once or two a day for brief, torrential downpours, those cats take shelter as best they can. Lions huddling almost nervously in a group against the pelting rainstorm on the Matetsi reserve in Zimbabwe shows a startlingly different side to the apex predators. It’s worthwhile heading to Zimbabwe’s world wonder attraction, Victoria Falls, in wet season, too: The cataracts are at their most thunderous and overflowing, and so you’re more likely to score a glimpse of a little rainbow forming around them as the sun beats down.

Safaris in enjoy the lush, verdant landscapes during the wet season.  Singita

Mavros says that nothing beats the skies in rainy season. “These beautiful cumulonimbus clouds go purple and black, and all hell breaks loose. And it’s juxtaposed with this brilliant bright blue sky, such a tapestry of color,” he says. Looking out over the horizons in the Okavango Delta, from the terrace at a lodge like Best of the Best winner Xigera, those clouds act like bush television, rumbling noisily in the distance and sparking with lightning, Weird Science-style, as they belch out rain.

Green season isn’t for everyone, of course, but it’s far from simply the choice of budget-minded visitors. “You’ve got to be in the right frame of mind for it, to be open to new experiences,” Mavros notes, “But the rainy season is when you know who the ultimate power is: mother nature.”