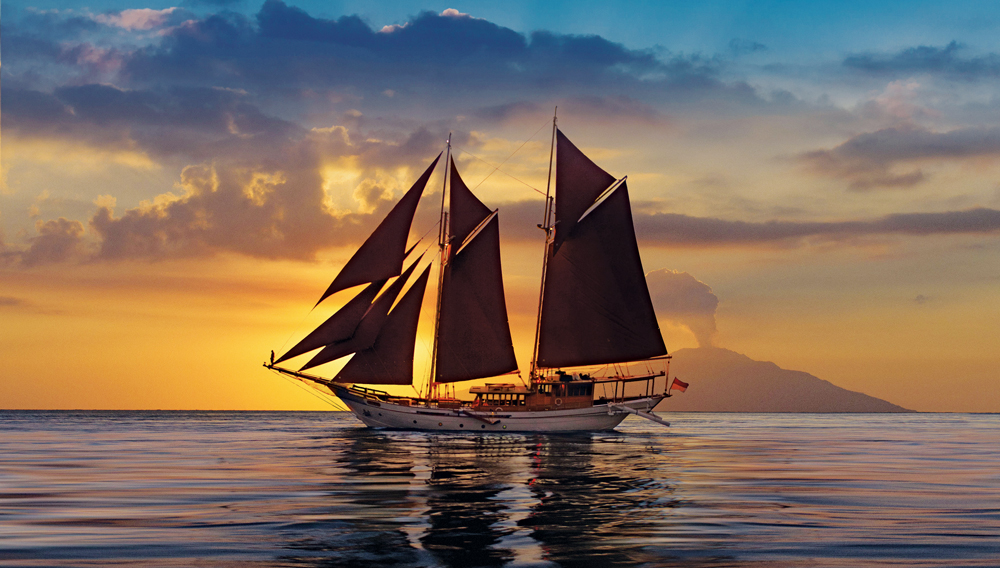 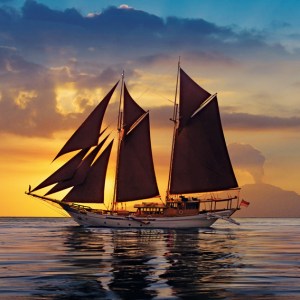 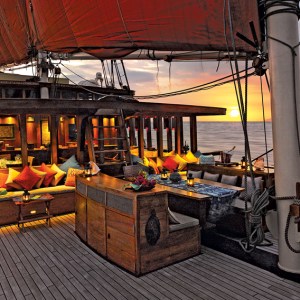 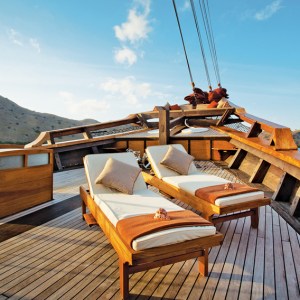 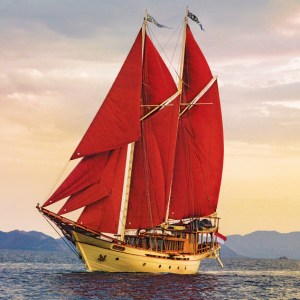 I am standing on the edge of Batu Tara, an isolated volcano that rises straight out of the Flores Sea in Indonesia’s Lesser Sunda Islands, when I feel the first rumble. “Scott!” a voice cries out behind me. “Get on the boat!”

One hundred feet offshore, Patti Seery—my guide and the owner of the Indonesia-based sailing company Silolona Sojourns—is frantically waving me back aboard a tender to return to Si Datu Bua. I dive into the water as boulders and molten lava cascade down Batu Tara’s slope, narrowly missing me before sizzling into the sea. Just as I reach the yacht, another explosion sends a trio of rocks—each nearly the size of a Volkswagen Beetle—soaring through the air.

“Go, go, go!” Seery directs the captain once I am safely aboard. We speed away, leaving a huge cloud of ash and incandescent red rocks spewing into the air behind us. Back on the yacht, looking aft at Batu Tara’s fury, my heart pounds not from fear but from exhilaration. “Welcome to the Ring of Fire!” Seery says, as if reading my mind. “I told you there were a lot more exciting things than dragons waiting for you here.”

Indeed, a sail through Indonesia with Silolona Sojourns need never be short on thrills. The company’s two yachts—both modern interpretations of the traditional phinisi sailing boats once used by spice traders in the region—are available for custom charters throughout this country of more than 17,000 islands. The voyages can be as leisurely or as adventurous as one desires, though the bounty of pursuits—kayaking through aquatic jungles, scuba diving along coral reefs alive with seahorses and cuttlefish, island-hopping to visit pristine beaches and traditional villages—tempts most passengers toward the latter. One of the more popular, and notorious, adventures is a visit to see the Komodo monitors, the dragons to which Seery refers, found some 300 miles west of Batu Tara.

It was on the island of Komodo where I first met Seery 8 years ago. The U.S. expat had been plying Indonesia’s waters since the launch of her first yacht, Silolona, in 2004. I joined her in the fishing village of Labuan Bajo for a sailing expedition that would start with a trip to see some of the roughly 2,500 dragons living on Komodo and its neighboring isles.

The world’s largest lizard, the Komodo dragon can reach up to 10 feet long and weigh as much as 300 pounds. On my encounter with the dragons in 2007, they slithered freely among the tourists at Komodo National Park. They appeared docile—harmless, even—while sunning themselves on the pink-sand beach, and I could not help but reach out and attempt to touch the leathery skin of a particularly lazy specimen nearby. Wisdom imparted by a park ranger, however, nudged my hands into my pockets: Komodo dragons can run up to 14 mph, they can smell blood from 6 miles away, and they carry more than 50 strains of deadly bacteria in their bite.

Dragons are not on the itinerary for my second sojourn with Seery, who is leading me this time through the Alor, Flores, and Lembata islands—a journey that requires nearly 2 weeks if combined with Komodo, but for us will take just 4 days. (Silolona’s two ships can also be chartered for itineraries through Indonesia’s Raja Ampat region, as well as in Borneo, Thailand, Myanmar, Malaysia, and the Andaman Islands.)

Following our narrow escape, Seery and I settle in for a long calm after the storm: a 13-hour sail to the island of Lembata. As I scrub the volcanic ash off my arms and face in my stateroom, however, I sense no threat of cabin fever on Si Datu Bua. Seery enlisted a small army of Sulawesi boatbuilders to handcraft every inch of the 131-foot vessel, from the ironwood paneling sourced from the jungles of Borneo to the bright-red sails. Launched in 2012, the ship includes three suites, a lounge, and a dining room, all of which are adorned with Indonesian textiles and artifacts that Seery—a former art historian for the Smithsonian—has collected around the country over the last 30 years.

We arrive at sunrise the next morning on the rocky coast of Lembata, where the village of Lamalera appears frozen in time. A crash of waves hurls us ashore, and Seery and I disembark to be greeted by a group of villagers. The last legal subsistence whale hunters in the country, these men, with their sun-wrinkled faces and thin, muscular arms, employ the same methods their ancestors used some 600 years ago. All around them is evidence of their life’s work: whale teeth, bottles filled with whale oil, and blubber stretched across colorful sarongs.

Noticing my interest in his collection of products, a village elder holding a translated paperback of Rhonda Byrne’s The Secret implores me to sample his oil. The liquid, which I learn is the drippings from a sperm whale’s heart, is good for my health and will make me strong, he says. I comply, using a whale’s tooth as a shot glass. The viscous swig overwhelms my senses with a fishy odor, and as the liquid passes my lips, I gag—much to my host’s delight.

Assured of my health and strength, I join a group of villagers who are preparing for the day’s hunt. Similar to phinisi boats, the villagers’ watercraft are made of wood, but they look more like outrigger canoes than mighty sailing ships and are topped with simple sails fashioned from interwoven palm leaves. I suspect that these small boats are the reason why so few whales are caught—an average of just six per season, in fact—which may explain why the Indonesian government still allows the village to hunt at all.

As we roll the boats on logs out to sea, I am relieved to learn that we are in the midst of the off-season. Whales migrate through the area only six months per year, so our outing today will be purely for practice. Still, the ceremony of the hunt is a powerful rite of its own, with rowers chanting as their oars cut through the waves and harpooners balancing carefully at the end of the bow’s plank. Suddenly, mimicking the moment of discovery, the men spring up as if on a diving board and leap into the water with their 13-foot bamboo poles affixed with rusty harpoon heads at the ready. The hunt, I learn, is a test of endurance, as a whale may lead a chase of up to 6 hours.

Our drill is fortunately an abbreviated version of the real thing, and I soon return to Si Datu Bua. That night, I sit under a blanket of stars on the phinisi’s observation deck as we head to our final port of call, Maumere. Famished from a day of chasing imaginary whales, I dig into an Indonesian-Dutch rice dish that is indigenous to the tiny islands just north of us and start planning with Seery my next adventure in the Ring of Fire.