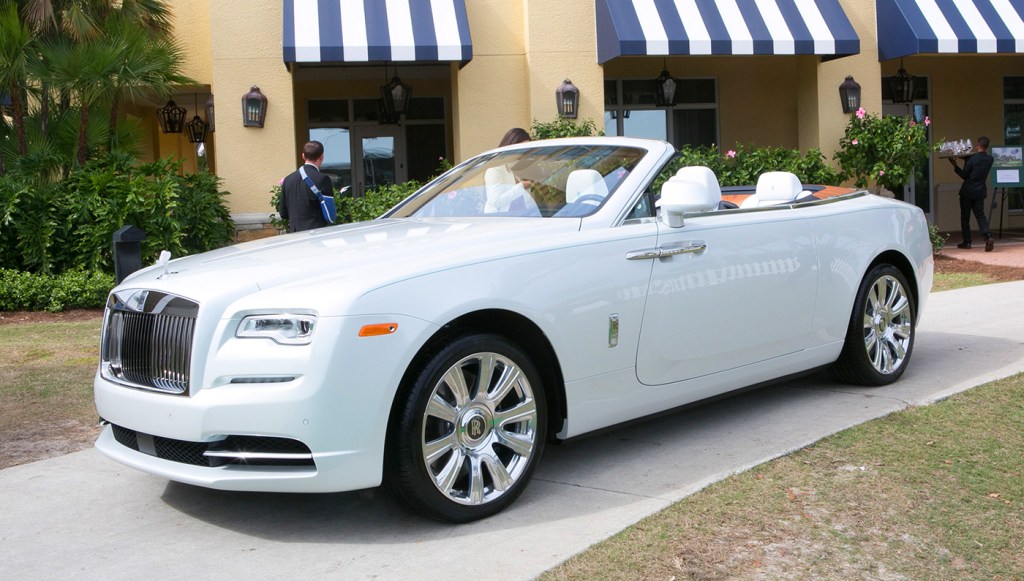 Winston Churchill once stated, “We make a living by what we get, we make a life by what we give”—a truism that suggests those who participated in the 2016 Naples Winter Wine Festival in Naples, Fla., this past weekend have created an exceptional existence. The Naples Children & Education Foundation (NCEF) and philanthropic bon vivants from across the United States convened at the Ritz-Carlton Golf Resort, Naples, to help launch underprivileged youth on a path toward prosperity. As part of a series of auctioned items, Rolls-Royce unveiled the first Dawn drophead coupe at the event, garnering a bidding battle that was ultimately won by Julian Movsesian of Newport Beach, Calif. He bested the rest by paying $750,000 for the bespoke beauty.

At a starting price of $10,000 per couple, festivities commenced on Friday, January 29, highlighted by a meet and greet with a few of the young ones being benefited and the festival’s Vintner Dinners. The 17 exceptional epicurean experiences were held in the private homes of festival trustees and paired celebrated chefs with world-renowned winemakers. Rolls-Royce Phantoms ferried a fortunate few from the media, including myself, from the airport to an intimate dinner cohosted by the marque and Australian wine legend Penfolds. The winery’s sommelier DLynn Proctor (featured in the documentary Somm) poured premier Chardonnay, Cabernet Sauvignon, and Shiraz, including the label’s signature 2011 Grange—all of which beautifully translated the terroir from some of the planet’s oldest soil.

Exclusivity carried over to Saturday morning with an informal but invite-only breakfast with Torsten Müller-Ötvös, the CEO of Rolls-Royce Motor Cars, who shared his excitement for the new Dawn. “The car being auctioned today is truly unique, the very first of its kind to be built,” explained Müller-Ötvös. “We feel that along with drawing a younger demographic, this model will attract more female buyers. Currently, 15 percent of our market is women, and I expect that share to rise within the next couple of years, particularly with the Dawn.”

A two-hour preview of the lots was complemented by ubiquitous tastings from over 40 vintners and 17 of the world’s 250 or so master sommeliers. Eight culinary stations also featured exquisite creations from chefs representing Ritz-Carlton hotels from around the country. Among the savory samplings were 24-day dry-aged bison with bourbon sauce, Virgin Island coffee-braised short ribs, edamame tofu with sea urchin, and several dessert tables to die for.

With a marching band announcing the start of the auspicious auction, a platoon of cheering volunteers ushered the army of nearly 600 altruists into a tony tent and its sea of white-linen tables set under a series of chandeliers. The charitable challengers started off hot, with the first lot (a magnum from each vintner present) rocketing to six figures in the first few moments before topping-out at over $200,000. The camaraderie of the crowd, whose social circles were obviously concentric, fueled the friendly competition—as did the pep squad that rushed to surround every high-bidder throughout the auction’s 64-lot duration. Alliances were carved and crushed as rival tables tried to outperform with their paddles amidst the constant mantra of “bid high, bid often, it’s for the kids” that rang out through the room. Two matriarchal mavens eventually dueled for a cooking class and dinner with celebrity-chef Mario Batali and award-winning actress Glenn Close—both the disappointment and delight were palpable when it went for a staggering $400,000.

As expected, the Rolls-Royce Dawn was the top earner of the evening, but a shimmering and sultry blue Ferrari 488 Spider finished second with a $650,000 bid. In all, the live and online auctions garnered $11.1 million over the weekend, and a total of $146 million has been raised since the charity event began in 2001.

And it is all money well spent: 55 percent of the kids in Collier County (over 200,000 youngsters) are assisted by NCEF and its initiatives in early education and health-care services.The focus is on breaking patterns of privation and fostering a new cycle for success. As the festival’s co-chair Sandy Moran reminded everyone at the start, “First you learn, next you earn, then you return”—sold. (napleswinefestival.com)