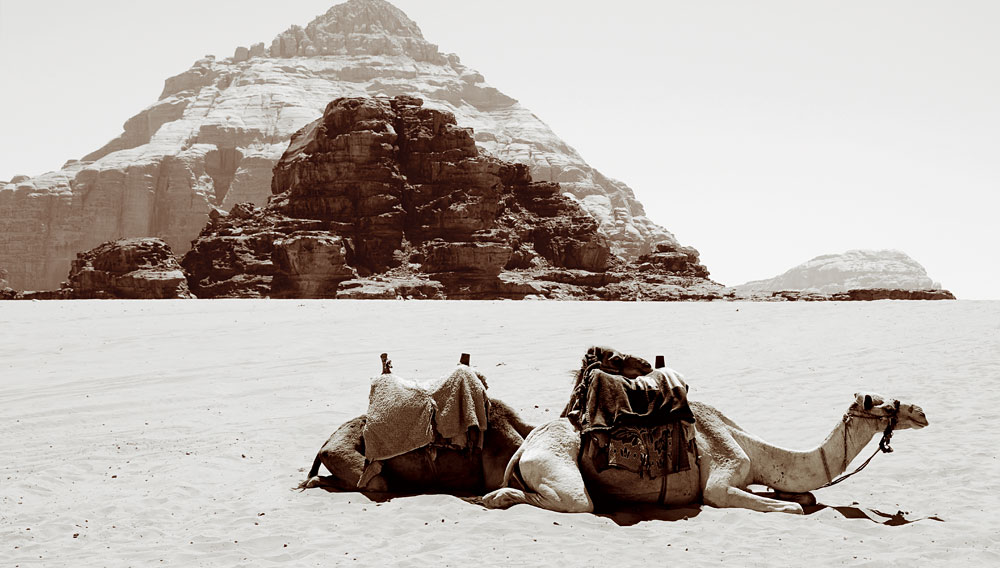 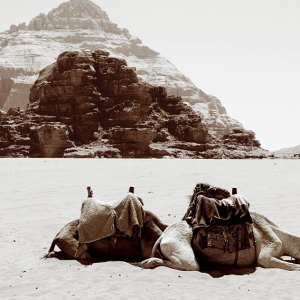 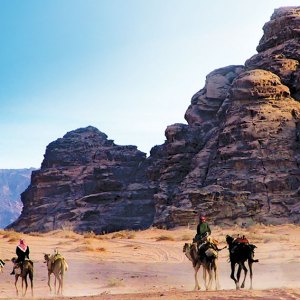 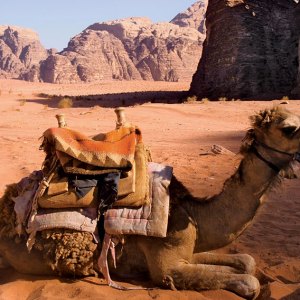 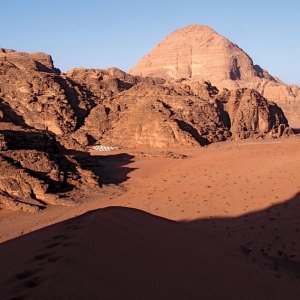 My camel and I are not getting along. Our relationship got off to a rocky startonly moments earlier when I swung my leg over the scratchy wool blanket and saddle that covered the animal’s hump. I had done so with a pent-up enthusiasm for adventure and exploration that all but seeped out of my pores like the beads of sweat that—even at this early hour of the day—are slowly snaking their way down my forearms and gathering at my wrists. This moment of discovery is what motivated me to travel to Wadi Rum, an arid sanctuary in the southern region of Jordan that is rich in history and steeped in a sense of timelessness. It was here in this 286-square-mile expanse of red-dust desert and sandstone mountains, some 3,200 feet above sea level, that Thomas Edward Lawrence banded with local Bedouin soldiers to battle (and ultimately defeat) Ottoman armies during World War I. And though the rest of the world has embraced modern advancements, this place has, for the most part, remained unchanged. It seemed like a grand adventure to experience Arabia as Lawrence once had. However, to do it right required attention to detail. Among other things, it required a camel.

My ride, by contrast, came to this early-morning rendezvous with a less-than-zealous disposition. Camels are known to be temperamental creatures—surly beasts with a penchant for spitting and growling and snapping at one another and at those who attempt to control them. Camels, as many people know, can live up to two weeks without water and are capable of carrying more than half their body weight for extended periods of time. But that doesn’t mean they enjoy it. “Are you good at riding camels?” I asked my guide, Raed Saleem, before we mounted and set off through the desert. “I can ride,” he told me, “but that doesn’t mean I’m any good.” To ride a camel without a Bedouin escort requires a proficiency in Arabic, I’m told. After four unsuccessful years of French classes in high school and two more stressful years of Italian in college, the prospect of quickly picking up Arabic seems preposterous. If Saleem, who speaks the language fluently, cannot commandeer a camel with any great success, there is little hope for someone like me. My camel appears to be well aware of this.

And so we begin our journey through the desert quarreling with one another. Early on, it becomes clear that only two scenarios are likely. Though ample room exists to the right of the camel directly in front of us, my camel, named Brix (or perhaps Bricks, I surmise, given its stubbornness), instead chooses to walk directly behind, and very close to it. That’s the first scenario—and the more pleasant of the two. More often than not, Brix saunters farther to the left, sideswiping the camel next to us and pinning my leg between them. No crash course in Arabic commands is going to improve this situation, I decide. And so, at our first stopping point, I dismount my disgruntled steed and improvise. Snapping off a nearby clump of white saxaul, a scraggily shrub that seems to be a delicacy for all the camels in this caravan, I offer it up to Brix before returning to the saddle. The gesture does the trick. For the remainder of this morning’s expedition,Brix keeps a comfortable distance between us and the other camels. We’re in this together, and my gift to Brix seems to remind him of that.

Almost a century ago, Lawrence had extended his own gesture of goodwill to the local Bedouin armies.

When he arrived in the Arabian desert in the fall of 1916, Lawrence left his British ways of life behind and adopted the customs and dress of those whom he was fighting for. The gesture conveyed his sincerity and his solidarity with the Arabian cause. It also signaled what would become a lifelong commitment to the liberties and freedom of the Arab people, which Lawrence championed on the fields of battle through the desert and later in life through political discourse. The token was not lost on the Bedouins at the time, nor is it forgotten almost a century later. According to Saleem, Lawrence remains a popular name for many children born into Bedouin families.

At the time of his death in 1935, Lawrence was revered as a hero for what he had accomplished in the Arabian desert, though he attempted to downplay such praise, given that the Arabs were not awarded their freedom, despite their victory over the Ottomans. Even so, Lawrence’s reputation intensified after the publication of Seven Pillars of Wisdom, a book that he wrote in 1926 about his endeavors fighting as part of the Arab revolt. In the wake of his death, news programs aired grainy footage of Lawrence aboard an ocean liner and proclaimed him to be “the most remarkable man that this age has discovered.” Even Winston Churchill, who attended Lawrence’s funeral, deemed him to be “one of the greatest beings alive in this time.”

When conflict was at its highest in the now-Jordanian desert during World War I, an American journalist named Lowell Thomas enlisted the help of a cameraman and together they trekked through the red sands of Wadi Rum, chronicling the exploits of Lawrence and Prince Feisal—the leader of the Arab revolt—to produce what Thomas called an “adventure film.” To walk in Lawrence’s footsteps today is no less an adventure, although those footsteps now are made in less harrowing times. In his book, Lawrence wrote: “In these pages the history is not of the Arab movement, but of me in it. It is a narrative of daily life. . . . It is filled with trivial things . . . partly for the pleasure it gave me to recall the fellowship of the revolt. We were fond together because of the sweep of open places, the taste of wide winds, the sunlight and the hopes in which we worked. The morning freshness of the world-to-be intoxicated us. We were wrought up with ideas inexpressible and vaporous, but to be fought for. We lived many lives in those whirling campaigns, never sparing ourselves.”

As one stands by the remains of Lawrence’s home in Wadi Rum, which today is nothing more than a solitary stone wall near the base of a sandstone cliff, it becomes clear how such a resolve and such inspiration could emerge. The world stretches out in a seemingly endless vista of windswept dunes and dramatic rock formations. That vista doesn’t change, even as visitors climb to higher perches among the surrounding mountains; it only grows wider.

For travelers with a penchant for history, Wadi Rum is an obvious destination, but film aficionados also make pilgrimages there, since Horizon and Columbia Pictures filmed many of the battle scenes of Lawrence of Arabia on location in Wadi Rum over a 17-month span. “As a fan of the film, it was amazing to experience it firsthand,” says Andy Wong, a lead animator at Industrial Light & Magic, a visual effects division of Lucasfilm in San Francisco. “It’s already so epic on-screen; so to be there and really experience the scale and beauty of it all is a once-in-a-lifetime opportunity.”

For those eager to retrace the footsteps of Lawrence themselves, Abercrombie & Kent (http://www.abercrombiekent​.com), a luxury travel company with a half-century of experience, can help them do it in style. Founded in 1962, A&K first offered only African safaris, but by the early 1970s it had expanded, and with offices in the United States, Great Britain, and Australia, other international trips joined the fold. Today the company operates from 50 full-time offices around the world, and according to Geoffrey Kent, A&K’s founder and CEO, that network allows the company to offer travel opportunities that are tailored to experienced travelers or those who wish to travel alone. For example, through the company’s private travel program, clients can gain access to Egyptian archaeological sites that normally are off-limits to tourists, or to other sites such as Petra, in Jordan (see “Lost and Found”).

Wadi Rum also is a setting for private travel experiences offered by A&K. “It’s really Lawrence of Arabia that makes people want to see it,” says Rami Girgis, Abercrombie & Kent’s product manager for the Middle East. The company can arrange full-day and multiday expeditions on camelback that trace the routes used by Prince Feisal and the 29-year-old British intelligence officer. Hot-air balloon rides and ultralight flights over the protected deserts can be arranged for those who wish to see the region from a different perspective. And for those who are not averse to roughing it, overnight stays at Bedouin camps or private campsites allow travelers to take in the serenity of the desert under a starry night sky.

An independent Arab nationdid not emerge immediately from the battles of World War I, but the efforts of Lawrence and Prince Feisal were not made in vain. Though Lawrence would not live to see it, the Hashemite Kingdom of Transjordan was established in 1946, and today, some 66 years later, Bedouin appreciation for that homeland is no less spirited.

As we move west out of Wadi Rum and begin a slow descent toward sea level, the temperatures begin to rise. It grows hotter by 1 degree Celsius (about 2 degrees Fahrenheit) every 150 meters. By the time we reach the base of Feynan Valley, the mercury has climbed to 114 degrees Fahrenheit, but still our local guides speak only with adoration for their homeland. “God gives the land to the people, but only for a time,” says Salim, one of our hiking guides. “People have lived in this land for thousands of years. The Byzantines, the Romans. But where are those people now? They are gone. But the land is still here.”

“When you leave Jordan, you don’t just remember archaeological sites,” says Girgis. “You also remember people and [their] stories.”

Months following my visit, I know this to be true. I reflect back on the many Bedouins that I met during my trip and still vividly recall their unconditional hospitality. I remember their gratefulness for my interest in their homeland and their willingness to share it with me. But more than anything else, I recall the vibrant night sky in Wadi Rum and the brightness of the Milky Way as it stretched out above us and around the dark silhouettes of the sandstone mountains that loomed overhead. I remember the expanse of silence that descended over the desert in the evening and the peacefulness I felt under a canopy of countless stars.

“All men dream, but not equally,” Lawrence wrote in Seven Pillars of Wisdom. “Those who dream by night in the dusty recesses of their minds wake up in the day to find it was vanity, but the dreamers of the day are dangerous men, for they may act their dreams with open eyes, to make it possible.”

Lawrence may have dreamed during the day, but I have no doubt he found inspiration for those dreams at night under the stars in Wadi Rum.