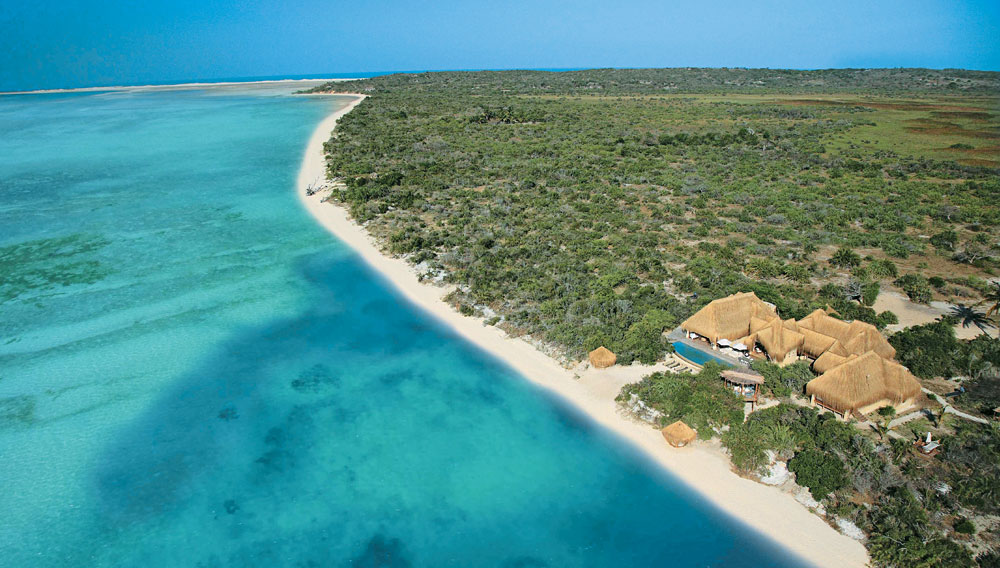 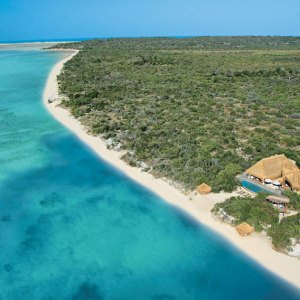 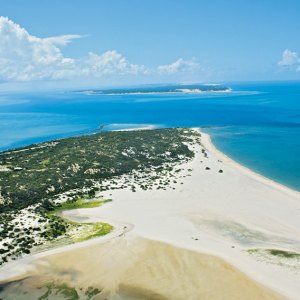 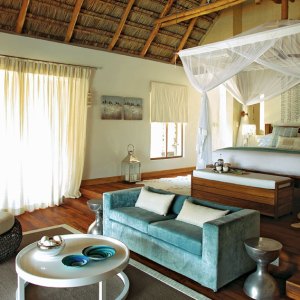 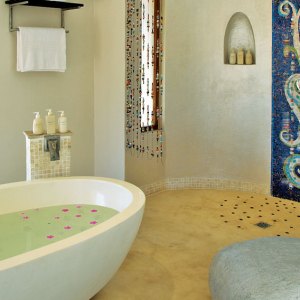 Looking out to a cloudless sunset over turquoise water, Rachel Buchner recalls a rainy day about four years ago. Buchner, the general manager at Mozambique’s Azura resort, remembers this particular day because one of her porters, a former fisherman, failed to come to work. “The next morning he showed up, and I asked him where he was,” she recounts. “ ‘It was raining,’ he said to me, shrugging. He didn’t go fishing in the rain, so he assumed he didn’t need to come to work.”

Buchner has joined me beside the infinity pool of the three-bedroom Presidential Villa at Azura, a discreet island getaway in Mozambique’s Bazaruto Archipelago. Jonnase, the villa’s butler, has just come around the teak bar to bring us two perfectly mixed fruit juices. “There was a learning curve, to be sure,” Buchner continues as Jonnase silently scoops up the cool, jasmine-scented washcloth he offered me after my late-afternoon dhow cruise. “Early on, some of our staff would hide from the guests in the back booths of the restaurant. They were afraid of them.”

At the time, shortly after Azura’s opening, Mozambicans could hardly be faulted for any lack of training. Once one of East Africa’s premier destinations, Mozambique was ravaged by 15 years of civil war between the Renamo rebels and the Marxist government. From 1977 to 1992, nearly a million people were killed in Mozambique, and five times that many were displaced. Land mines made amputees of thousands more. The country’s infrastructure was devastated during the conflict, and starvation remained rampant for years after its end.

Though still struggling to right itself, Mozambique began showing signs of recovery in the early 2000s. The country’s progress has accelerated over the past few years, with a boost from international tourism. From 1999 to 2009, the annual number of foreign visitors to Mozambique increased almost tenfold, from 240,000 to more than two million. In 2005 alone, the country’s tourism industry grew by 37 percent—the largest increase of any nation in the world. “Mozambique is, once again, the new kid on the block,” says Will Jones, owner of safari company Journeys by Design. “There’s still an innocence about tourism. They’re excited by it.”

Jones should know. English by birth, he grew up in six African countries and has led private adventures throughout the continent since founding Journeys by Design in 1999. I met Jones in New York last summer, when I was considering a trip to East Africa. I mentioned a previous attempt to visit Mozambique—a few years after the war ended, I was turned away at the border for visa issues that were never adequately explained—and my desire to return. “Now’s the time,” he told me with a smile.

A few months later, Jones and I were heading to Mozambique for a journey that would take us from the country’s finest beach resorts to its rapidly recovering game parks. Sandwiched between Tanzania to the north and South Africa to the south—and sharing a border with four other countries—Mozambique has more than 1,500 miles of mostly pristine coastline along the Indian Ocean. Strung just offshore are a number of island chains that were left unscarred by the war and are now at the heart of the country’s reemergence as a tourism destination.

Among the jewels in the Bazaruto chain, off Mozambique’s southeast coast, is Benguerra Island. Though little more than a sandbar rising a few feet above sea level, Benguerra is home to about 2,000 residents. It is also the setting for a world-class resort in Azura, where 16 thatch-roofed villas, each with a private swimming pool, are separated from the sea by a few yards of smooth white sand.

The channel offshore from Azura is shallow, and the rising and falling tides create and dissolve amoebalike islands on a daily basis. One afternoon, after snorkeling among moray eels and titan triggerfish, I am delivered to one of these shimmering white sandbars with nothing more than an umbrella and a five-course picnic lunch. Alone and surrounded by placid water, I pass the hours until my private island, which I watched grow, begins to shrink. The water rises from all sides, at first slowly, then with speed. Small waves from opposite directions collide as the sea takes back my sanctuary. Just in time, my return boat appears and I climb aboard. Minutes later, when I glance back, my idyll is gone.

A few miles across the channel from Azura is Pambele, a private residence that, despite being on the mainland, is best reached by boat. Built in 2002, Pambele sits at the end of a remote peninsula in the Vilanculos Coastal Wildlife Sanctuary, a 62,000-acre reserve where zebras, giraffes, and eland have been reintroduced. The compound presides over 600 feet of private beachfront and can accommodate 14 guests in five separate villas. In the common area, shaggy jecca-thatch roofs cover decks of Rhodesian teak that lead to an infinity pool and open-air bar.

Early one morning at Pambele, after a dawn kayak paddle through the nearby mangrove swamp, I watch an African darter and a crowned hornbill sweep past while an ibis and slaty egret pick for food on the beach. In the rapidly retreating tide, a dozen dhows—the sailboats that are the workhorses of these waters—are loaded with men chattering loudly in Xitswa, the local language. The fishermen hoist their large black, green, and yellow sails and turn them toward the wind, heading out into the channels between the sandbars before casting their nets into the racing current.

Similar scenes play out daily up and down Mozambique’s coast and throughout its islands. In the Quirimbas, located about 1,000 miles up the coast from Vilanculos and the Bazarutos, the setting is even more exotic. “Unlike some of the southern islands,” Jones tells me, “up in the Quirimbas things are still pretty wild and largely unexplored.”

Our next stop, in the heart of the Quirimbas Islands not far from the border with Tanzania, is indeed a wild spot. A crescent-shaped coral outcropping just 7 miles long and a mile wide, Vamizi Island is home to 1,500 residents and just one resort. And one resort is all it needs.

Opened in 2006, the Vamizi Island resort features 15 chic guest villas spread out generously over nearly a mile of soft white beach. My villa is the last one in the line. “There are a few monkeys beyond you,” says Leigh Hurlin, Vamizi’s lodge manager, “and then nothing.”

My commute along the beach and back to the main lodge for meals—when I opt not to take them in my villa—sets the rhythm for my time at Vamizi. “It’s a Robinson Crusoe lifestyle, no doubt about it,” Hurlin confirms. However, with a staff of some 150 serving no more than 39 guests, it is a very soft castaway’s life, to be sure. In fact, the experience was quite indulgent enough for a member of one of Europe’s royal families, who recently spent his honeymoon at Vamizi. “A very nice man,” Hurlin recalls with a laugh, “but we had to tell him to go to bed every night.”

As much as Vamizi brings order to nature, the resort offers a true sense of remoteness that is its primary attraction. It is also an ideal setting for unwinding before or after the ultimate nature experience: an African safari. “While Azura is a great combination with a South Africa safari, Vamizi is a perfect choice to team with a Tanzania safari, say, to the Selous Reserve,” Jones tells me. Before the civil war, however, Mozambique itself was home to one of Africa’s premier game reserves. It is there that Jones and I head next.

Gorongosa national park, located in the heart of Mozambique’s mainland, was one of the many casualties of the country’s civil war. Before the war, “in the late ’60s, Gorongosa rivaled Kruger [National Park in South Africa] in number of visitors,” Jones says. But the park and the area around it were a stronghold for rebel forces, and Gorongosa’s wildlife suffered tragically. The elephant population of 2,000 was all but wiped out, the number of lions plunged from 500 to 10, and the park’s 14,000 Cape buffalo were slashed to double digits.

During a trip through Mozam­bique in 2002, American entrepreneur and philanthropist Greg Carr visited Gorongosa and saw an opportunity to revitalize the park. Carr committed both funds and time, and today, in a public/private partnership, he is helping Gorongosa make a strong comeback from the brink.

As Jones and I land in Chitengo, the park’s main hub, yellow baboons scamper off the simple airstrip. The dry and dusty bush and heavy heat are a world away from the soft breezes and white sand of Vamizi. New buildings, a visitor center, and simple lodgings are visible evidence of the Carr Foundation dollars at work. So, too, are the spiral horns of a greater kudu that we spot through palm groves and clusters of yellow fever trees on our way to what, at this point, is the only private concession in the park’s nearly one million acres. We soon pass troops of baboons mingling with scores of impalas. Across a broad and open floodplain, warthogs mingle with sable antelopes and waterbucks.

Explore Gorongosa, the lone private camp in the park, is a bare-bones settlement of six tents on the shores of the Rio Mussicadzi. “You don’t want to walk down right by the river,” advises Rob Janisch, who opened Explore in 2009. “It’s loaded with crocodiles.”

Janisch’s low-key camp hosts as many as 12 guests, who are served by a staff of 25. The camp has limited electricity, and toilets are tended with ashes from the evening fire, but Explore offers an intimacy with the bush that is hard to find in more amenity-laden parks. “The whole park is more a project than a business,” says Janisch. “You don’t come here to tick off the Big Five, but we can show you some amazing things.”

With Explore, Janisch also hopes to accomplish some amazing things. “It’s a flagship,” he explains. “In 10 years you won’t have the exclusive trip you have now, but we’ll have brought this place back, given it to the people. It’s a story of hope.”

“This isn’t a first safari,” Jones says. “If you want your sure thing, there are other places to go, but there aren’t many places that have this solitude and space. You can take over the whole camp and have a very personal experience—a million acres virtually to yourself. It’s real frontier.”

And the wildlife is coming back faster than expected. “It’s all about critical mass,” Janisch tells me. “The impala hit it two years ago and are flying.” Several cheetahs are reintroduced to Gorongosa during our stay at Explore.  And late one afternoon, as the sun is setting, we bear witness to the park’s recovering elephant population.

We spot the herd, about 50 strong, as it is feeding in the fading sunlight. The air is pungent as we squint to see the gray pachyderms vanish in the night. But in the sudden and total blackness, a bold and loud bellow comes roaring from a bull that is clearly quite close. His call rips open the night, warning the human intruders and, it seems, trumpeting the return of Mozambique.