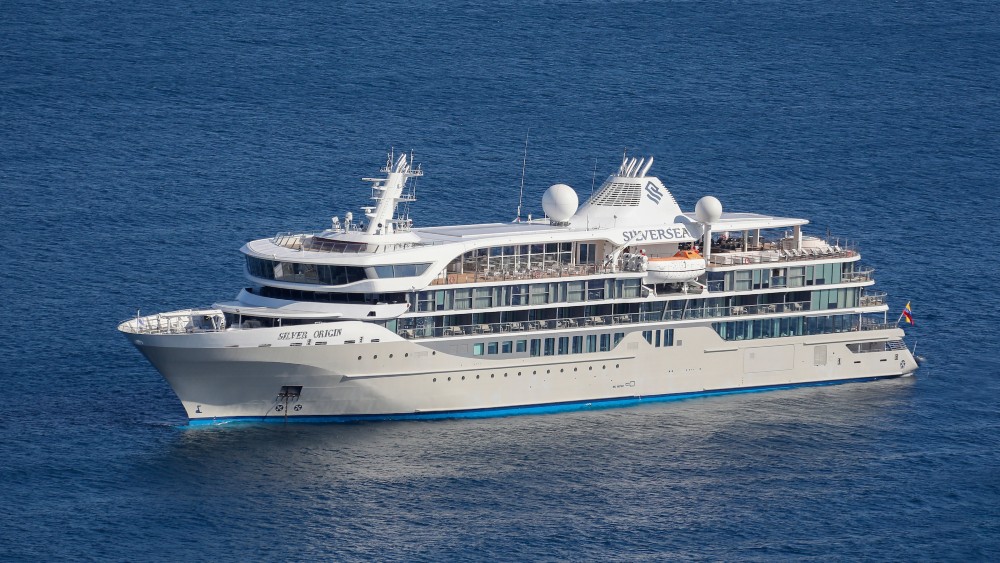 “This is not really a place you can experience from a hotel,” says Jason Liberty, the president and CEO of Royal Caribbean Group. We are in the Galapagos Islands, the highly protected volcanic archipelago some 600 miles off the coast of Ecuador where a 26-year-old Charles Darwin found the inspiration for his theories of evolution. And, in lieu of a hotel, Liberty and I are sitting on Silversea Cruises’s new luxury expedition ship, Silver Origin, a few moments before he will lead the ship’s christening ceremony.

Royal Caribbean purchased Silvesea in 2018 and, after an initial investment in the product (which Liberty says doubled down on Silversea’s best-in-class reputation for luxury and service), its first big project was Silver Origin. Launched at the end of February, this is the brand’s first ship to be purpose-built for a specific location—meaning that for its expected 40-odd year lifespan, Silver Origin will only bring bucket-listers to these remote islands for wildlife adventures, so every aspect of the ship has taken the destination’s strict size, staffing and environmental requirements into account.

The embarkation lounge at the back of the ship  Silversea Cruises

Silversea CEO Roberto Martinoli is particularly proud of the Silver Origin’s dynamic positioning, which allows the ship, with engines turned off, to maintain its orientation and angle so as not to disturb delicate marine life below. Even the lighting onboard is made, he says, in a way that will not disturb wildlife at night. Not that you’ll need any lights at all when, as we did, you pull within a few hundred yards of the Wolf volcano in full flood of an eruption, with brilliant, almost fluorescent red magma illuminating the equatorial sky near midnight and both the Southern Cross and North Star looking down on your journey.

With a max capacity of 101 passengers (making it one of the larger in the Galapagos), and higher zodiac-to-guest and guide-to-guest ratios than most other ships in the region, the ship is able to comfortably help passengers explore land and sea sites along the itinerary. The landings happen in accordance with the National Park service rules and, given the vessel’s larger size, almost always meet the sites’ max human capacity—which means Team Silver Origin will often have total privacy on an excursion. Not that you’d notice other expeditions exist when swimming with sea lions and whitetip reef sharks off Guy Fawkes or bobbing about with serene green sea turtles off San Vincente Roca, spotting the famous blue-footed booby in plentiful droves.

Afterwards, you’ll be greeted back to the ship by friendly staffers proffering refreshing towels, hot Ecuadoran chocolate and iced teas. And both during and in between the walks among the Palo Santo groves on Isabela island and the visits to the Dune-scape of Bartolomé island, guests will be under the companionable on-board tutelage of the Silversea expedition guides, many of them who are from the Galapagos and have both a naturalist savant-style ability to answer every arcane question imaginable and a personable way of relating the anecdotal history of the islands and their experience of them.

Life onboard—swaddled in what Silversea CCO Barbara Muckermann calls “whisper luxury”—also helps set Origin apart. From the elegant marina/embarkation point at the back of the ship, one enters a kind of floating clubhouse hung with prints, portraits and maps from the Royal Geographical society (who sent Darwin’s Beagle expedition on its mission to map the area in 1831) and a collection of art overseen by Peter Millard & Partners. The low-slung club furniture here, bookended by glass cabinets of curiosities, have a campaign style feel, not unlike that you’d find in a luxury safari tent (though here in mushroom-y tones of taupe rather than savannah beige).

One of the spacious suites  Silversea Cruises

Up two flights, past the massive prints by Silversea’s partner photographer Steve McCurry, the Origin’s version of a lounge (where the team receives briefings, lectures and aperitifs) could be mistaken for the lobby of an Armani hotel in Milan—all blousy curtains and vignettes of white leather seating arrangements with flatscreen TVs. The 51 suites, which range from slightly bigger than my Manhattan apartment to a sprawling 1200-plus square feet, also feel more like floating Milanese hotel rooms than expedition barracks, with pale wood floors, bronze-edged marble touches and swoopy, Saarinen-style furniture. Each also comes with butler service, which inspired me to go the full Poirot, getting my case full of crumpled suits and shirts pressed for dinner, asking for a Negroni-making station in the room and specifying just which of the local organic chocolate bars I would be happy to see refilled each day.

The chefs source many ingredients from local purveyors like Carlos Farm on San Cristobal.  Silversea Cruises

As with the ship’s design, executive chef Carlo Bermudez’s menu is all about a sense of place and features an almost entirely Ecuadoran menu with products sourced in large part from the islands themselves (supplemented by meat, dairy and some produce from the mainland). “If it grows here, we buy it here,” Martinoli says. Chef Bermudez, who travels the Michelin-starred restaurants of the world in his off time, is particularly fond of Ecuadoran ceviches with slightly cooked proteins served in sauces somewhat richer than the Peruvian sort—think avocado or peanut bases—and he is intensely proud of the products they have been able to purchase locally. For passengers, the flavorful cuisine is yet another way Silver Origin keeps you grounded in the Galapagos, while also cocooning you in comforts.

Silver Origin offers alternating weeklong itineraries in the Galapagos; rates for a seven-day trip begin at around $11,500 per person.