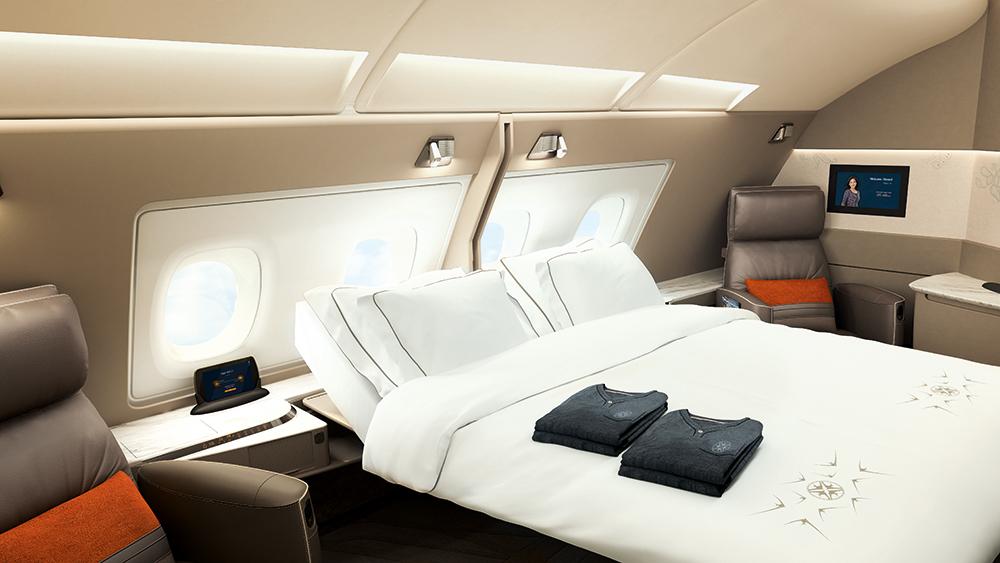 Singapore Airlines is returning to the skies in style.

After a nearly two-year pause during the pandemic, the airline’s Airbus A380 finally started flying passengers between New York’s JFK and Singapore’s Changi airport (with a stop in Frankfurt) again on Monday. This is in addition to the non-stop A350 flights between JFK and Newark’s EWR and Changi, which are also back in the air; the routes from Newark remain among the longest non-stop flights from the New York area, clocking in at approximately 18 hours and 45 minutes.

It’s worth booking the A380 option with the stop, though, as the carrier used the downtime to reconfigure the aircraft for the route. The revamped double-decker superjumbo jet, which is the world’s largest passenger plane, promises to elevate the in-air experience with even more luxurious features.

First and foremost, the aircraft is fitted with six lavish first-class suites akin to that of an upscale hotel. Spanning a generous 50 square feet, each cabin comes complete with reclining leather armchairs, a plush bed and sliding doors for added privacy. What’s more, two first-class travelers can choose to merge their suites to bump the living quarters up to 100 square feet. Of course, you’ll get a comfy double bed to share, too.

The suite has are an array of special compartments for your prized possessions.  Singapore Airlines

In addition, fliers will have access to a wardrobe in which a set of luxe pajamas and slippers can be found. To help you further settle in for sleep, there’s blackout window shades and a hotel-style evening turndown service—because why not? When it’s time to freshen up, the bathroom has a separate vanity, washbasin and toilet where you can use the amenity kit from French outfit Lalique.

Guests will receive an amenity kit by Lalique to freshen up.  Singapore Airlines

As for tech, the suite is equipped with a 32-inch HD touchscreen TV and a handheld tablet that controls everything from the lights to the in-flight entertainment. You’ll also receive a pair of Bang & Olufsen noise-canceling headphones, so you can enjoy uninterrupted tunes.

More beauty can be found in the details. The magazine rack, for instance, showcases stitching inspired by the Hermès Birkin. There are also thoughtful touches like a dedicated handbag compartment where you can store your actual Birkin.

Each generous suite spans a total of 50 feet.  Singapore Airlines

To top it off, all meals are served on fine linen and Wedgewood china, alongside the passenger’s choice of Dom Pérignon or Krug.