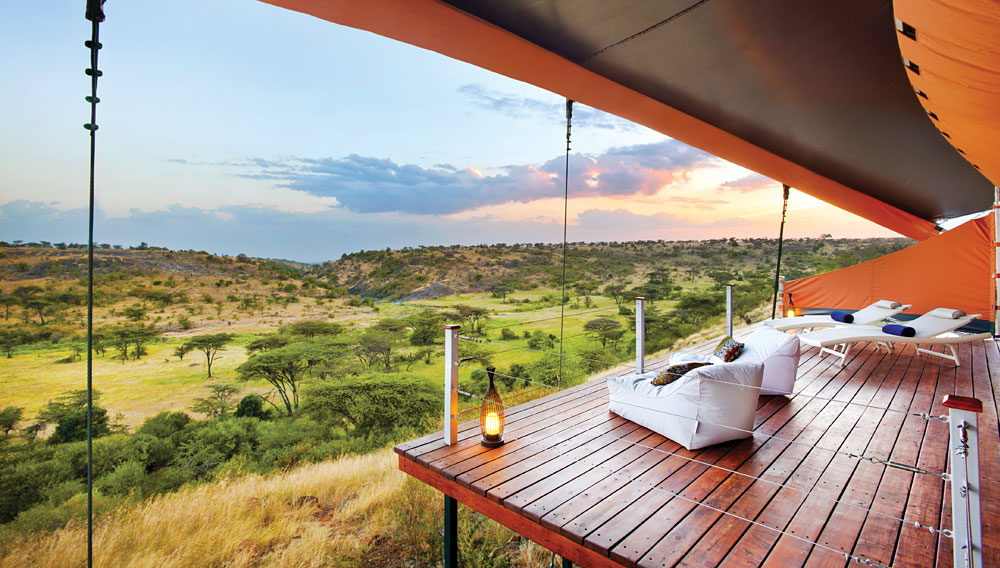 The wildebeests have been vacillating for hours, kicking up dirt, pouncing into the Mara River, and then nervously backtracking into the herd. It is June in Kenya’s Maasai Mara National Reserve, and I have come with my guide, Ping, to witness the great migration, an annual journey of some 1.5 million wildebeests and 300,000 zebras highlighted by their mass crossings of the Mara River. We have waited patiently while the skittish animals paced back and forth along the riverbanks, grunting and mewing in their migratory song.

Ping explains that there are many reasons to hesitate—lions and other predators lurk on the opposite side of the river, while the waterway itself is filled with hungry crocodiles. But as I look around the scrubby veld filled with Land Rovers and hulking white minibuses battling for prime position among the wildebeests, I cannot help but wonder if the creatures are suffering from a touch of stage fright as well.

Indeed, Maasai Mara National Reserve—a 580-square-mile park along Kenya’s southeastern border—is known almost as much for its crowds of people as for its animal herds. But as Ping and I make our way back to Mara Plains, a newly renovated safari camp located in the Olare Motorogi Conservancy, the traffic thins until ours is the only vehicle in sight, traversing the golden savanna entirely alone. It is here, in one of five conservancies near the park’s borders, that an exclusive alternative to the region’s popular safaris has emerged.

Totaling nearly 200,000 acres of unfenced land, much of it adjacent to the park, the Maasai Mara conservancies are the product of a deal brokered with the local Maasai landowners that allows them to continue to graze their cattle in the region while earmarking the land for conservation. The resulting five conservancies are home to a select number of small-scale safari camps—averaging about one bed for every 350 acres—as well as cheetahs, giraffes, hippopotamuses, and the Big Five. Unlike the wildlife, however, the average tourist is unable to travel between the park and its outlying rangelands, as the conservancies are reserved exclusively for use by the few camps operating within their borders.

In the Olare Motorogi Conservancy, Mara Plains and a handful of other small camps have become a template for neighboring conservancies, hosting a total of just 94 beds over an area of 32,900 acres (nearly twice the size of Manhattan). Established in 2006 and later expanded, the conservancy has stringent guidelines—including limiting the size of camps to no more than two dozen beds apiece—that minimize the impact on the environment while providing one of the lowest-traffic game experiences in the Maasai Mara region.

“Controlling the number of guests in the conservancy is key,” says Tarn Breedveld, general manager of Mahali Mzuri, a new Richard Branson–owned camp within Olare Motorogi. “Of course, the obvious by-product is that we have lower density and better sightings, but even greater is that we are protecting land that might have been sold to charcoal producers or wheat farmers, and saving it from the large-scale tourism model that exists in the national park.”

Mahali Mzuri, which opened in August, is an exuberant antidote to Maasai Mara’s mass-market lodges. Set along a lush ridge on the northern end of the conservancy, the camp’s 12 elevated tents are an unlikely combination of futuristic design and seamless integration with the natural landscape. Slate-colored canopy rooftops and orange canvas walls blend into the surrounding acacia trees, while modern amenities such as a spa and an infinity-edge pool offer luxurious post-safari retreats.

The camp’s greatest asset, however, is its proximity to the wildlife-rich valley below. “Oftentimes, you’ll have as many sightings sitting on your private deck as you would on a game drive,” Breedveld says. “We’ve even seen kills while lunching on the terrace.”

Roughly 7 miles southwest, Olare Mara Kempinski opened in January along the banks of the Ntiakitiak River. Cheetahs, leopards, and lions frequently pass through the unfenced property, while vervet monkeys are regular fixtures at the treelined pool. The camp’s 12 tents feature wraparound teak decks, four-poster beds, and claw-foot bathtubs. Game drives from the property are often short—not for lack of viewings, but for the camp’s proximity to wildlife. A typical drive might encounter a coalition of cheetahs, a pride of lions, and a herd of elephants guarding a newborn baby, all within the first hour.

Mara Plains, which is operated by Great Plains Conservation, reopened last July following a 6-month renovation. Accessed by a footbridge over the Ntiakitiak River, the seven-tent camp lacks the plunge pools and spas found elsewhere, instead focusing on impeccably executed contemporary-colonial decor. Leather armchairs, canvas trunks, and copper bathtubs add creature comforts, while reclaimed-wood floors and zip-up canvas doors maintain the authenticity of the camp’s surroundings. After game drives, guests gather for sundowners and dinner in the mess tent, which looks out to a lone acacia tree amid the sweeping savanna.

On my final morning at Mara Plains, I set out on another game drive with the optimistic Ping. “Today is a lucky day,” he says with a smile.

It does not take long for him to locate Amani, a mother cheetah, and her three cubs lazing in the sun, their bellies inflated like soccer balls from a recent meal. Contentedly dozing under a tree along the gentle slope of Iseketa Hill, the cats clearly will not be hunting today, so Ping restarts the safari vehicle and slowly drives on.

But just moments after leaving Amani, we spy a startled mother impala and her calf frantically fleeing from Nalepo, another cheetah known to frequent these hills. Unwittingly, the pair is headed straight toward Amani and her cubs, who have stirred from their nap and lie in wait no more than 100 yards away.

The scene unfolds like a nature film. With her calf charging at her heels, the mother impala realizes her mistake mere feet from Amani’s hiding spot and, turning on a dime, leaves her offspring as easy prey. The ensuing chase is painfully long, with Amani falling back to allow her cubs to pursue their target. All the while, I shakily snap photos while Ping narrates like an excited sportscaster calling a boxing match—“Down he goes, now up, so close!”—until at last the cubs have surrounded the cowering impala.

Nearly 30 minutes later, after the cheetahs have finished devouring their kill, I lower my camera to survey our surroundings. Watching Amani once again stretch out under her acacia tree, I am no longer in awe of what has occurred, but rather what has not. Ping and I remain the only two people in Olare Motorogi to have witnessed this stirring event. The show was ours, and ours alone.

Bordering Kenya’s Maasai Mara National Reserve, the 32,900-acre Olare Motorogi Conservancy was founded in 2006 with the mission to preserve the delicate Maasai Mara ecosystem by securing large parcels of land for a limited number of tourists. The result is a handful of upscale safari camps that offer unfettered access to a diverse wildlife population that includes the Big Five.

Reopened this past July following a 6-month rebuild, this seven-suite camp ($910 to $1,300 per person, per night) from Great Plains Conservation is located in the conservancy near the border with the national reserve. Several of the property’s spacious tents overlook the Ntiakitiak River, and a refined mess tent displays photos by the renowned wildlife filmmaker and Great Plains cofounder Beverly Joubert. The camp’s gift shop is also singular in its offerings, featuring the detailed craftwork of the local Maasai people, as well as custom pieces by the Nairobi-based fashion designer Anna Trzebinski. +27.21.434.5208, www.greatplainsconservation.com

Each of the 12 tents at this classically styled camp ($870 to $1,045 per night) is named for an animal frequently spotted from the accommodation’s wraparound deck. Opened in January, the property sits on a stretch of the Ntiakitiak River teeming with wildlife, including the resident cheetah, Acacia, and leopard, Narasha. Carved wooden masks and other local works decorate the camp’s main lodge area, and an organic garden provides much of the restaurant’s fresh produce and spices. +25.470.304.9000, www.kempinski.com

The newest member of the conservancy, this Richard Branson–owned camp ($590 to $1,340 per person, per night) debuted in August with 12 hillside tents overlooking a broad valley. Luxuries are most apparent here, with an infinity-edge pool, a stylish restaurant and bar area, and a serene spa at the base of the hill. In the spaceship-like tents, colorful local fabrics blend with overstuffed leather sofas and knotted wooden tables, while expansive terraces afford prime game viewing. +44.208.600.0430, www.mahalimzuri.virgin.com —J.C.