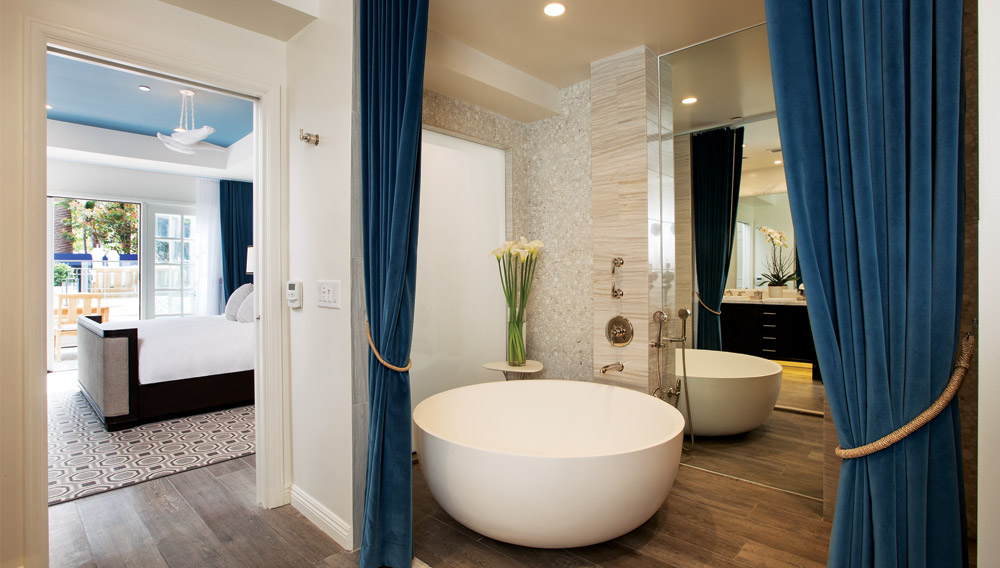 Once favored by everyone from Marilyn Monroe to Eleanor Roosevelt, the bungalows at the Fairmont Miramar Hotel and Bungalows have always been high on privacy. But the units, which are scattered throughout the property’s gardens and pool area, have been a little low on elbow room—until now. A collaboration between the Santa Monica, Calif., hotel and Robb Report Home & Style magazine, the new Bungalow One by Robb Report Home & Style (www.fairmont.com) connects four of the bungalows to create a 2,500-square-foot, three-bedroom retreat that melds modern-day amenities with classic and casual beach elegance.

The Southern California–based designer Michael Berman—known for his laid-back, locally influenced interiors—led the renovation of the bungalow, which debuted in June. His creation looks more like a well-curated home than a hipster hotel, with a mix of new and vintage furniture, original art, nonmatching textiles, and high-tech touches such as programmable bath and shower settings. “Even though this is the presidential suite, this is also in Santa  Monica, so it has a casual feeling to it,” says Berman, who took a linear row of bungalows and converted the center two into the villa’s core space, with a living room and master bedroom. Flanking the central area are two guest suites.

Each of the spaces opens onto a meandering terrace with views of the property’s king palms and birds-of-paradise. A built-in banquette and a series of seating areas are buffered—at least partly—from pool-goer glances by a second-tier terrace area. Call it the ultimate Los Angeles balancing act: a poolside hideaway that simultaneously satisfies the need for publicity and privacy.