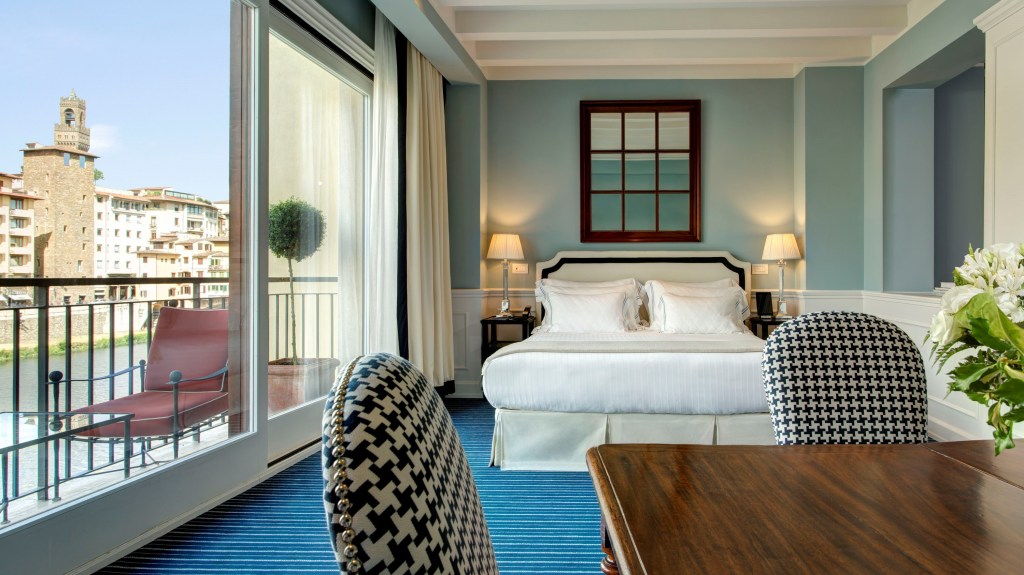 Celebrating its 50th anniversary in style, Florence’s iconic Hotel Lungarno has unveiled a complete refresh, bringing the historic property firmly into the 21st century. The hotel re-emerged in early June after a six-month renovation, revealing refreshed public spaces and 65 new guestrooms and suites.

The only hotel in Florence located along the Arno River, Hotel Lungarno has been envisioned by the interior designer Michele Bönan, a Lungarno Collection veteran whose other projects include J.K. Place Roma and Florence’s Palazzo Tornabuoni. The property’s new look still features the chic, nautical flair that it has long been known for—but the re-imagined lobby now makes full use of the hotel’s stellar vantage point with floor-to-ceiling windows that offer sweeping views of the river outside. The space also showcases the hotel’s extensive art collection, displaying works of such of 20th-century greats as Pablo Picasso, Jean Cocteau, and Antonio Bueno.

Inside the new guestrooms, the decor is crisp and refreshing, featuring tranquil blues and whites accented by pops of gold. Hotel Lungarno has also revealed new accommodations designed specifically with families in mind, with 10 spacious suites that can be cordoned off from the rest of the property, giving VIP guests or large parties unparalleled levels of privacy.

When not out enjoying one of the city’s many must-try restaurants, guests can return to the property’s Michelin-starred Borgo San Jacopo restaurant. Overseen by Executive Chef Peter Brunel, the newly renovated restaurant is now open exclusively for dinner and features an all-new private dining room that can be reserved for special parties. Guests can also complement the regional Italian menu with wines from the new 1,000-bottle wine cellar.