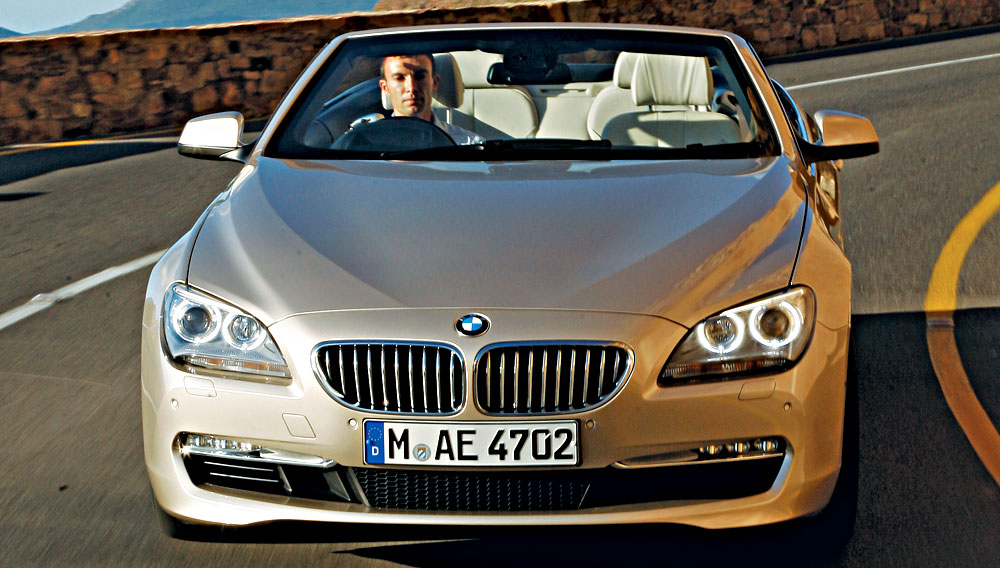 South Africa, despite its sociopolitical, racial, criminal, and economic despairs, remains an extraordinary adventure capital. Off the country’s coast, an intrepid traveler can descend into the Indian Ocean in a steel cage and go nose to snout with very large, very hungry great white sharks. The flat top of Table Mountain, rising 3,500 feet above Cape Town, is a destination for rock climbing and a launching pad for rappelling. Tamer activities might include a visit to a cheetah farm farther inland, where a visitor can crouch alongside a cat while it sleeps with its belly to the sun, stroke its warm fur, and listen as this fastest creature on four paws purrs contentedly.

South Africa was also the site for the January launch of BMW’s latest contribution to outdoor adventuring: the 2012 650i convertible. Here in the southern, summer-in-winter hemisphere, with the sun shining and the soft tops down, a pack of writers got a taste of the country and a chance to cross the veld at twice the speed of any cheetah.

The $91,400 650i is the second generation of the 6 Series that BMW revived in 2004 after a 15-year hiatus. (A new coupe will arrive later this year.) The initial reissue of the 6 Series convertible and coupe was a brave but unrewarding effort. Each weighed about 4,300 pounds, which is a ton of metal (actually more than two tons) for a 360 hp, 4.8-liter V-8 to move. Hulking, bloated, and nondescript—those were among the kinder criticisms of the car. The 650i quickly became an expensive dog, lumbering along as one of BMW’s slowest-selling models throughout its initial six-year production run.

Paradoxically, the new 650i is heavier yet much better. It has bulked up by 254 pounds, thanks to the addition of new high-tech components and increases in length, width, and wheelbase by 2.6 inches, 1.6 inches, and 3 inches, respectively. To compensate for the added girth, BMW fitted the car’s 4.4-liter V-8 (the same engine that powers the marque’s X5 and X6 SUVs and its 5 Series and 7 Series sedans) with twin turbochargers that increase its horsepower to 400 and give the 650i a useful 450 ft lbs of torque.

Longer in length and shorter in height, the new 650i displays a leaner and more proportional silhouette and stance. It still has a large derriere and a wedge-shaped crouch, yet the back end is chiseled sharper. All this reshaping of the sheet metal, which includes a pair of low-lying flying buttresses flanking the trunk, has produced a convertible that is hugely handsome and borderline beautiful.

When they developed the 650i, 6 Series project leader Frank Ochmann and his team were well aware of BMW’s past pratfalls. In the 1990s, chief designer Chris Bangle added a fat lip to BMW boot lids (ostensibly to increase trunk space), creating the Bangle Butt, which had some BMW diehards demanding that he be placed in front of a firing squad. Before Bangle, BMW’s styling was soft, even stodgy, and not far removed from the three-box shape of olden times, when the Berlin Wall was being poured. Most recently came iDrive, motoring’s answer to the Rubik’s Cube, which initially was incomprehensible to anyone except 15-year-old StarCraft champions.

“The asset of this car [the new 650i] is its design,” says Ochmann. “For the buyer, it demonstrates their attitudes about life, their sense of luxury and elegance, and their choice of a car that is the perfect combination of modern design and the latest technology.”

Standard equipment and options for the 650i convertible include a rearview camera (with the lens craftily tucked behind the BMW roundel on the trunk), blind-spot and lane-departure warning systems, automatic high beams, and a heads-up display that shows speed and navigational information clearly, even when the sun is at the driver’s back. The navigator is coupled to a new, improved iDrive system that finally is as intuitive as it is intelligent; it takes only seconds to conquer because it is programmed for Neanderthals.

Among the car’s most clever design touches is the one involving the rear window. It rises and descends independently of the top, serving as a draft screen and conversation saver when the top is down.

Transmission options for the 650i reflect a type of role reversal. For the European and U.S. markets, BMW is offering the car equipped with an 8-speed automatic controlled by both gearshift and paddles. But only we Yanks can order the 650i with a 6-speed manual, which Europeans once insisted on having, as they considered it a sign of their driving purity. Give credit or blame for the change in attitude to Ferrari and Maserati, which have spoiled European motorists with paddle shifting that is only milliseconds removed from F/1 standards.

The standard manual settings of Comfort, Normal, Sport, and Sport Plus handle the dynamics of steering, shifting, damping, and roll control for the 650i, although the seats of our pants had trouble determining significant differences between any of the settings. Electronically controlled dampers automatically adjust compression and bounce, and a smart steering system not only reduces the turning circle by some three feet, but also automatically enables quicker lane changes. The system even puts the binders on tail wag, as we discovered while overcooking the car into a 90-degree turn, crossing hands in Lewis Hamilton fashion, and still managing to make the corner in a relatively tidy manner.

The 650i’s interior is not majestic, but it is sufficiently pleasant. The cabin curls around the driver and front-seat passenger, forming a comfy encapsulation. Controls, dials, and console fittings are positioned for minimal movement, thereby maximizing ease of use for the driver. Passengers will not complain about the rear-seat room, which is greater than it was on the car’s previous version. The front seats adjust to 20 positions—though try as we might, we could not find a need for more than three of them—and they were comfortable enough to let us drive 100 miles or more before having to pull over and perform isometrics.

Though a vast improvement over the previous iteration, the new 650i is not flawless. The ultrawide navigation screen is in the dead center of the dash, where God meant it to be, but it is mounted high, which certainly goes against His wishes. A metal frame adds to the visual domination. And those magnificent buttresses on either side of the trunk create blind spots.

When under way, despite the twin turbochargers, the 650i did not seem to be rushing anywhere. The car is quite quick—it completes the zero-to-60-mph dash in 4.9 seconds and has enough midrange acceleration to let drivers slip into the smallest holes in the longest lengths of slow-moving traffic—but the gear changes were muted, especially when the top was down and the drivetrain was competing against the noise of the wind. No sounds of shifting meant no sense of performance, until we looked down at the tachometer and wondered how long the needle had been in the red and what that burning smell was.

Still, this is a first-class motorcar that with minor equipment tweaks and enhancements from BMW’s M performance division—like the ones that AMG has provided for the Mercedes-Benz CLS63 AMG (see “Efficiency Gains,” page 121)—could evolve into a class leader.

The 650i served its purpose well in South Africa, enabling drivers to bond with nature and experience the exhilaration of open-air motoring in a land that, despite its image as a deeply troubled nation of huge racial disparities—it was once described as the world’s most protest-rich country—remains a fascinating destination.

From the southern capes to the country’s northern borders with Botswana and Zimbabwe, the Afrikaans language and unpronounceable place-names such as Kraaifontein and Babilonstoringberge preserve South Africa’s Dutch heritage. Britain’s colonial influence is apparent in a statue of Queen Victoria outside Cape Town’s parliament building and in a memorial to Cecil Rhodes at the foot of Devil’s Peak, adjacent to Table Mountain. Visitors also see the lingering British presence in Cape Town’s wealth of English/Irish pubs and huge, greasy breakfasts, which if not to die for certainly are life-threatening.

An absolute asset is the country’s wildlife, which includes more than 200 species of mammals. The cheetah farms, which have helped bring the animal back from the brink of extinction, are among the many wildlife reserves throughout South Africa where the public can view the untamed. Funded largely by one-day or sleepover safaris, the reserves also protect vulnerable populations of leopards, antelope, wildebeests, zebras, black eagles, rhinos, and hippos from hunters and poachers.

African penguins parade and pose in coastal rookeries, blessing whatever power sent them to live in this subtropical clime instead of Antarctica. Baboons indolently squat along coastal roads, letting drivers know that this is their turf. To shoo them away is to risk having the grille ripped out of your nearly six-figure convertible.

We must not overlook the charm of South African motorists, who, upon seeing a car approaching from behind, will invariably move over to allow a safe, courteous pass. This is a species that is indeed virtually extinct.