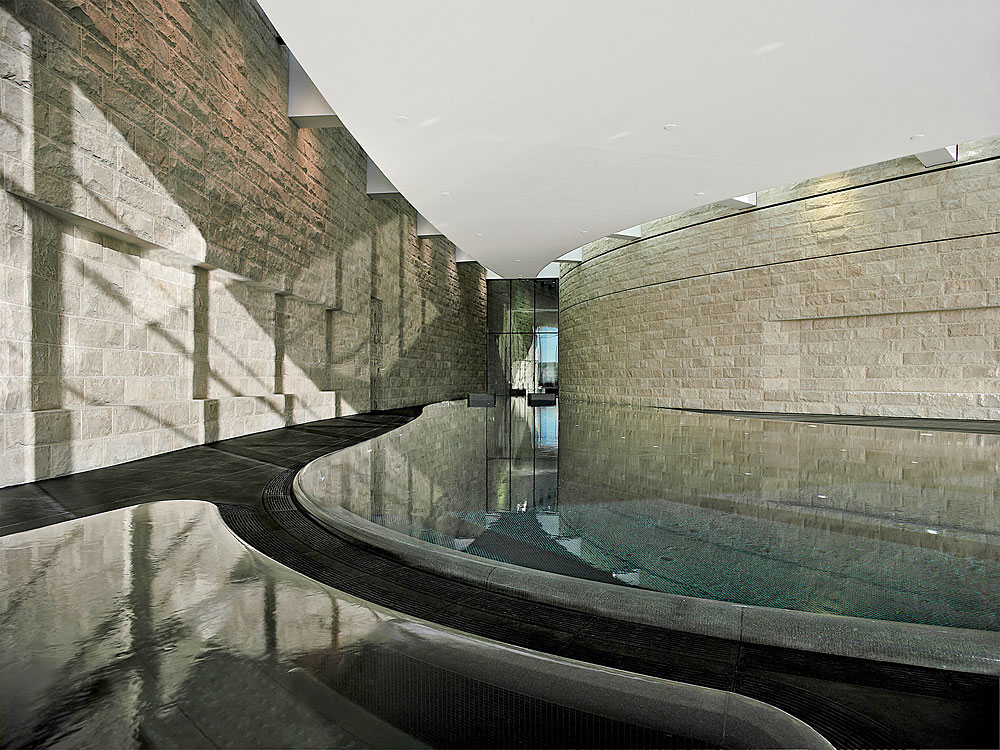 My authentic moor mud massage did not begin as I envisioned it would. The itinerary I received when I checked in to Zurich’s Dolder Grand resort stated that my scheduled treatment was “by Kerstin Florian,” which, to a novice spa-goer, naturally meant that a blue-eyed masseuse with a Nordic accent would soon be lathering me with wet dirt. I was somewhat surprised, then, to meet Holger, a muscle-bound German who nearly crushed my fingers as he shook my hand and introduced himself as my masseur.

Florian, it turns out, is a Swedish-born Californian who produces skin-care products and creates treatments used in spas around the world. Holger is one of the therapists who administer Florian’s treatments at the Dolder Grand, a historic Swiss resort that reopened in April after a four-year hiatus.

The Dolder Grand first opened as a hotel and kurhaus (health spa) in 1899, on a hilltop overlooking the Lake of Zurich. With its towers and turrets, banquet halls and ballroom, the Fantasyland-like retreat soon became a requisite stop for affluent foreigners and a gathering place for Zurich’s elite. But the hotel’s gradual expansion—including an unsightly wing added in the 1960s—and eventual deterioration knocked the palace on the hill from its perch in Zurich society.

Swiss financier Urs Schwarzenbach acquired the Dolder in 2001 and, after closing it in 2004, invested $400 million to revive the landmark. He enlisted London architect Sir Norman Foster, who ordered the removal of all buildings that had been added since 1899. Foster then designed two striking contemporary wings, which today wrap behind and below the original structure like gleaming glass-and-steel girdles.

Inside the buildings, evidence of Schwarzenbach’s sizable investment—silver-plated walls in the formal restaurant, handpainted wallpaper in the $13,500-per-night Maestro Suite—appears at every turn. “Everywhere you go in the hotel, it reeks of quality,” says Sylvia Sepielli, the Sedona, Ariz.–based designer of the resort’s spa. “The doors, the windows, the blinds—every single thing you touch is high-quality.”

Sepielli’s spa likewise shows no signs of skimping. “This is the only project I’ve ever worked on where everything I wrote in my concept brief was executed,” says the designer, whose other creations include Mii Amo in Sedona and the Mauna Lani Spa in Hawaii. The Dolder was Sepielli’s first project in Europe, where spa-goers are often more easygoing than their American counterparts. Dress codes in many of Switzerland’s coed saunas consist of a hand towel and flip-flops, at most. But the Dolder—perhaps to appease Americans—requires that you enter common areas covered in at least a Speedo.

Within its coed section, the spa features a mosaic-tiled pool, two hot tubs, a sauna, and a steam bath. Guests can cool down in a snow room and heat up again in one of five tsunaburos, or pebble loungers. Sepielli based the loungers, which are essentially bathtubs filled with heated stones, on a tradition she observed while living in Japan. “In Kyushu, thermal vents come up at the seaside, and they have places where you can dig up the sand and cover yourself in it,” she explains.

While reclining in a tsunaburo, I watched through floor-to-ceiling windows as dark clouds filled the sky above the lake. When it was time for my massage, I followed Holger to a treatment room, where he covered me with clay, wrapped me in plastic, and zipped me up in what appeared to be a body bag.

Holger eventually extricated me from the bag before blasting me clean with a multiheaded shower and then applying Florian’s skin-care products to my torso and face. As I rose from the table, my skin—much like the Dolder Grand—felt revitalized, shiny, and new.