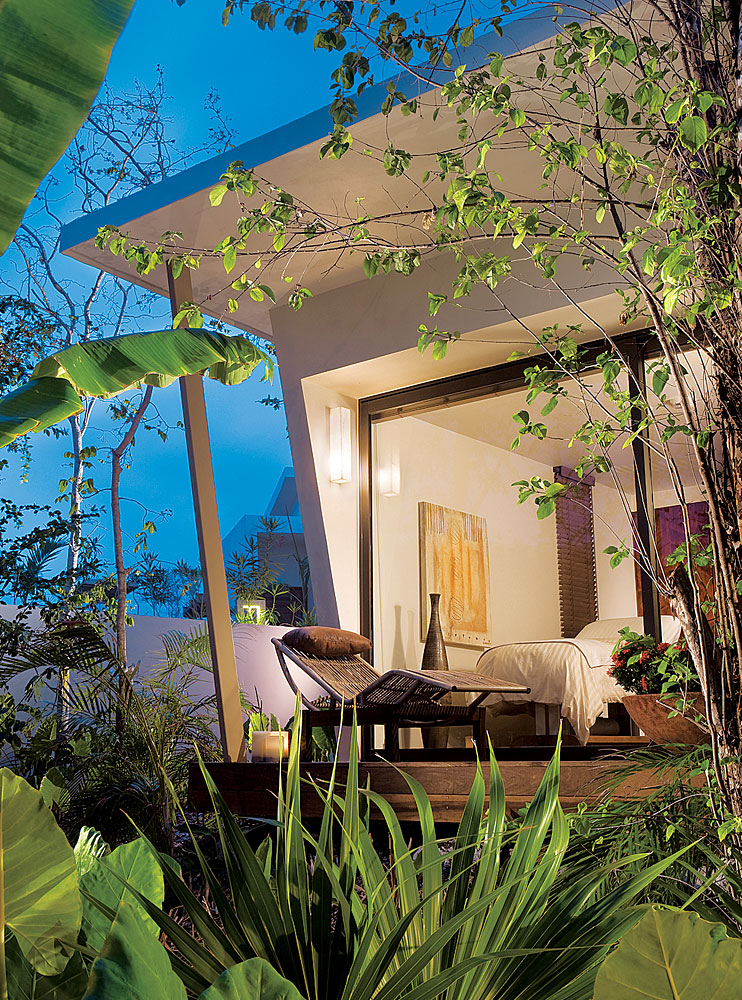 Every visit to a Sense spa begins with tea. At Rosewood Mayakobá, on Mexico’s Riviera Maya coast, arriving guests drink chaya tea with lemon juice. Attendants at the Carlyle, a Rosewood Hotel in Manhattan, offer spa-goers a strawberry-and-mint-infused concoction. And at CordeValle, a Rose­wood Resort in Northern California, a self-serve bar in the tea lounge features a Meyer lemon–and-ginger blend. These welcome beverages, however, are the only obvious traits shared by the Sense facilities—which is exactly what Rose­wood Hotels & Resorts intends with its new line of spas.

The Dallas-based Rosewood group introduced its Sense brand last spring, with the opening of a spa at the then-new Mayakobá resort. The company has since opened three additional Sense spas, each of which—like the Rosewood hotels themselves—reflects its surroundings. “When you go to the Sense spa at the Carlyle, you’re going to find a completely opposite approach than you would at Mayakobá,” says Rosewood COO Bob Boulogne. “But when you get there, you’ll be offered a welcome beverage, and you’ll be greeted with the same service.”

Sense spas also have in common some basic equipment—Boulogne cites the treatment beds as examples—but service and protocol are the underlying themes that bind the properties. “The Sense concept is about focusing on the little details,” says Kelley Patrick, spa director at CordeValle. “They’re the details you may not even notice, but at the end of the treatment you think, ‘That was the best massage I’ve ever had.’ ”

Opened in September, the cumbersomely named Sense, a Rosewood Spa at CordeValle, is set within a Californian-Tuscan-style structure shaded by oak trees and adjacent to the golf resort’s swimming pool. CordeValle shares its 1,700-acre site in the Santa Cruz Mountains with the Clos LaChance winery, and several of the spa’s offerings—including a grape-seed-and-cherry-bark scrub—incorporate vinotherapy techniques. Still, says Patrick, the spa focuses on fundamentals. “You can have a great menu of services,” she explains, “but most people still just want a 60-minute classic massage.”

Emma Darby, the spa director at Rosewood Mayakobá, likewise strikes a balance between simplicity and individuality. “You go some places, and the spa menu is so extensive that it’s confusing,” she says. “We keep it simple: five pages, five treatments per page.” Some of Darby’s treatments, however, are anything but basic. “We’re in the Mexican Caribbean, so we’re introducing some chocolate, tequila, and lime treatments to give us more of a sense of place,” she says. “We’re adding a treatment where we’ll use a smooth cactus paddle to put an exfoliate on your back, then wrap you in chocolate and gold. You’ll walk away with a shine and smelling like a golden chocolate bar.”

Rosewood Mayakobá’s setting on Mexico’s Caribbean coast informs more than the treatment menu. The 128-suite resort—part of a 600-acre development south of Cancún that also includes Fairmont and Banyan Tree hotels, as well as a Greg Norman–designed golf course—stretches inland from the ocean, through a mangrove jungle, and along a lagoon. The spa is set on an island within the lagoon, and guests access the facility via the Puente del Balneario (which translates to the less romantic “Spa Bridge”). Wood-plank trails lead to the 12 treatment suites and to one of the region’s many cenotes—deep limestone pools that were sacred to the Maya. The island also includes eight two-story guest accommodations with private docks, as well as a traditional Mayan sweat lodge where a shaman uses hot stones and herbal aromas to, according to the menu, “wake up ancestral memory and guide you back to the womb of Mother Nature.”

The shaman sweat-lodge ceremony is, understandably, not an option at Rosewood’s hotel in Manhattan. Instead, the Carlyle’s Sense spa, which opened in October, includes such features as an Yves Durif hair salon and a Kohler DTV shower that bathes guests not only in water but in multicolored light displays as well. The two-story spa’s interiors incorporate dark woods, crystal chandeliers, a platinum-tile-lined stairwell, and other accents designed to reflect the 1930s-era hotel’s Art Deco–style facade and lobby.

Rosewood also opened a Sense spa last year at the company’s Little Dix Bay resort in the British Virgin Islands. This April the group will unveil its fifth Sense facility, a 17,000-square-foot, 13-treatment-room spa at the new Rosewood Sand Hill in Menlo Park, Calif. The hotel, located a mile from Stanford University, has yet to determine the spa’s welcome beverage, but, in keeping with Rosewood’s sense-of-place philosophy, it is bound to be a smart choice.