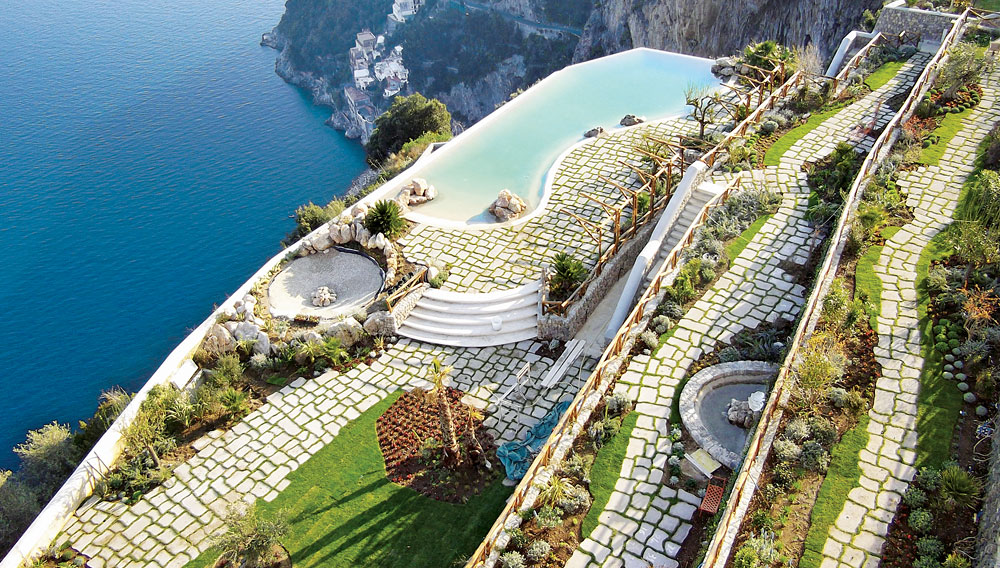 The cavernous reception space at the Monastero Santa Rosa’s spa is perfumed with the signature potpourri of Santa Maria Novella. The Florentine apothecary, officially known as Officina Profumo-Farmaceutica di Santa Maria Novella, was founded in 1612 by Dominican friars who made healing tinctures and potions from the plants and flowers grown in their monastery’s gardens in Florence. Four centuries later, the company’s artisanal products are available at only two spas in Italy. In Monastero Santa Rosa, the apothecary has chosen a historically apt—and stunningly situated—new partner.

Opened in May on a coastal cliff between Positano and Amalfi, Santa Rosa occupies a former Dominican monastery that, like Santa Maria Novella, dates to the 17th century. The property had been operating as a hostel before an ambitious American purchased it in 2000, gradually restoring the landmark and transforming it into a 20-suite luxury hotel and spa. From its perch above the Gulf of Salerno and the quiet town of Conca dei Marini, the hotel cascades down four levels of terraced gardens, which include an infinity pool. The original monastery building contains the guest rooms and the property’s exquisite four-treatment-room spa.

Monastero Santa Rosa has a history in wellness: Like the Dominican friars in Florence, the Dominican nuns at the Santa Rosa monastery made their own tinctures during the 1600s. The hotel’s spa is set within the monastery’s original walls, which have been restored using Jerusalem stone and sand-finished concrete. Guests spend time before and after treatments in a double-height tepidarium (a warm, marble-tiled room that harks back to the Roman baths), where they enjoy heated mosaic loungers and whirlpool footbaths scented with Santa Maria pomegranate bath salts. Rounding out the common areas are a coed steam room, a rock sauna, a Hydro Pool, and an Emotion Shower (equipped with LED lights and settings such as Tropical Mist, which yields spritzes of mango and passion fruit).

The most requested treatment at Monastero Santa Rosa is perhaps the most fitting for its setting. During the 80-minute Candle Massage, Santa Maria’s plant-oil-and-emollient-butter candle is melted down at body temperature and then poured onto the body before being buffed and massaged into the skin.