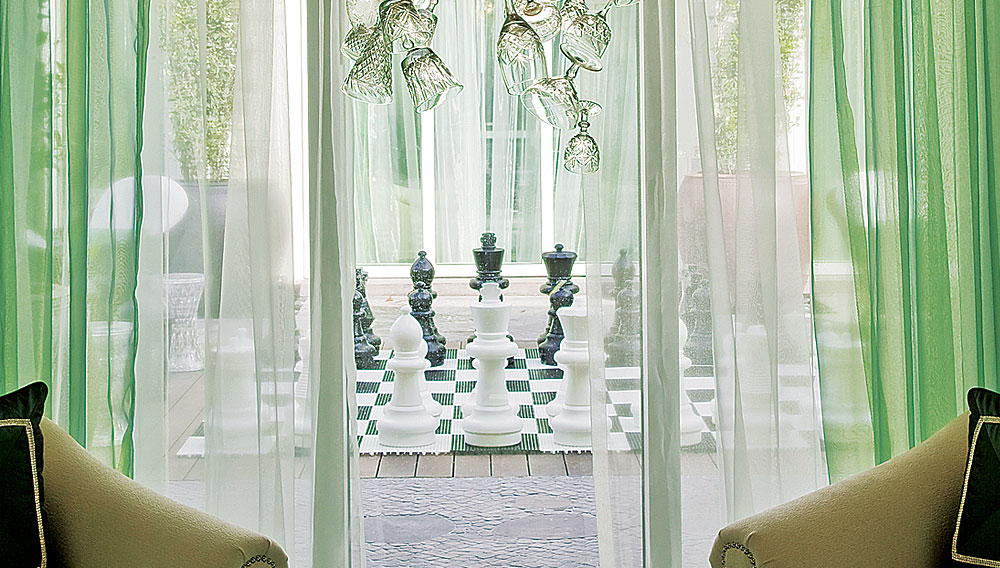 At the new Eau Spa at the Ritz-Carlton, Palm Beach, you will find something called a MENu, which, instead of listing low-calorie appetizers and entrées, offers icebreakers—questions intended to promote conversation between you and fellow guests. “What is the best sports comeback of all time?” reads one entry. “If you were a superhero, what power would you have and why?” asks another. You might share your views on, say, the 2004 American League Championship Series and X-ray vision, or just silently ponder the answers. Even if the exercise is not Zen, it would at least be meditative.

“It’s all about having fun,” says Ayelet Rahav, creative director for Eau Spa. “We’re not trying to be holistic; that would be ridiculous in this part of the world.”

Indeed, holistic would not suit Palm Beach, a city that has long embraced glitz, glamour, and indulgent fun in the South Florida sun. So it makes sense that a collection of bobblehead superheroes, presidents, and cartoon characters decorates the men’s whirlpool area at Eau Spa, while the whirlpool in the women-only wing is adorned with wire birdcages and yellow rubber ducks.

At the center of the spa is a 13,000-square-foot garden, where you can sip Champagne, snack on cupcakes (not nuts and raisins), and play outdoor chess with giant pieces while awaiting a platinum facial. (Platinum is “especially good for the chakras,” says Rahav.) Or you can dip your toes in the water while lounging for hours in a basket chair that hangs above a shallow reflecting pool.

Eau, which opened in March, takes its name from the French word for water. And like any superior spa, this one abounds with water-related features: fountains, saunas, rain-forest showers, and even a waterfall that provides a shoulder massage when you sit or stand under it. However, Rahav says the name was selected for a reason other than the apparent one. “We wanted people to go, ‘Oh!’ ” she explains, adding that by Oh she means an expression of surprise and delight.

Equally delightful is the spa at the Four Seasons Resort Palm Beach, located a short drive from the Ritz-Carlton. But the spa’s main attribute might be its lack of surprises; many of the Four Seasons’ staff therapists have been practicing their craft here for nearly two decades. Now, however, they are doing so in a new, spacious facility: Last winter, the resort replaced a parking garage with an 11,000-square-foot spa with 12 treatment rooms.

Lead therapist Patrick McElhenney recalls the resort’s original spa, which opened in 1989 during that decade’s aerobics craze and before people were what he calls “spa smart.” The original spa “had five rooms and was, for the time, state of the art, with a sauna, steam room, and whirlpool,” he says. “As women became more athletic, they began to request massages. I think men started noticing that women were looking good, and they eventually caught on.”

Where Eau is whimsical, the Four Seasons spa is understated, especially by Palm Beach standards. The decor displays a contemporary Asian theme that blends marble with blond and dark woods and nickel and bronze accents. “When people walk in they say that it feels like they’re inside a pool—that feeling of floating,” says McElhenney. “It instantly relaxes people.”

At Eau, the atmosphere is both relaxing and relaxed, although you may confront at least one pressing matter: The MENu wants you to name the world’s fastest production car.