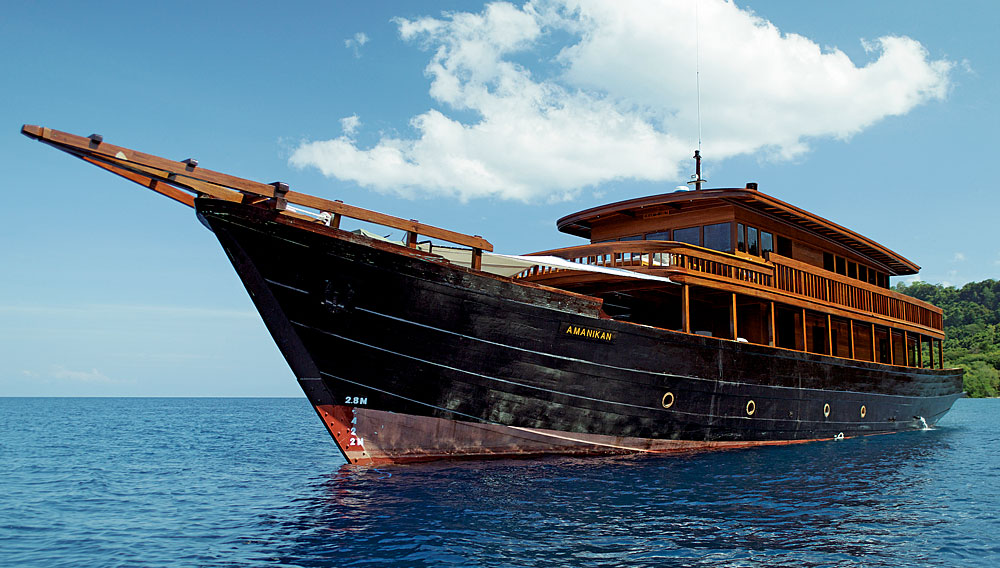 Komodo National Park in Indonesia is considered a holy grail of scuba diving, not only for its more than 1,000 species of exotic fish, but also for its relative inaccessibility. Located some 200 miles east of Bali, the 450,000-acre park—which is nearly 70 percent ocean—encompasses volcanic islands, isolated beaches, and pristine coral reefs, but not a single hotel.

Visits to Komodo National Park, which is accessed from the rough-and-tumble town of Labuan Bajo, on the island of Flores, traditionally have been limited to day trips or multiday excursions on a boat with several other divers. Now, however, there is a third and infinitely more appealing option: a private expedition aboard a custom-built yacht operated by Singapore-based Amanresorts.

Launched last July, Amanikan is a 105-foot cruiser modeled after an Indonesian phinisi schooner. The boat, which hosts no more than two couples at a time, features an ironwood hull from Borneo, teak decking and bangkirai paneling from Java, and furniture from Bali. Its three cabins are consistent with the standards of an Amanresorts suite, and its crew of 10 includes a dive instructor and two chefs.

Amanresorts offers Amanikan as part of the Amanwana Komodo Expedition package, which comprises five nights aboard the boat plus two nights at the Amanwana resort on nearby Moyo Island. (Trips run from late March to the end of October, and prices start at $22,300 for one couple and $27,100 for two couples.) The journeys begin, like most trips to Komodo National Park, in Labuan Bajo, but the similarities between Amanikan and other live-aboard boats end there.

Tides permitting, Amanikan guests can dive and snorkel whenever they want, unbothered by other divers’ bubbles. Meals, likewise, can be enjoyed anytime and anywhere, including on one of the area’s many beaches, where the only footprints you might find are from macaques and the park’s namesake dragons, which can reach 10 feet in length.

Of course, the main attraction for divers in Komodo National Park is the marine life. The water that flows between the Indian Ocean and the Flores Sea carries large amounts of nutrients, which attract a variety of species. Dive sites with names like Gili Lawa Laut and Castle Rock begin between 60 and 80 feet deep and yield hour-long cavalcades of sweetlips, giant trevallies, triggerfish, batfish, barracudas, and fusiliers. Blue-spotted stingrays and blacktip sharks occasionally interrupt this show as they glide through the seascape. “Beneath the water, Komodo’s a Garden of Eden,” says Kevin Brooke, manager of Amanwana. “[With Amanikan], the sea is yours.”

Amanikan returns to Amanwana at the end of each journey. During their two days at Amanwana—a camp of 20 luxury tents on Amanwana Bay in the Flores Sea—guests can unwind from the trip by hiking in monkey-filled forests, lounging on the beach, relaxing in the spa, or, for die-hard divers, continuing to explore Indonesia’s exotic reefs.