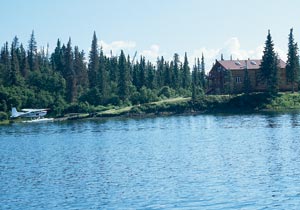 Seated in the steamy confines of a rustic sauna, Kentucky small-batch bourbon in hand, the angler recounts to his cohorts highlights of a three-day float down a remote Alaskan river. Between sips, he describes steep gorges cut by the river’s incessant torrent, bald eagles soaring overhead, narrow canyons where glacial waters flow into deep pools and spill out again in a rush of white foam, and the occasional brown bear foraging for early summer sustenance. And yes, he also speaks about the fishing.

To hear him tell it, huge rainbow trout can be found in every pool—enough fish measuring on the right side of the 20-inch mark to keep him busy for all 20 hours of summer daylight. There was that one trout that, in the heavy current, slammed his purple leech pattern before shooting out of the water like a Polaris missile. Another, in the pool alongside the first night’s campsite, arced his three-weight. And, in a tailout, there were the three that he took on consecutive casts on a black bunny.

Such fish tales—all of them true—are common fodder for conversation among guests at Bob Cusack’s Alaska Lodge. Located on the shore of Iliamna Lake at the northern end of the Alaska Peninsula, the lodge lures guests to a region offering some of the world’s best rainbow trout and Pacific salmon angling. Cusack, who has guided fly-out fishing trips here for more than three decades, knows the land, the people, and the creatures of this part of Alaska better than most, affording him and his guests access to some of its most remote and pristine fishing spots.

Although the lodge is a comfortable wilderness haven with excellent food, entertaining conversation, and the invigorating Alaskan-style sauna, no one journeys to the Alaska wilderness to be pampered. Most come here to fish, and you can spend nearly all of the lengthy subarctic days doing just that. Visits to Cusack’s Alaska Lodge are only as regimented as the angler wishes. Unlike most lodges, there is no set schedule, no stream rotation, and no assault en masse on a single river with a half-dozen or more anglers. Cusack manages his bookings—a maximum of eight guests at any time—to ensure each guest receives attentive service. Most of the angling in and around Iliamna is fly-out, and Cusack’s 30-year flying record is spotless, which is unheard-of for such a long period in the airspace over the Alaskan wilderness.

The angling season runs from June through October. Early in the season, prior to the salmon runs, rainbow trout are the primary target. Once the sockeye appear, usually around Independence Day, anglers can divide their time between feisty rainbows and hefty salmon. In August, silver salmon begin to arrive in the area’s coastal streams, and from September through the end of the season, trout fishing is at its peak. With plenty of food in the water (in the form of other fish and fish eggs), the trout grow quickly, as evidenced by the many 10-pounders landed every year. While most lodges shut down in September, Cusack’s operates into the 10th month if weather permits, rewarding the heartiest anglers with the fattest trout of the season.