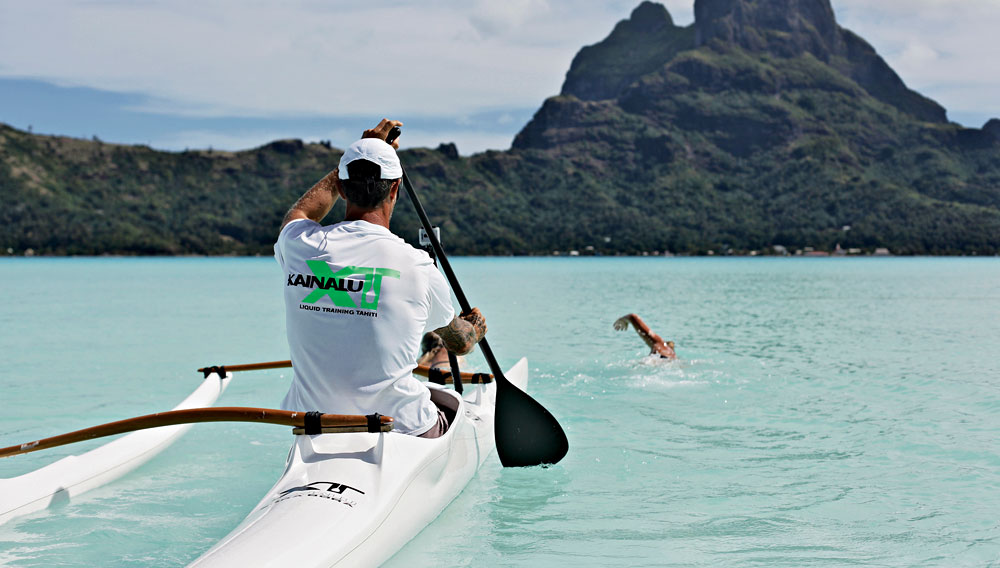 As my one-man outrigger canoe capsized in the Bora-Bora lagoon, I remembered the first rule of Kainalu XT training: Respect the water. I had gone into the paddling session with the mind-set of an experienced kayaker—overconfident and in control, rather than attuned to the subtleties of an unfamiliar canoe in unknown waters. Even in the relatively calm turquoise lagoon, the waves quickly, and unforgivingly, exposed my mistake.

My Bora-Bora baptism came on the first of three days I spent in French Polynesia with Kainalu XT and company co-owner Stephan Lambert. Kainalu XT, which the French expat founded with a California-based partner last year, provides challenging training experiences for novices on up to world-class athletes in the disciplines of long-?distance swimming, ocean-canoe racing, and stand-up paddleboarding, all against the epic backdrop of Bora-Bora.

Lambert moved from Hawaii to Bora-Bora 10 years ago to focus on his passions for water sports and Polynesian culture. Tattooed and deeply tanned, the 42-year-old trains each of his Kainalu XT clients in at least two disciplines. (The XT in the company’s name stands for “cross-training.”) The outfitter’s custom programs—priced from $250 for one hour of personal water-sports training to $8,900 for a 10-day interdisciplinary training regimen—are designed to elevate clients’ all-around performance and include personalized, concierge-like services such as prescreenings that assess fitness and skill levels.

At 7 am on the first morning of my trip, I walked out from the Four Seasons Resort Bora Bora—located near some of Kainalu XT’s favorite training areas—and headed to the hotel’s dock, where Lambert picked me up in a motorized outrigger. My quest was to become proficient in stand-up paddleboarding, but the board would have to wait: Lambert started me with an hour of swimming instruction in the lagoon, correcting my strokes and forcing me to think differently about how to move in the water. Rule number two, Have a passion for training, inspired the two hours of paddling drills that followed, focusing on the shape of my arms above the water and the efficiency of my stroke under it. Later that day, when I found myself underwater—after capsizing the canoe—Lambert coached me back onboard, and I proceeded to cover 9 miles without another hitch.

After three days of Kainalu XT training, I was able to paddleboard confidently on the tranquil lagoon and in more challenging conditions near the outer reef. Heading to the reef on my last afternoon, I witnessed a sunset burnishing the volcanic spires of Bora-Bora’s Mt. Otemanu and recalled Lambert’s third and final rule: Reward with relaxation.