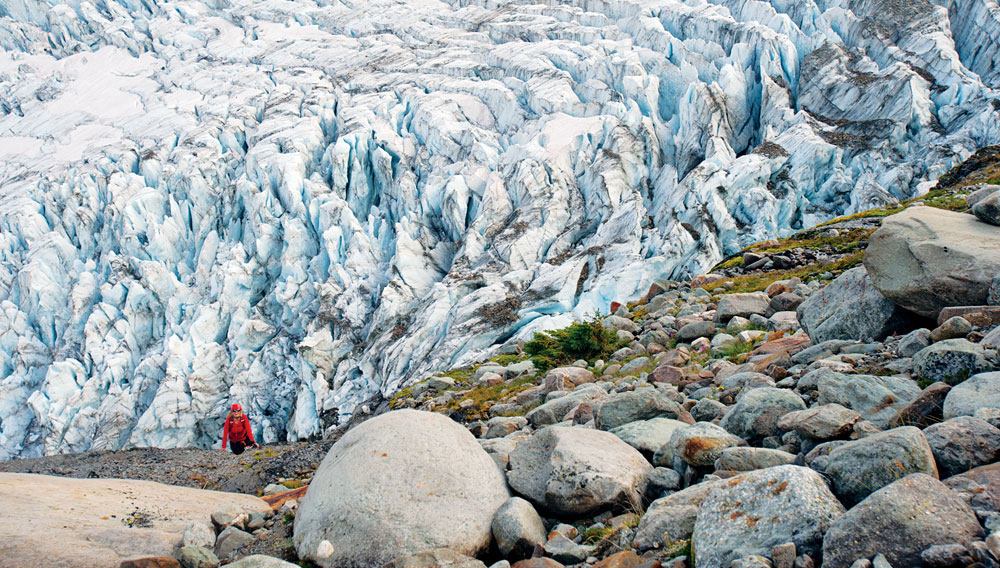 I am stuck in the “cat on a screen door” position, some 2,000 feet above British Columbia’s Conrad Icefield. A common mistake of rookie rock climbers, the pose has me flattened, spread eagle, against a smooth, 75-degree rock face, white knuckles gripping the steel cable from which my existence hangs. Glacial blue spires crack and hum below me as my body freezes in panic.

Carla Demyen, a guide for CMH Heli-Skiing and Summer Adventures, eventually comes to my rescue, prancing along the slender ridge of the Traverse of the Gods as if on an afternoon stroll. Her first concern is for my pants.

“They’ll tear if you continue on like this,” she says.

The observation is just unexpected enough to allay my fear. With renewed courage, I follow her commands—put your foot here, grab that rock there—until I reach even terrain. Safely situated on a cliff overlooking the snowcapped Selkirk Mountains, I furiously gulp water while waiting for my knees to stop trembling before our next ascent.

Such adrenaline-pumping moments are to be expected on a CMH journey. The adventure travel company, which is credited with inventing heli-skiing and heli-hiking, has been dropping guests on eastern British Columbia’s most remote slopes since 1965. In 2008, CMH expanded its summer High Flying Heli-Adventures program beyond simple hikes with its first via ferrata (Italian for “iron road”), a series of rungs and cables that allows adventurers with a thirst for climbing, regardless of experience, to ascend the 9,000-foot Mount Nimbus. Late last season, the outfitter unveiled its follow-up via ferrata: the Conrad Glacier Experience. A veritable obstacle course in nature, the daylong excursion combines zip-line crossings, tightrope cable walks, rock-wall climbs, waterfall traverses, and traditional mountain hiking.

“With the Conrad adventure, you get to go to places that even a lot of climbers don’t experience,” says Bruce Howatt, area manager at CMH, and one of the creators of the Conrad Glacier Experience. Nonetheless, Howatt insists the route does not require participants to possess mountaineering skills—courage and determination notwithstanding.

Available in July and August, the three-night, $2,640-per-person Conrad Glacier trip includes helicopter transfers, meals, and accommodations at CMH’s 24-room Bobbie Burns Lodge, which features a spa for massage and whirlpool therapies and a wine cellar for more potent remedies. Before I can celebrate, however, I have to complete the via ferrata course.

My uneasy scramble across the Traverse of the Gods is but a blink before the looming wall behind me beckons. Clipping my harness into the safety cable, I focus first on climbing the via ferrata rungs like a ladder. Soon, the rungs grow farther and farther apart, forcing me to find tiny fingerholds and toeholds in the mountain’s natural grooves. But my concentration does not betray me this time, and only when I see CMH’s helicopter waiting along a broad ridge beyond the cliff do I realize I have reached the top.

Elated, I overcome my fear of looking down, peering over the cliff’s edge at Conrad’s massive ripples shimmering in the late afternoon sun. My pants and I have survived the climb intact.