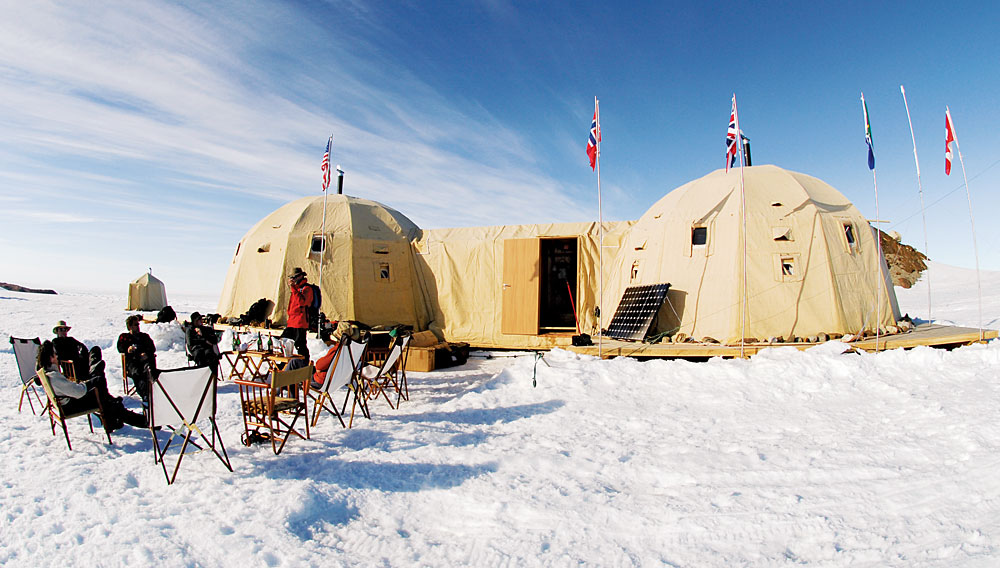 Every year, Gail Nissly and her husband, Everett, take an adventurous journey far from their Cincinnati home. The couple—ages 60 and 70, respectively—have white-water rafted from Alaska into the Arctic Ocean, hiked the Mont Blanc circuit, dogsledded above the Arctic Circle, and scaled Kilimanjaro. But it was in Antarctica, on a trip last November with adventure-tour company White Desert, that Gail confronted one of her biggest fears.

After hiking in crampons for several hours against high winds, Nissly was informed by her White Desert guide that she would have to zip-line over an upcoming stretch of icy terrain. “I said, ‘What if I don’t want to do this?’ ” recalls Nissly, who is afraid of heights. “He said that I could walk back to camp.”

Nissly knew that her trip with White Desert would not be for the fainthearted. She first heard about the polar-exploration company in 2008, shortly after it launched with the aim of changing the way people experience Antarctica. While existing companies offered cruises to the continent (of the 37,858 tourists who visited Antarctica in 2009, all but 273 arrived by boat), White Desert was the first to offer luxury fly-in trips to the interior.

English adventurer Patrick Woodhead founded White Desert in 2007, three years after he first traversed Antarctica. Woodhead, now 34, skied as many as 50 miles per day on his initial journey and maintained his caloric intake by supplementing meals with blocks of butter.

The Nisslys embarked on their journey last November after being delayed several days in Cape Town, South Africa, due to bad weather at their destination. White Desert’s chartered jet finally landed on an ice runway in Nova, Antarctica, where a Russian World War II tank carried the couple and their 10 cotravelers eight miles to their home base at the company’s Whichaway Camp—six heated sleeping tents, a tented main living area, and wash tents atop a 200-foot ice cliff.

During daily hikes through ice caves, around lakes, over jagged mountain ranges, and across crevasses, the Nisslys quickly learned how to use ice axes, walk “like ducks” wearing crampons, and layer clothing. “Of all the trips we’ve done, this was the most physically demanding,” says Nissly, who adds that her favorite part of the trip was cross-country skiing and trying things she had never done before—like zip-lining. White Desert can also incorporate into the trips extreme experiences such as rock climbing, kite skiing, BASE jumping, and paragliding. Some of the company’s clients have even set world records—including the first solo balloon flight in Antarctica and the southernmost swim—while traveling with White Desert.

“They were not your run-of-the-mill group of people,” says Nissly of her traveling companions. “This kind of adventure attracts people who either know no fear or who are willing to deal with their fears.”